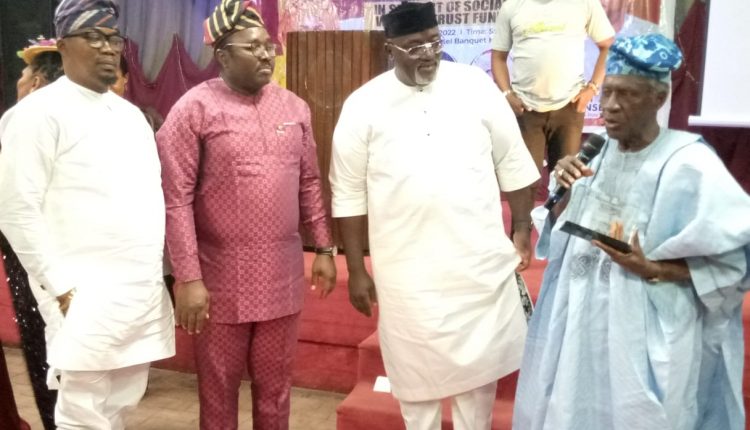 Presenting the award to Governor Seyi Makinde on Friday evening at a gala/award night held at the banquet hall of Premier Hotel, Ibadan, the Chairperson, Oyo state Community Chest Council and Founder, Sola Olagunju Foundation, Ambassador (Dr) Olusola Olagunju, who is also a recipient of the award, described the Governor as a friend of the less privileged in the society.

A member of the House of Representatives, Honourable Stanley Adedeji ‘Odidiomo’ representing Ibadan North West/South West federal constituency at the national assembly, and the state Assembly lawmaker, Hon. Olawumi Oladeji representing Ogbomoso North state constituency who also bagged awards for their commitment and service to humanity commended the organizers of the event for their selflessness and ‘missionary’ works in the society.

Earlier, retired Arch Bishop Ayo Ladigbolu who was the keynote speaker rendered a special rendition as a gratitude to God for witnessing the administration of Makinde which he likened to that of former governor, late Lam Adesina, saying “I have found similarities between the Engr Oluseyi Makinde’s administration and that of late Alhaji Lam Adesina, which I consider more to have arisen from divine design rather than mere coincidence.”

Speaking further after receiving the outstanding performance award on behalf of Governor Makinde, Arch Bishop Ladigbolu said, “Alhaji Lam Adesina and I were good friends before he was elected governor, we both shared common passion for the poor, the disabled, and the untouchables in the society. This concern led to the founding of a NGO known as New Generation Foundation for Disabled.

“The foundation had a number of outreaches both within and outside Ibadan and in other areas of the state responding to the needs of the hungry, homeless, drug addicts, the insane destitute, orphans and widows. We hosted one of the largest awareness gatherings on welfare and disability concerns at the House of Chiefs chambers in 2017.

“Governor Oluseyi Makinde’s devotion and commitment to charity was popularized by his ‘Omituntun Foundation which touched millions of lives in and outside Oyo state. The Omituntun foundation responded quickly and effectively to numerous human needs and wiped away tears from numerous eyes. It was indeed filling many gaps left untouched by government and other charity organizations.”

While joining others to call on government especially the state house of assembly to expedite action creating a legal framework for the creation of a Social Welfare Trust Fund, Arch Bishop Ladigbolu said, “it is common knowledge that a social welfare trust fund offers assistance to individuals and families in need to alleviate the negative impacts of inadequate state provisions.

“As an institutional support programme, such fund are managed by the state chest council or any other government approved bodies. The most common type of programmes provide benefits to the elderly, or unemployed, the sick or invalid, and independent survivors.”

Speaking earlier, the Special Assistant on Community Relations to Governor Seyi Makinde, Hon. Olufemi Josiah whose office was among the co-organizers, maintained that the present government of Seyi Makinde has shown the expected commitment and political will towards advancing humanitarian course in the state.

“Each time I move around town and see drug addicts, homeless youths, and people living with disabilities exposed to different degrees of dangers while struggling for survival I weep bitterly inside. I weep because if we had the right government institutions that are working these challenges should not be there in the first place. This feeling makes me conclude that the life of the poorest persons is a reflection of who the richest people are in the society.”

Josiah, who maintained that the first religion created by God himself was the religion of human and that that other religions were creations of men, however, called for deliberate action plan and policy direction that immediately address the societal inadequacies in terms of access to the state commonwealth. He also joined other speakers to call for the creation of legal framework that will serve as the foundation upon which Social Welfare Trust Fund initiative can be built.

Hon. Stanley Adedeji ‘Odidiomo’, while speaking with journalists shortly after receiving his award and announced the donation of 1 million naira to support the Social Welfare Trust Fund, commended the organizers efforts. He noted that many privileged members of the society like himself have been committed to philanthropy even before becoming an elected public official adding that more would have been achieved at the NGO level if there were more genuinely sincere and committed bodies like the Community Chest Council.