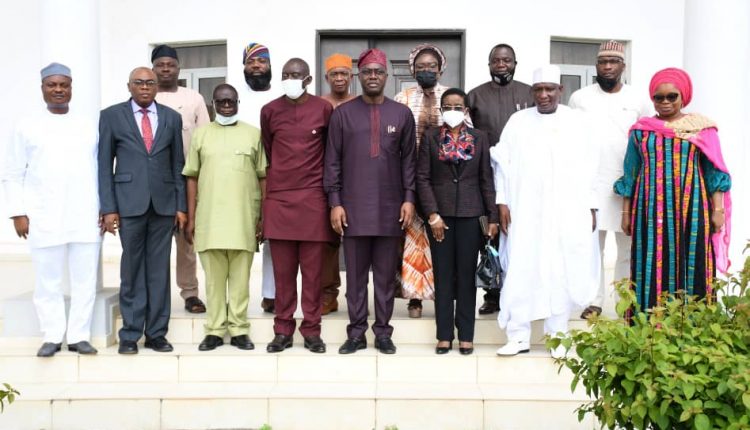 Oyo State Governor, ‘Seyi Makinde, said on Friday that his administration will continue to support security agencies operating in the state to deliver on their mandates.

Makinde, who stated this at the Government House, Agodi, Ibadan, while receiving State Directors of the Department of State Services in the South West States, who were in the state to hold the South West Zonal Conference of Directors of State Services, said that security is key to the successful implementation of government policies.
The governor praised the team, led by its Chairman, Sheikh Mohammed Waziri, for helping to tackle insecurity in all the nooks and crannies of the country.

He said: “We welcome you to Ibadan and I am glad that the conference went very well. You were able to interact and identify some of the security challenges within the geopolitical zone.

“I am also happy that from your interaction, you have been able to come up with the fact that drug abuse and children in primary school becoming cultists is common. Yes, we can go after them just like you have suggested.

We can win the war with brute force but can we win peace with the same force? For us, we think striking at the heart of what is causing all of these is Germaine. And if you trace it, it is economical. So, it is difficult to bring people to live peacefully together.

“When you have a situation where the resources are limited and we are all scrambling for it and we are not baking enough cake to go round, then there will always be serious issues where people will look for where they can gain a little bit of an advantage over the other people.

So, I will ask that in your recommendations and course of action, let us also look at how we can win the peace.

“And on this issue, I give you the assurance that when we have the South West Governors meeting, I will bring it up so that we can have a common regional approach to dealing with the challenges.

“Also, I am glad that you mentioned cooperation between yourselves, the government and among the other security agencies. Yes, it is normal to have inter-agency rivalry but what has worked for us is how we worked together as a team here.

“Even the state-owned security network, Amotekun, was pulled in and they work together. “So, we want to focus a bit more on cooperation between other agencies operating within the geo-political zone.

“For us as an administration, we know that the essence of power and all of these things that we are surrounded with is to ensure that people are able to live their dreams and go about their daily businesses in a safe and secure atmosphere.

“I want to use this opportunity to thank you very much because we know that while we are sleeping and enjoying ourselves, you are on the edge and all over the place trying to ensure we sleep with our two eyes closed.

“Thank you for all the hard work you are putting in to ensure that we can sleep. We are indeed very grateful. The least we can do is to give you support and we will continue to support you.”

The governor also charged the DSS to ensure it emphasizes issues that will unite Nigeria, adding that the country has never been this divided.

He said: “I will say that the country is passing through a unique and difficult period. We are faced with an economic issue and the issue of unifying this country. We have never been divided like this before. We are getting to a situation where the people of Osun would say they are not part of Oyo State but we used to be one state.

‘’So, we all now have a very serious role to play to ensure that we unify our people and contribute our quota to the unity of the country. It is a huge task before us at this period. I will ask that you also look at that issue.”

In his remarks, Chairman of the South West Zonal Conference of State Directors of State Service, Sheik Mohammed Waziri, said that the DSS understands the importance of security in a polity, adding that without security there would not be development.

He said: “Yesterday (Thursday) and today, we have discussed the issue of security challenges extensively in the zone in the area of crime and criminalities. We are concerned just like Your Excellency is also concerned about the increasing threat to local and national security in terms of kidnappings, cultism and famers/herders clashes.

“We are also concerned that this is also a period that all hands must be on deck to ensure that we resolve some of those issues and, as an intelligence-based organisation, it is our responsibility to identify the threats, share the concerns, and identify the criminals and miscreants within both governed and ungoverned spaces.

“Concerning the issue of cultism at the local level, we are looking at how we can reach out to stakeholders at the state and local levels to see how we can manage the perception of individuals. We want to also see how we can prosecute those that are recalcitrant in terms of addressing some of these issues.

“It is our hope that the governor will give us all the support that is necessary to fulfil our mandate.”

Three Weeks After Declaring Interest In 2023 Presidency, Tinubu Travels Out for…