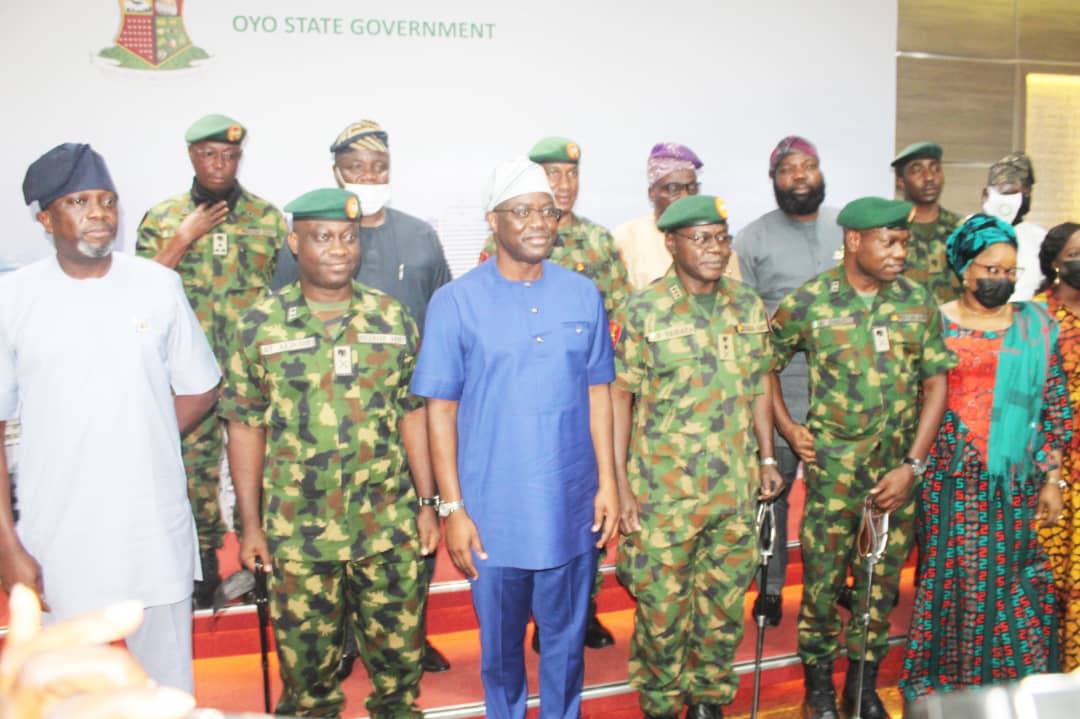 The Executive Governor of Oyo state, Engr Seyi Makinde on Monday hosted the Chief of Army Staff, Lieutenant General Farouq Yahaya, who visited the Governor on a courtesy visit.

Makinde, while playing host to the Army Chief and his entourage at the Executive Chamber of the Governor’s office on Monday 23rd in Ibadan commended the Nigerian Army for their support and cooperation with the present administration.

The Governor however, appealed to the Chief of Army staff help Oyo State improve on border towns where Oyo State shares boundaries with other states

“I know it’s work that brought you this time around but I look forward to you coming back when we will properly host you.

“First, on behalf of the government and people of Oyo state, again, we want to extend our condolence to you and the Nigerian Army over the loss of your predecessor, we pray that the Almighty God will continue to be with the immediate family and we pray that such tragic incident will not happen again.

“Let me use this opportunity also to thank the GOC and officers and men of the 2 Division of for the support he has been giving to us at the state level.” Makinde said.

The Governor thanked other arms of the Nigerian Army such as the Airforce adding that without the cooperation of the GOC Oyo state would not have been able to recorded its success especially at border towns despite the vast expanse of land occupied by the state.

Makinde also expressed his appreciation to members of the ‘Operation Burst’ team whom he said are always ready for operation anytime the security agency is called upon.

“We all know the challenges that we are faced with nationally, especially with bandits coming in here and they have stayed closely with us so, I want to on behalf of the government and people of Oyo state express our appreciation to officers and men of the 2 Division.

“And again, we’ve gone through challenges where people try to stir up or stoke up ethnic tension, where non-state actor gave directive for some people to move out of the state, we all rallied round.

“We don’t do ethnic profiling here, what we do is we go after you if you’re a criminal irrespective of where they are from, we don’t care about their state of origins, their ethnic background, once we see any criminal, we go after him.” Makinde explained.

Earlier on, the Chief of Army Staff, commended Governor Makinde for his Welfarism and support for the Nigerian Army.

The visit was also part of a working visit to Oyo State to assess what is on ground in terms of personnel and military facilities.

Speaking shortly before Makinde gave his remark during the COAS visit to the Governor’s office at the Governor’s Executive Chamber, the Chief of Army Staff expressed his appreciation to the Governor for the warm reception given to the him and his entourage.

Lieutenant General Yahaya said that his visit to the 2 Division of the Nigerian Army in the state was on the occasion of the late Chief of Army Staff, Lieutenant General Ibrahim Attahiru, and also as a routine operational visit to go round commands for the purpose of assessment and also interact with troops.

“As you’re aware of the circumstance that brought me, it is on the demise of our own beloveth late Chief of Army Staff, Lieutenant General Ibrahim Attahiru and it’s usual after assuming command to round to the commands to see things first hand and interact with troops and also assess the preparedness and activities, and also appreciate their challenges with a view to addressing them.

The Army Chief explained that the Army Headquarters takes into cognisance all the kind gestures provided by Governor Makinde aimed at motivating officers and men of the Nigerian Army at the 2 Division assuring that the Nigerian Army will continue to collaborate with the government of Oyo state to provide adequate security for the people.