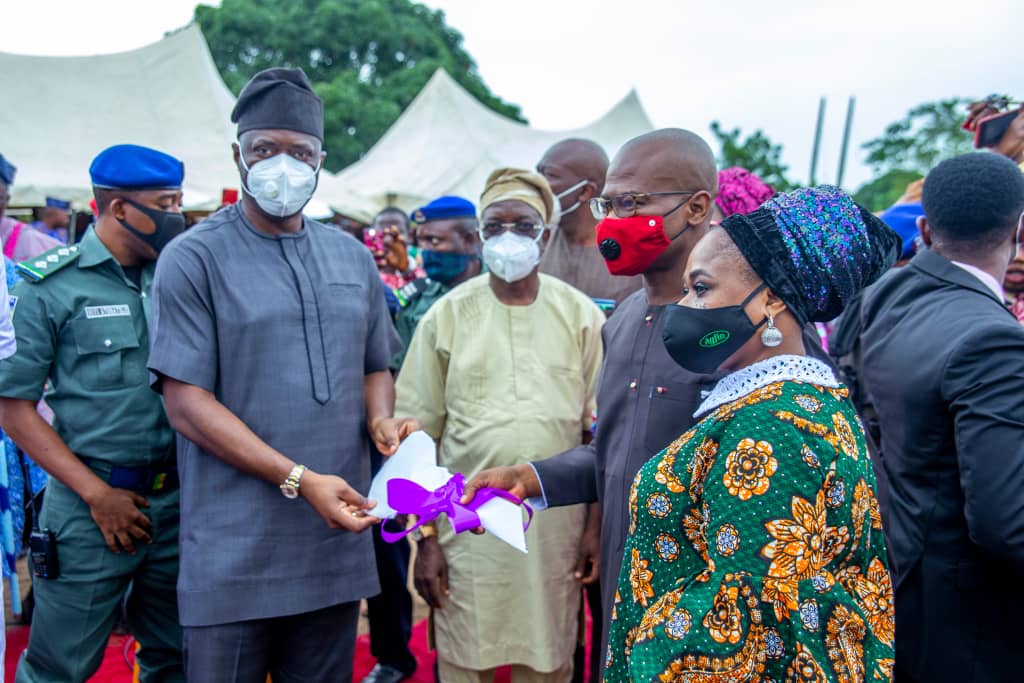 …says Oyo State is open to business
Oyo State governor, Engineer Seyi Makinde, on Thursday, officially kickstarted the process of reviving the moribund Pacesetter Fruit Processing Company, Oko, when he handed it over to AGVEST Limited.

The event, which took place at the premises of the company in Oko, Surulere South Local Council Development Area, was attended by government functionaries, traditional rulers and chairmen of all local governments and local council development areas in Ogbomosoland.
While performing the handover ceremony, Governor Makinde maintained that the revival of the company will bring economic development to the state.

He said: “I am happy to be here in Oko this afternoon. When I was in Tampa, Florida, earlier this year to preach Oyo State to the world, I stated that there are big opportunities in Oyo State and it was not an exaggeration.

“Oyo State is truly blessed with an abundance of human and natural resources. “So, our job, quite frankly, is to annex the abundant resources for the benefit of our people.”

A statement by the Chief Press Secretary to the governor, Mr. Taiwo Adisa, indicated that the Governor Makinde administration has embarked on massive resuscitation of moribund state-owned companies and other facilities through Public-Private Partnership arrangements and concessionaires.

The statement noted that the resuscitation of the Pacesetter Asphalt and Quarry Limited, Ijaiye, the handover of moribund Agbowo Shopping Complex, Ibadan, which will now be turned to a state of the art commercial real estate facility and a 4-star hotel were among some of the steps already taken by the government to expand the economy of the state.

Speaking during the handover, the governor said that his administration has been getting results in terms of economic expansion, because it has created a conducive environment for businesses to thrive.

He said: “Today, we are here to welcome another investor into our midst. We are bringing to life another company that has been moribund for almost a decade, Pacesetter Fruits Processing Limited. This company was established during the administration of former governor, Senator Rashidi Ladoja in 2007.

“However, it never commenced operation. And as I have always stated, government is a continuum and our administration will ensure that people in Oyo State benefit from abandoned or moribund projects to which the funds of the state have been committed.

“They did not use anybody’s father’s money. They used Oyo State money to set this up. So, the state must derive value from the money they have put into this.
“The state government has no business in running businesses. Businesses should be left in the hands of corporate organisations who know how to run them and make a profit. The role of government is to create an enabling environment so that more of the private entities will be attracted to the state. And this is exactly what we are doing in Oyo State. As you can see, we are getting results.

“Also, we have to be competitive and be able to bring the product out of here in a competitive manner. So, what the government will do is to ensure the road networks, electricity supply and security are worked upon so that the private companies will function better.”

The governor added that the government has been open and transparent in its activities, stating that anyone interested in doing business with the state should not shy away from applying, as the processes will always be transparent.
“I want to let the people know we are not running a ‘padi-padi’ government. I am meeting the investor for the first time here. So, you don’t need to know the governor to tap into any opportunity that exists in Oyo State.

“When they advertise, apply if you have the requirement and I will ensure that the process is transparent and fair. In this case, we have attracted Messrs AGVEST Ltd, who will be working with the Oyo State government on this project. This PPP is built on an equity structure model.”

He noted that the investor has promised to inject N350 Million into the project and that it would be completed within six months, adding that it will create more job opportunities for the people of the state.

“Like the MD of AGVEST said, they will be creating between 50 and 75 direct jobs. We will continue to encourage and support investors to come to our state. Producers of our famous Ogbomoso mango will also have indigenous off-takers for our fruits now. They will not only be producing mango juice but also cocktails of juice. They will be producing 2,500 bottles per hour,” the governor added.

He stated that the governor mandated his agency to revive it for the socio-economic benefits of the state, explaining that the revival of the factory will afford the state many benefits, including prevention of post-harvest losses and wastage of fruits produced in the state.
He also said that the revival of the fruit company will help improve the economy of the indigenous farmers in the state and create jobs for the youths.

While speaking, the Managing Director, AGVEST Limited, Mr. Olabode George, said the company intends to add value to the economy of the state and turn the state to a hub of fruit juice in the country.
“Our focus is on Oyo State because we live here. Coming to the Pacesetter Fruit Processing Company that is being handed to us today, our intention is to produce fruit juice for mango, pineapple, orange and fruit cocktail. Because of the abundance of fruits in this locality, we also intend to produce jams that will make it easier.

“We will generate waste from all the production we are going to be doing. We intend to produce organic fertilizers from the waste that will be generated. And we will push this fertilizer to market.

“In all, we will be able to add 50-75 direct jobs and put 500-550 indirect jobs out. By the time the governor comes here for formal commissioning, we expect that we will have done a lot of work on the physical structure of the property. We will be importing a fruit juice lime from India, which is coming in here.
“We believe we will add value to not only the host community but also to the economy of the state in terms of what we do. We also believe we should give back to the host community where we work,” he said.

In their separate remarks, the caretaker chairman of Surulere South Local Council Development Area, Hon. Gbadamosi Morufu and the Oloko of Okoland, Oba Solomon Olagoke, appreciated the governor for reviving the moribund factory, which they noted will contribute immensely to the economic development of Okoland and the entire Oyo State at large.