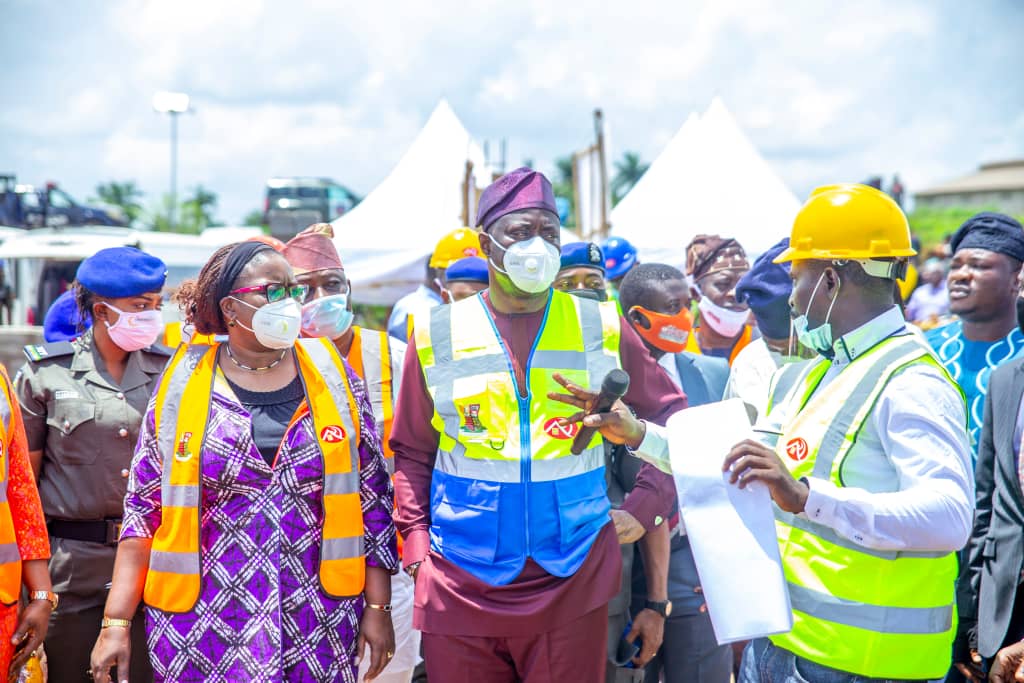 The estate, which is estimated to cost about Two Billion, Five Hundred Million Naira (N2.5 billion), according to the governor, will enhance affordable housing to all and sundry in the state.
A statement by the Chief Press Secretary to Governor Makinde, Mr. Taiwo Adisa, quoted the governor as saying that the strategic location of the new estate will ensure that the investors make quick returns on their investments.

In another development, Governor Makinde, also, on Wednesday, handed over the Agbowo Shopping Complex, Ibadan, to investors who have committed to turning around the fortunes of the abandoned complex in 104 weeks.
The complex, which is located opposite the Main Gate of University of Ibadan, was commissioned in 1984 but abandoned 12 years ago.

The statement indicated that Makinde, while speaking at the flag-off ceremony held at the Ajoda Housing Estate, New Ife Road, Ibadan, declared the determination of his administration to bridge the gap in the housing sector in Oyo State.

He said that the New Ajoda Housing Project is jointly sponsored by the Oyo State Government and Remax Realtors Limited, saying that, while the state provided thirteen (13) hectares of land for the scheme, the developer is expected to solely finance the project.

This was just as the governor said that the project will be replicated in other parts of the state so that many residents of the state can benefit from such projects.

He added that investors have begun to repose confidence in the state and are willing to do business in Oyo State because of the way the government is now being run by the present administration.
He said: “We are here today to flag off a project, which is in fulfilment of one of my campaign promises. Those who have taken time to study our Roadmap for Accelerated Development in Oyo State, 2019-2023, would have come across our promise to facilitate private sector-driven housing delivery through variants of public-private partnership (PPP) initiatives.
“And so today, we are flagging off the construction of three hundred and sixty (360) housing units here in Egbeda Local Government Area, Ibadan Zone.
“As I said earlier, this is a PPP initiative. We are working with Remax Realtors Limited. To make this project a reality, the Oyo State Government through the Oyo State Housing Corporation is providing thirteen (13) hectares of land for the scheme, while the developer will solely finance the entire project.
“The project will cost N2.5 Billion, and upon completion, the developers will recoup their finances when the houses are sold. We have seen the wisdom of getting contractors or developers to commit to projects by using their own monies to carry them out.
“Some people may wonder why we are starting off in the Ibadan Zone? Well, the need for an affordable housing scheme in Oyo State is clearly evident. Statistics show that the population of the capital city has been growing at over 2 per cent since 2018 with a peak of over 2.5 per cent in 2020. So, half of the population of Oyo State live in Ibadan Zone.

“But that the project is starting in Ibadan Zone does not mean that it will end here. Our plan is to replicate these housing units in other parts of Oyo State in the shortest possible time.”
He also charged members of the public who are interested in buying landed properties in Oyo State to patronize Oyo State Housing Corporation, adding that his administration will continue to operate an open-door policy.

Similarly, while speaking at the flag-off of the renovation and remodelling of Agbowo Shopping Complex, Governor Makinde stated that the state will work in collaboration with Messrs Whitestone Global Ltd to convert the moribund facility into a premium commercial real estate and a 4-star hotel.
He said the collaboration will be in the form of a long lease concession for 50 years, with a capital injection of N4.9Billion, saying: “Our administration understands that the only business that the government should have in business is to create a conducive environment and the needed support for private enterprises to thrive. And this is what we are doing.

“You will readily agree that the injection of N4.9 Billion into the Oyo State economy is an economic stimulus in the short term which will translate to broader benefits in the long run.
“The process of selecting the concessionaires was also transparent. As everyone knows, the days of getting contracts from the government solely because a person knows the governor is in the past. I make bold to say that the PPP mechanism of the state has been re-engineered for effectiveness.”
The governor assured that shop owners in the complex would have the right of first refusal when the complex is finally remodeled.

He also promised to put up a revolving fund scheme to assist those who may not have the money to pay for the shops by the time the project is completed.
In his remarks at the two events, the chairman of the Oyo State Housing Corporation, Barr. Bayo Lawal, said the experience of the corporation in the past has not been palatable, stating, however, that the pains are gradually being addressed by Governor Makinde.

He also appealed to those desirous of owning lands in the state to approach the corporation for reliable landed property.
Also speaking, the Managing Director, Remax realtors Limited, Adefunke Adesoji, said it was an honour to work with the Oyo State governor on the project, which was conceived as a public-private partnership.
In their separate remarks, the Commissioner for Lands and Housing, Barrister Abiodun Abdulraheem and his counterpart in the Ministry of Justice, Prof. Oyelowo Oyewo, enjoined investors and residents of the state to key into the projects, which they described as a landmark initiative.
Also speaking at the handing over of Agbowo Shopping Complex, the Managing Director of Whitestone Global Ltd., Mr. Woleola Oluwole, said: “Today is indeed a great day and another landmark in the trending capacity of Oyo State. This is not surprising because we have a governor that is an honour to follow; we have a governor who is a father to watch. Here we are today marking another trend for others to follow.
“In this place today, as it is, in the next few months, we will know, indeed, that the God of heaven has smiled upon us and the rest of Oyo State.
“This facility, when completed, will have a time level car park that will double as a drive-in Cinema in the evening; a 10-floor first class hotel; 600 capacity 3D Cinema in the evening, an underground gaming arcade; what I call the 22nd-Century E-shopping Mall. All of these will be inside 25,000 square metres.”