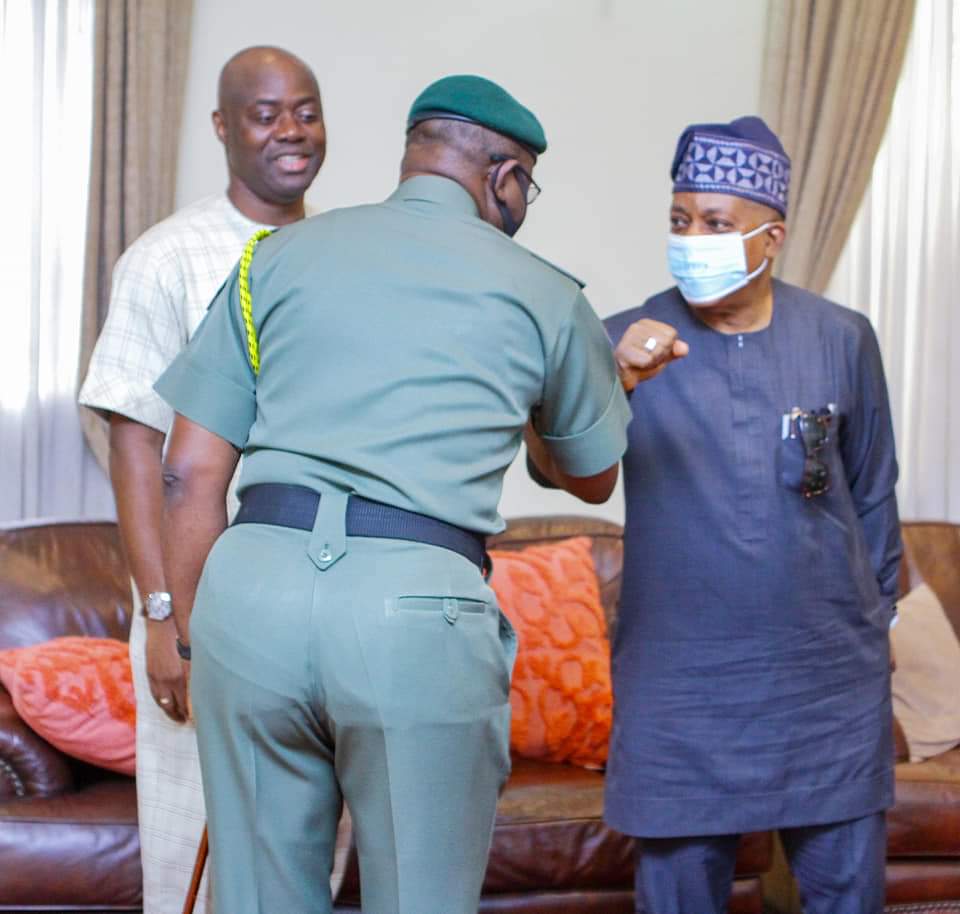 Makinde Breaks Silence After Mother’s Death, Says She Was An Epitome Of Love, Humility

Governor of Oyo State, Engineer Seyi Makinde, on Friday, described his late mother, Chief (Mrs.) Abigail Omojolagbe Makinde, as an epitome of love and humility, despite being a disciplinarian.

The governor stated this while receiving the National Working Committee (NWC) of the Peoples Democratic Party (PDP) led by the National Chairman, Prince Uche Sencondus, on a condolence visit to his house at Ikolaba GRA, Ibadan, on Friday.

A statement by the Chief Press Secretary to Governor Makinde, Mr. Taiwo Adisa, indicated that the governor expressed gratitude to the PDP NWC, noting that the fact that the leadership of the party made it to Ibadan barely 24 hours after Mama’s demise showed the love they have for him.

Similarly, the Oyo State Judiciary led by the Chief Justice of the state, Justice Muntar Abimbola, and the General Officer Commanding, 2 Div, Nigerian Army, Ibadan, Major General Anthony Omozoje, were also at the Makinde residence to condole with the governor.

“I want to say, on behalf of myself, my wife, immediate family, and extended family, we are very grateful and appreciative of this visit. This happened yesterday morning and you are here this morning. It shows that you truly love me. So, I want to say thank you.

“Actually, we were preparing for my mummy’s 81st birthday, which would have been on the November 7, exactly three weeks from yesterday. But who are we to question God?
“We are grateful to God for the life she lived. To us, she was an epitome of love, humility. She was tough.

“If you see that trait in some of us, it came from her. And we also thank God that it was not like we were carrying her from one hospital to the other. She died peacefully in her sleep. So, we thank God for what He has done.”

Governor Makinde, who also took the opportunity to appreciate the PDP NWC for the confidence it had in him to lead the Ondo State governorship campaign, said what the outcome of the election meant was that the party would have to go back to the drawing board, adding that the campaign council will submit a report as soon as practicable.

“I will also like to use this opportunity to thank the National Working Committee of our great party for the opportunity you gave to us to lead the campaign in Ondo State. We can’t question God for the outcome of that election.

“What it means is that we have to go back to the drawing board. We will be submitting a report of those areas where we fell short, to the NWC as soon as practicable.

“I really want to use this opportunity to thank all of you who were there in Akure for the love of our party and for the support that you gave to our candidate in Ondo State.
“Once again, my Chairman, I am appreciative of this visit and I thank you and all the members of the NWC of our party.”

Earlier, the PDP national chairman said that the visit was to condole with the governor and the family for the loss of their mother.
He said: “A time like this is the time you know those who care and those who are with you. Unfortunately, we have two situations on our hands. We lost the chairman of the party in Zamfara.

“Obviously, we divided ourselves; the Deputy National Chairman of the party left for Zamfara yesterday morning for the burial of our late chairman of the party. And I and the rest of us in the National Working Committee leadership decided yesterday to come to Ibadan today.
“We are here by the grace of God to console you and the rest of the members of your family. We have no other way to do it than to join you in prayers.

“It is a very painful experience that you have to go through, sometimes alone. I know what it is because I have experienced it. It is only God that can fill the vacuum in your heart because the care of a mother is quite different from that of a father.
“So, on behalf of the leadership of our party, we are here to console you on this condolence visit.

“The Lord will strengthen you. And because you are one of our best and doing good works for the people of Oyo State and at this time that you are giving out your best, suddenly, God who gives has taken your beloved mother.

“We are here to share the pain and sorrow with you and to let you know we will continue in prayers during this period, even as we prepare for the funeral. After the funeral, we will continue to pray for you, your immediate and larger family. It is important for us to do so, having worked with you and having seen you as a man who is compassionate and cares for others.

“Today, we are here with you and we pray that God will energise you at this period and stretch His right hand of righteousness to touch every one of the members of the family to bear this great loss.

“Therefore, as members of the National Working Committee, we pray that God will keep you now and thereafter to make you continue to do the good work for the people of Oyo State.”

While fielding questions from newsmen, the national chairman said the PDP is in support of the ongoing #EndSARS protests, adding that total reform of the police has become very important.

Just In:Makinde Breaks Silence After Mother’s Death, Says She Was An Epitome Of Love, Humility