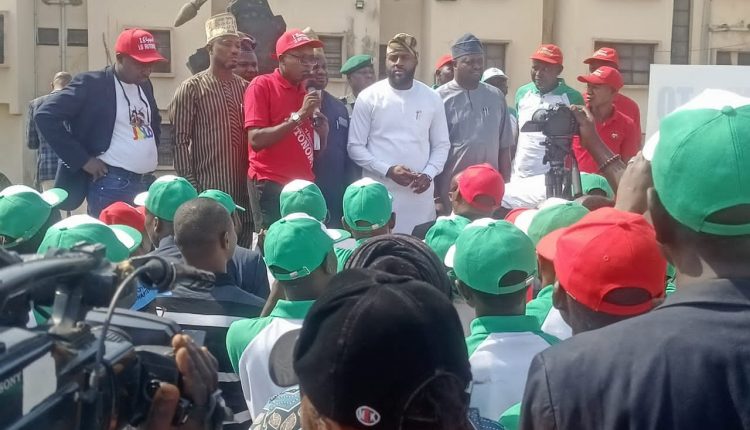 NULGE members displaying placards with different inscriptions yesterday during the rally in Ibadan.
Oyo state chapter of the National Union of Local Government Employees (NULGE) yesterday mobilized its members from across the entire 33 local government areas as they match through parts of the city of Ibadan to press home their demands.

The demands of the local government employees as contained in their chatter of demands presented to the Speaker, Rt Honourable Adebo Ogundoyin, include financial, administrative, and political autonomy which according to the union will create unhindered access to local government funds to develop the grassroots.

The rally which was geared towards the actualization of local government autonomy began from Ibadan North local government as takeoff point enroute Agodi-Total Garden, UCH road to the state House of Assembly, Agodi Secretariat, Ibadan.

The Oyo state president of NULGE, Comrade Ayobami Adeogun while addressing his members shortly before the rally took off noted that Oyo state being the pacesetter’ could neither sit on the fence nor stay behind on such an important national action as the ongoing constitution amendment process.

Berating Nigerian governors for what was described as usurpation of power, Comrade Adeogun maintained that Nigerian constitution guarantees the existence of three tiers of government and local government being one of the tiers should not be made an appendage of the state under the guise of any joint allocation account.

He noted that while it has been confirmed that 16 of the 36 states of the federation have voted in support of the 1999 constitution amendment and have transmitted same to the national assembly, Oyo state house of assembly as required by law was yet to vote and make its position known.

“We believe that Oyo state being the pacesetter’ state should be part this history of being among states that have voted to support the bill for an amendment of the 1999 constitution of the federal republic of Nigeria.

“The lawmakers must support this vision if they want to want to be on the side of history as honourable members. The confidence we reposed in the lawmakers must be justified at this point. They must remember they came to us to solicit for our votes to give them the mandate they’re running with.” Comrade Adeogun said.

The Speaker, Oyo State House of Assembly, Rt Honourable Adebo Ogundoyin, who received the agitating NULGE members at the parliamentary complex alongside other lawmakers including the Chairman, House Committee on local government and chieftaincy matters, Honourable Akintunde Olajide, said the legislature was not sitting on the fence on making its position known on the bill for the alteration of the Nigerian constitution.

Ogundoyin while absolving governor Seyi Makinde for being the determinant factor on how the lawmakers would vote said the Governor was fully in support of local government autonomy and had nothing to do with the ongoing process stressing that the Oyo assembly assembly was only concerned about the intricacies and eventual consequence of the autonomy.

While clarifying the difference between Financial and Administrative autonomy for local government councils, the Speaker said, the forum of Speakers and the Nigerian Governors Forum were consistently interfacing on the subject with the view to arriving at the best decision for the nation.

He added that one of the conditions the Governors Forum has given the national assembly to support the constitution amendment was for the creation of state police so that security matters should be taken out of the exclusive legislative list for governors to have power and control over state security.

Ogundoyin maintained while financial autonomy was more feasible, administrative autonomy may not be something that can be achieved easily as being demanded saying such will take away the powers to carry out oversight function on the local government councils from the state assembly and further complicate the situation the nation was finding solution to because it would then mean that the national assembly being the nation’s legislative arm would hence, have the power to carry out oversight function on local governments that are domiciled in each state of the federation.

The Speaker assured that the Oyo state assembly would soon invite all stakeholders to a public hearing after which a position shall be taken and made known to the world promising that the position would meet the demands NULGE yearns for as well as the state at large while urging the agitators to liaise more with the house through the office of the Majority Leader, Honourable Sanjo Adedoyin.