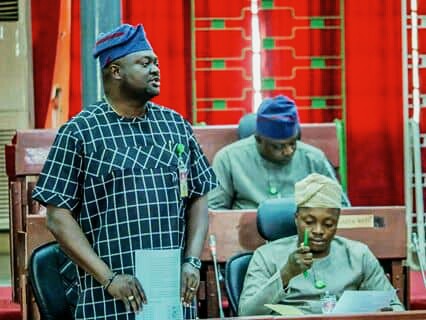 The Oyo state house of assembly has been very engaged with several legislative and oversight functions since the inception of the 9th assembly however, the allegations from some quarters that the sacked ALGON chairmen had more than the desire to serve the people at heart by the recent turn of event across the state with regards to local government matters seems to be the focal point of discuss in the last few days.

One of the lawmakers who is determined to put the records straight is Hon. Olajide Akintunde (a.k.a AKT) representing Lagelu state constituency at the Oyo state house of assembly.

The lawmaker who also doubles as chairman house committee on commerce and cooperatives, express his displeasure at the discovery in the local government financial books.

AKT as he is fondly called stated that as a member of the adhoc committee on local government and chieftaincy matters, he was greatly disturbed as monumental fraudulent activities running into millions of naira in Lagelu alone were unearthed in the course of investigating local government financial records.

He cited a particular case where a road project was reported to have been constructed at Aba Oje which is at ward 10 unit 7 of Lagelu local government area with the sum of N4.8m (four million eight hundred thousand naira only) adding that same project appeared at several other places with same titles and costs in the local government books noting that no road is in existence till present at the said location.

He expressed his disappointment at what he described as sheer greed of opportunists emanating from abuse of office by the last administration stressing that the said Aba oje is still an untilted and virgin land in Lagelu local government area, wondering how the last administration could have carried on with such act towards the tail end of its tenure.

“Aba oje is like a remote village which population and total voters registration do not exceed nine persons, so this claim of project execution at that Aba oje is a big lie” he said.

Hon. Akintunde however stressed the need to look deeper into the books of the local governments across the state from 2018 to 2019 noting that the desire to serve the people could not have been a requisite to embark on self help that puts the same people they clamour to serve in jeopardy amidst internal rancor.

He alleged that another sets of N8.4m were reportedly expended on fumigation of the local government for about eight consecutive months.

He cited another instance that was discovered in the books of Irepo local government area where a non existing elephant project was allegedly tagged erosion and flood control with the sum of N1.78m adding that the same project at same location during the second month gulped N3.68m.

He insisted that the last administration must be called to account as the document prepared was merely a copy and paste document hoping it was going to be business as usual under the present government.

The lawmaker who was visibly angered as a result of his disappointment urged the house to do the needful on the local government matter regardless of political party allegiance or affiliations noting that posterity may not be kind with them if they fail to perform the duties they were elected to perform.