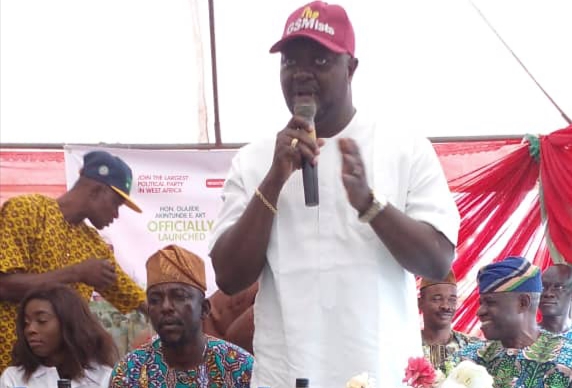 This, according to the lawmaker and the state coordinator of Oyo state PDP e-registration, Miss Abidemi Oresanwo in their separate remarks was part of the party’s preparation in readiness for the 2023 general elections.

The lawmaker, Honourable Akintunde, who is the PDP Whip of the 9th Assembly comprising of all 26 lawmakers on the platform of the People’s Democratic Party charged party members to key into the ‘Operation Save Nigeria’ campaign which started in Abuja, venue of the recently concluded national convention of the party.

Honourable Akintunde who spoke in both Yoruba and English Languages while addressing party stakeholders at the flag off event expressed satisfaction at the turn out while appreciating non-politicians who also attended the event with a view to becoming bonafide members of the ruling party in the state.

HE noted that the first phase of the ‘operation save Nigeria’s mission is to register as a bonafide PDP member while the second phase is for the people to register and collect their PVCs stressing that the mission to rescue Nigeria from the ruling party in Nigeria is a collective struggle everyone is expected to fully key into.

He also described the state Governor, Seyi Makinde as the pathfinder of PDP especially in Oyo saying that other state chapters of the party are already taking a cue from the Governor’s leadership style and how he has been able to make politics more attractive and less of bitterness with undue rivalry noting that youths and women are no longer in the back seats, both politically and in government under Seyi Makinde.

“This moment is very historical because this is the official flag off of sour great party’s e-registration which makes you a rightful member of PDP in Nigeria and secondly, we are also commencing the campaign for mass mobilization for PVC registration of party and members of the society.

“It is indeed an honour for me as a lawmaker on the platform of PDP that the Oyo state e-registrattion has officially flagged off in my local government. We can not wait to hit the road with our drive because 2023 is just around the corner already and we don’t want to give any room for complacency.

“We must start very early to prove our readiness and commitment to the ultimate mission which is to take over power from the ruling party in Nigeria. Oyo state is firmly and safely under a trusted hand therefore, our mission in Oyo state is simply continuity for consolidation on the gains of our collective struggle.” Honourable Akintunde said.

Speaking earlier, the Oyo state Coordinator of PDP e-registrattion exercise, Miss Abidemi Oresanwo in her brief remark said the registration exercise is a national assignment and the only licence to for anyone to lay claim to being a PDP member in the state is by proper registration on the party’s official online platform.

Oresanwo who expressed her appreciation to Governor Makinde for the opportunity to serve the party in her present capacity added that privileges, rights, and benefits within the party are distributed on account of membership urging stakeholders at the event to take the registration campaign down to every home at their various wards.

The State Publicity Secretary of Oyo PDP, Akeem Olatunji, accompanied by members of GSM/PDP Defenders, a sociopolitical group in the state chapter of the party said the party’s e-registrattion flag off was a clear message to all members that the leadership of the party at all levels are taking very seriously the issue of party membership.

He stressed that there is no more room for sitting on the fence or inactive membership. He noted that the e-registration exercise will permanently remove the controversies associated with a party members belonging to more one than ward or local government.

Olatunji emphasized on the need to follow up the party membership registration with mass mobilization for PVC registration in order to be eligible to vote at any given general elections, while appealing to party leaders and elders across various wards and local government areas to assist in the registration exercise.

“The good people of Oyo state are enjoying good governance under our leader and father, the Executive Governor, and we know that those liars and false propagandists are lurking around the corner to confuse anyone unsuspecting of their deceits and desperation for power by all means.

“The people have also witnessed and are still witnessing the worst government ever in the history of Nigeria under the ruling party in Nigeria. The only mission we in PDP as the largest political party in Africa is embarking on is to save Nigeria from total collapse in the hands of this directionless government and to begin we have just flagged off our party’s e-registration exercise which is followed by mass mobile for PVC registration and collection.” Olatunji said.