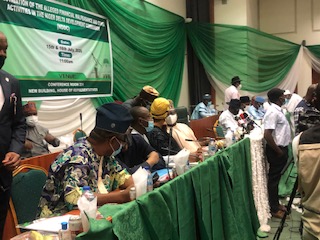 The chairman of the House of Representatives committee on the Niger Delta Development Commission (NDDC), Olubunmi Tunji-Ojo, has stepped aside as head of the panel investigating alleged financial recklessness in the NDDC.

He stated this on Monday during the continued hearing in the National Assembly.

The NDDC acting managing director, Daniel Pondei, had on Thursday led a walkout on the committee.

Mr Pondei, who appeared with other management staff of the commission, accused Mr Tunji-Ojo of corruption. He said because of that, his team will not speak before the committee.

The lawmakers later passed a vote of confidence on the committee chairman while they asked Mr Pondei and the Niger Delta minister to appear before the committee today, Monday.

Both men appeared before the committee and were still there at the time of this report.

In his remark, while stepping down, on Monday, Mr Tunji-Ojo said though he had the support of his colleagues, he preferred to step aside in order to give all parties a fair hearing.