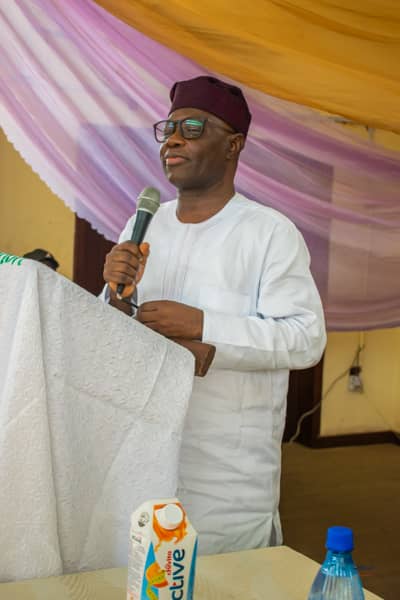 The Senator representing Oyo South Senatorial District in the 9th National Assembly, Dr. Mohammed Kola Balogun has said that his service to the people of his constituency is also service to God.

He emphasized his determination to make great impacts and surpass previous records of Senators in his district.

Senator Balogun made the disclosure while delivering a speech as the Chairman of the 40th anniversary and general meeting of the Ibadan Descendants’ Union (IDU) held at the North Campus Hall of the Polytechnic on Saturday, 05/12/2020.

According to a statement by the special assistant on Media to Senator Balogun, the lawmaker recounted his legislative inputs, oversight functions and personal efforts at making maximum impacts in his district.

The Senator gave examples of how he facilitated the inclusion of dedicated power lines in the 2021 budget for the University of Ibadan and UCH, adding that about N700m has been disbursed as Covid-19 relief loans to his people noting that there are also electric transformers and solar powered street lights installed for some communities in the Oyo South district.

The statement reads in part: “My concern is not the next election or second term, my focus is how to make the best of this mandate you have given me and ensure I surpass records of my predecessors. I have done so much and there is time to still do more.

“We will continue to compliment the efforts of our state government at the national Assembly, just like I did with the motion for the upgrade of Ibadan Airport to International standard.

Senator Balogun however, congratulated the new executives of the Union and pray for the success of their tenure and promised to continue working with the organization and other relevant stakeholders in the district with a view to ensure that the people of Oyo south senatorial district continue to maximally enjoy dividends of democracy in the state.

JUST IN: ‘My Mum Had A Way With Me’ Her Passing Has Proved Life Is Temporal – Seyi Makinde

My New Work, ‘Sorosoke’ Is My Own Way Of Communicating With Our Youths – Asimiu Ajebori, C-Fancy Creator