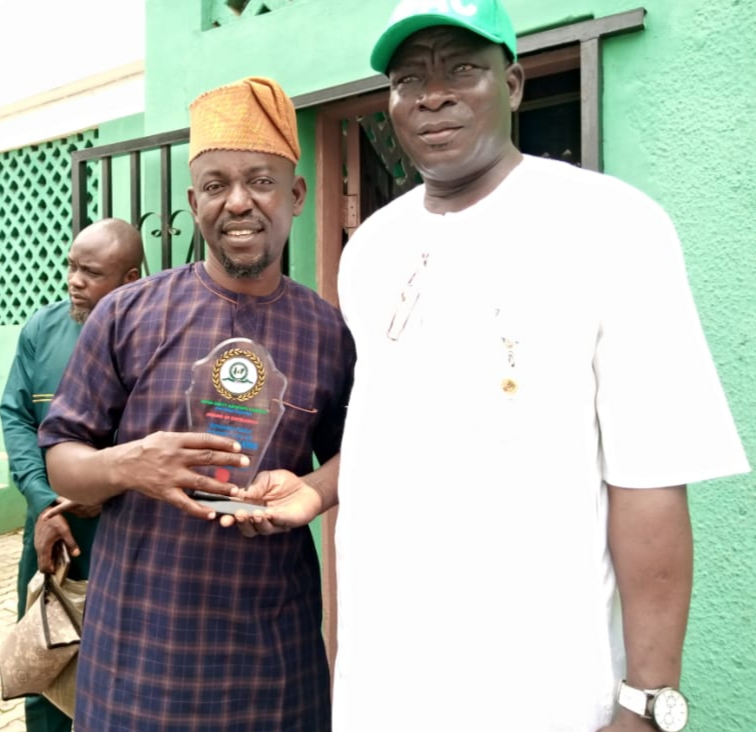 In recognition of what has been described as outstanding contributions, performance, and selfless service to humanity, Inter-Party Advisory Council (IPAC) Oyo State chapter, has presented an Award of Excellence to the Oyo State Peoples Democratic Party’s (PDP) Spokesperson, Engr. Akeem Olatunji.

The award presentation which held at the Molete PDP state Secretariat in Ibadan on Friday July 30 was witnessed by the party state Chairman, Alhaji Kunmi Mustapha, State Secretary, Alhaji Wasiu Adeleke, other members of the state working committee of PDP, state PDP Coordinator for the party’s E-registration, Miss Bidemi Oresanwo, and other top party members.

IPAC is an independent advisory council comprising representatives of all registered political parties in Nigeria with state branches registered across all 36 states of the federation.

The Oyo state Chairman of IPAC, Otunba Fagbemi Adegbenro while presenting the award to Olatunji noted that he has distinguished himself among all the image makers of political parties in Nigeria describing him as ‘second to none’.

Otunba Adegbenro who was at the event in company of the Council’s Secretary, Akinade Opeyemi, also noted that it is very important to celebrate people while alive and healthy for their contributions to humanity stressing that such gesture is a proponent that always propel people to always want to do more.

“This award is in recognition of the outstanding performance, contribution, performance and selfless service to humanity,” the Oyo IPAC Chairman stated.

He noted that the resilience and commitment of Akeem Olatunji in projecting the party in the state to the rest of the world was very commendable and should be celebrated as such would inspire others from other political parties to rise to the demands of the Spokesperson’s office.

In his reaction, Akeem Olatunji, while speaking with journalists expressed his appreciation to IPAC for the recognition saying that the gesture was an indication that people are watching activities of all political parties in the state regardless of the side of the divide of either ruling or opposition.

Olatunji said that the award will motivate him to be rededicate himself to the service of humanity and be more committed to continue to project PDP as the real and true political party in Nigeria with genuine internal democratic mechanisms to drive Oyo state to it’s promised land.

The Oyo State PDP Publicity Secretary explained that it is a difficult task to sell a failed or failing party under any leader that is disconnected from reality stressing that the success story of the Governor Seyi Makinde led government made his job as the party Spokesman easy.

Olatunji, who specially thanked the ‘GSM Defenders’, a group of volunteers committed to the defense of Seyi Makinde-led Government, and Oyo state PDP media team, maintained that it was the maximum support he enjoys from all the party stakeholders that birthed the award.

He therefore, dedicate the award to Governor Seyi Makinde for his selfless leadership that has produced physical results across the state such that has made Oyo state PDP what he described as the ‘darling’ of the masses.

He also dedicated the award to every member of the Oyo state PDP family for their continued support for Governor Makinde, calling on party members to rededicated themselves to the course of the party as preparation for 2023 general election draws close.