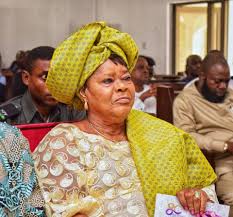 Osi Olubadan of Ibadanland and former Governor of Oyo State High Chief Rashidi Adewolu Ladoja, has sent his condolences to Governor Oluseyi Abiodun Makinde and his family on the death of their mother, Madam Abigail Makinde, describing the passage as ‘shocking’.

Ladoja’s Media Assistant, Alhaji Bashir Lanre Latinwo, quoted Senator Ladoja as describing the deceased as not only loving, but a character worthy of emulation.

The former Governor said that late Mama Abigail’s death was surprising because she was not looking weak and sick, noting that “since nobody can query God the Creator, we had no option than to accept His verdict.”

He therefore, urged Governor Makinde and other members of the family to take solace in the fact that Mama had lived a fulfilled life.

The Ibadan High Chief prayed that God gives the family fortitude to bear the irreparable loss.