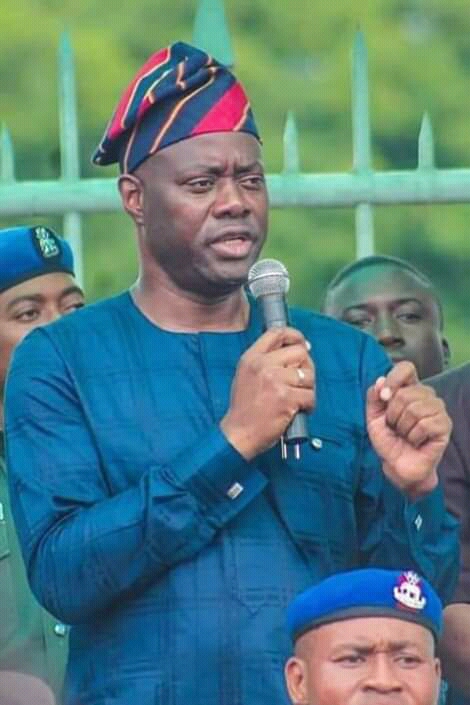 JUST IN: I Won’t Mind Breaking Some Toes To Serve Oyo People — Makinde

Oyo State Governor, Engineer Seyi Makinde has declared that he would not mind breaking some toes if it would aid his determination to serve the ordinary people of Oyo State.

Governor Makinde, who made the declaration while speaking at the thanksgiving service to mark his 52nd birthday said that he would continue to fight on the side of the ordinary people.

A statement signed by the Chief Press Secretary, Mr. Taiwo Adisa, indicated that the Governor, who clocked 52 on Christmas Day, made the declaration during his Birthday Thanksgiving Service held at the St Peter’s Cathedral, Aremo, Ibadan.
According to Governor Makinde, his determination to render service to the ordinary people informed his decision to declare free and qualitative education in the state adding that education remains the surest way to lift people out of poverty.

The Governor said: “If I can be who I am today, then no child should be left behind in Oyo State. And that explains my passion for education. Once we give education to our children, the sky is their starting point.”

He stated that he never thought he would live up to 30 and that he has remained grateful to God every year he has lived beyond 30.

“I thought I would join the Army, fight for my country and possibly get killed and that may be the end of the story. So for me, every year I have lived above 30 years is like a bonus,” he said.

The Governor maintained that he was getting more mature at 52 appreciated everyone who has made an impact on his life, even as he expressed appreciation to the people of Oyo State, without whom he said he would not have been able to achieve anything in last six months of his tenure as Governor.

He said: “There is nothing really much to say; today is my birthday and I am getting mature. Quite frankly, I never thought I would live up to 30. I have a friend here and every time we were talking, we always thought that we would go into the Army, fight, get killed and that would be the end of our story.

“We actually went for recruitment into the Army but were rejected. But today, we are seeing Seyi Makinde at 52 and all I can do is to give thanks to God.

“When we were going through the electioneering period, people said the political terrain here is rough, and I could get killed. So, I looked at myself and said that I could take the risk since I am more than 30 because I had always believed that anything I have after 30 would be like a bonus to me.

“That is why without looking back, I will continue to serve the people of Oyo State, without minding whose toe I will step on. Truth is, I will break some toes if I really have to and will continue to fight for the ordinary people of this state.”

He added: “My story won’t be complete without all of you and I thank you all. Today is the first time I am celebrating my birthday like this. In the area I grew up, the first time they would bring a cake for somebody’s birthday was when the last child of my family, Iyabo, celebrated her birthday. My parents kept delivering male children until they got to the 5th one.

“I remember after the delivery of the fifth child, who happened to be a female, my mother, in the labour room, was shouting for everyone to hear that she had a female child. For her, it was special treatment.

“Some of us who stayed in the area where I grew up, we used to eat in a communal setting. So, when they brought the cake for her birthday, it was strange to us and we suddenly rushed it. My mum cried that day. That was the kind of environment where I grew up.

“So, if I can be who I am today, then no child should be left behind in Oyo State. And that explains my passion for education. Once we give education to our children, the sky is their starting point.”

The Governor, who singled out the people of the State for appreciation for the support they have continued to offer to his Government, further said: “For the people of Oyo State, I want to thank you because we would not have achieved anything without you. People have been commending us that there have been changes within six months we came into government.

“I want the people to know that it is not only Seyi Makinde that is doing these but all of us. And you know that decisions are always taken by consensus. We discuss, thrash out issues and superior arguments always win. So, in 2020, I look forward to a more robust argument, discussions, and alignments.

“This time last year, I didn’t know I will become the Governor of Oyo State but I prayed to God during my birthday and the last cross over night that if my wish to serve the people of Oyo State would be to their benefit, let it be so and God answered that prayer. So, I want to pray today again that all our wishes, in the coming year 2020, God will make them manifest.”

In his sermon, the Archbishop of Ibadan Province, Most Revd Segun Okubadejo, who spoke on the topic, “a gift for Christmas,” encouraged Christians to gift Christ the best of their thoughts, actions, and deeds.

He said: “The gift Christ is asking of us today are the gifts he has given through finished work of redemption and the gifts are not for Christ’s benefits, they are for our benefits.

“Today, I am telling you children of God here celebrating Christ’s birth, the first gift Christ wants from us is love. He has deposited that love in us and he is asking for the same love. Love to God and to our neighbours.

‘We all know what lack of love causes in the home, the society. Lack of love is disturbing us. In the political circle, lack of love continues to cause crisis. So, today, Christ is asking for the gift of love.

“The second gift he is asking is that of humility in place of pride. Pride has turned the society and a lot of people into something else.

“Today, Christ is asking for the gift of doing good deeds,” Okubadejo stated.