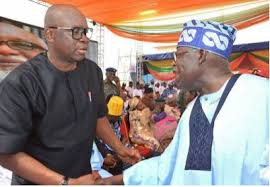 The Ekiti state branch Of the forum of young leaders of the People’s Democratic Party (PDP-YLF) on Thursday, June 18, called on the party’s National Working Committee to checkmate, as a matter of urgency and in the general interest of the party, what it described as careless comments by the immediate past Governor of the state, Mr. Ayo Fayose, aimed at disrupting the peace process initiated by the party.

The group, in a statement signed by the coordinator and Secretary, Mr. Wole Adedara and Kazim Olayiwola, respectively, claimed to be confused by the unpatriotic comments and actions of the ex-Governor, who has been a cog in the party’s promotion for some time.

We draw the attention of our respected leader and former Governor Ayo Fayose to some disparaging comments allegedly made by him to the detriment of the ongoing peace talks in Ekiti state.

The group said: “we have reliable information that Mr Fayose is sabotaging the genuine reconciliation efforts of the caretaker Committee with his inflammatory comments, so we call on the NWC to investigate and take the necessary disciplinary action as a matter of urgency and in the national interest.”

The group further stressed that ” Mr. Fayose should know that all his meetings with the national leader of the APC Asiwaju Tinubu in Lagos, especially the one that took place on Sunday, June 14, 2020, in Lagos, in their efforts to undermine the PDP in Ekiti, are not unknown to the public, adding that this is evident in all his plans and actions to undermine the peace movement of the caretaker Committee.

However, the group praised PDP leaders and members in the state for their steadfastness and commitment to returning power to the people through constructive interaction between the opposition and the ruling government led by the APC in the state, urging them to avoid any leader who is willing to manipulate the party’s fortunes for self-serving political purposes.

Fayose: APC Must Die For Nigeria To Have Peace