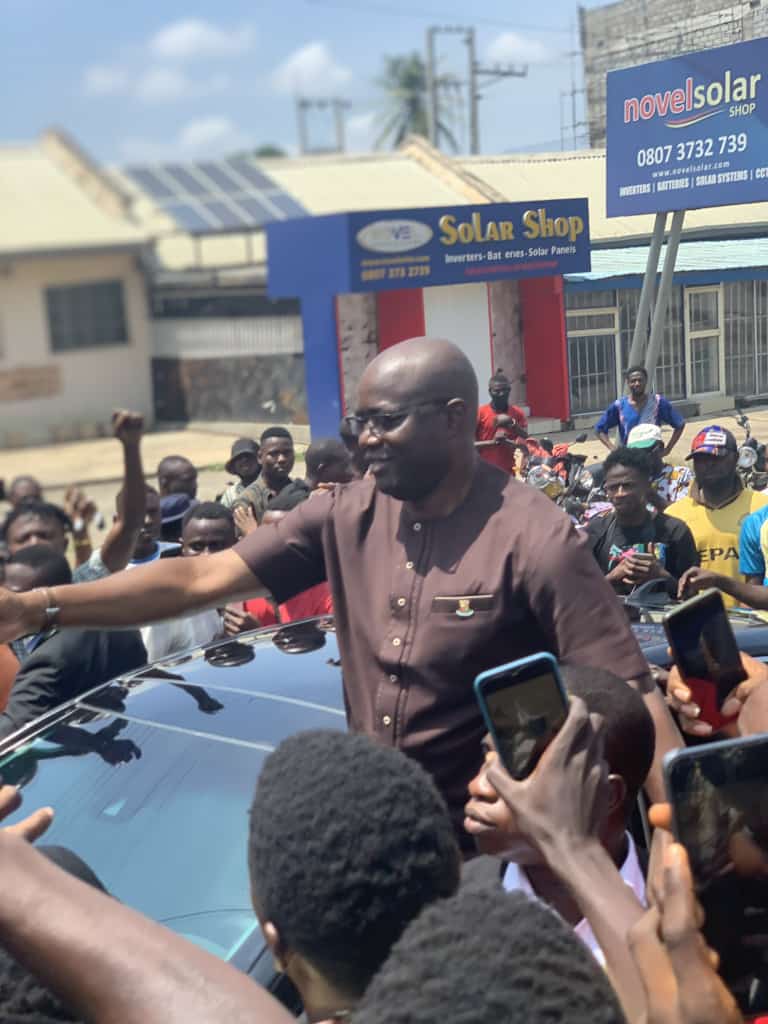 Oyo State Governor, Engr. Seyi Makinde on Saturday June 12th joined youths in the state during the peaceful protests which was to commemorate June 12 as Nigeria celebrates its National Democracy Day.

The youths in their multitude gathered themselves to demand for good governance from all levels of government especially from the government of the federation.

The protesters started marching from Mokola, Under Bridge, with presence of heavy security operatives to make sure that there was no breakdown of law and order and also guard against the protests being hijacked by hoodlums.

Governor Seyi Makinde who unexpectedly joined the protesters at the Bodija Housing Junction at the front gate of Aare Afe Babalola Building, Are Avenue in Ibadan, immediately turned the mood of the protesters to celebration owning to the fact that the Governor was unexpected as a result of his exalted office in the state.

The protesters who are majorly youths of various higher institutions of learning across Oyo state and the general public staged the protest which was conducted in a peaceful manner.

One of the protesters who spoke on condition of anonymity said, Nigeria as country has failed under the present President Muhammadu Buhari led federal government.

“We need an active President, our President is not active, we cannot continue like this, this suffering is too much, the price of all essential commodities are too high, the electricity is not working, our President recently suspended Twitter, this is injustice to our freedom of expression, we want better standard of living, this present administered has failed us.

“Fuel price is increasing and there is no justification for it, there are killings of innocent people here and there, our people cannot go to farm again and this has given rise to the price of essential food commodities in market, and with all these problem our president seems not to be bothered.

“We can’t just continue like this we need to change the present situation by changing our president who has failed to deliver all his electoral promises after almost seven years in power,” the protester laments

As at the time of filling this report the protest is going on peacefully in all parts monitored in Ibadan by Sunrisebulletin.

Despite the peaceful manner in which the protest was carried out, some residents in Ibadan noted that their compliance with the sit-at-home order by leaders of the ‘Yoruba Nation’ agitators compelled them for fear of the unknown.

They explained that the situation in the country under the present federal government has been very compelling and unbearable which has given rise to the current agitation which has increased the call in some parts of the country for secession.

Traders and commuters who usually keep Ibadan, the Oyo state capital, very busy on a normal weekend however, deserted the markets and roads such as Challenge, Bodija, Sango, Mokola, and Iwo Road for fear of violence.

However, the protesters were very excited to have the State Governor in their midsts during the protest were seen singing the governor’s praises and chanting his name. They also assured the governor that the protests will be devoid of violence.

Governor Makinde while addressing the protesters reemphasized the need for them to conduct themselves in a civil and peaceful manner to avoid breakdown of law and order.

The Governor who addressed the protesters using a megaphone maintained that the right to peaceful protest was the protesters right as provided for by the constitution of the federal republic.

He however, charged the youths on inclusive participation in the affairs of the country stressing on the power of Nigeria’s youthful population and the impact it can make in strengthening the country’s democratic process.

Oyo Governance Barometer: Why Folarin Is A Complete Liability To APC – Group