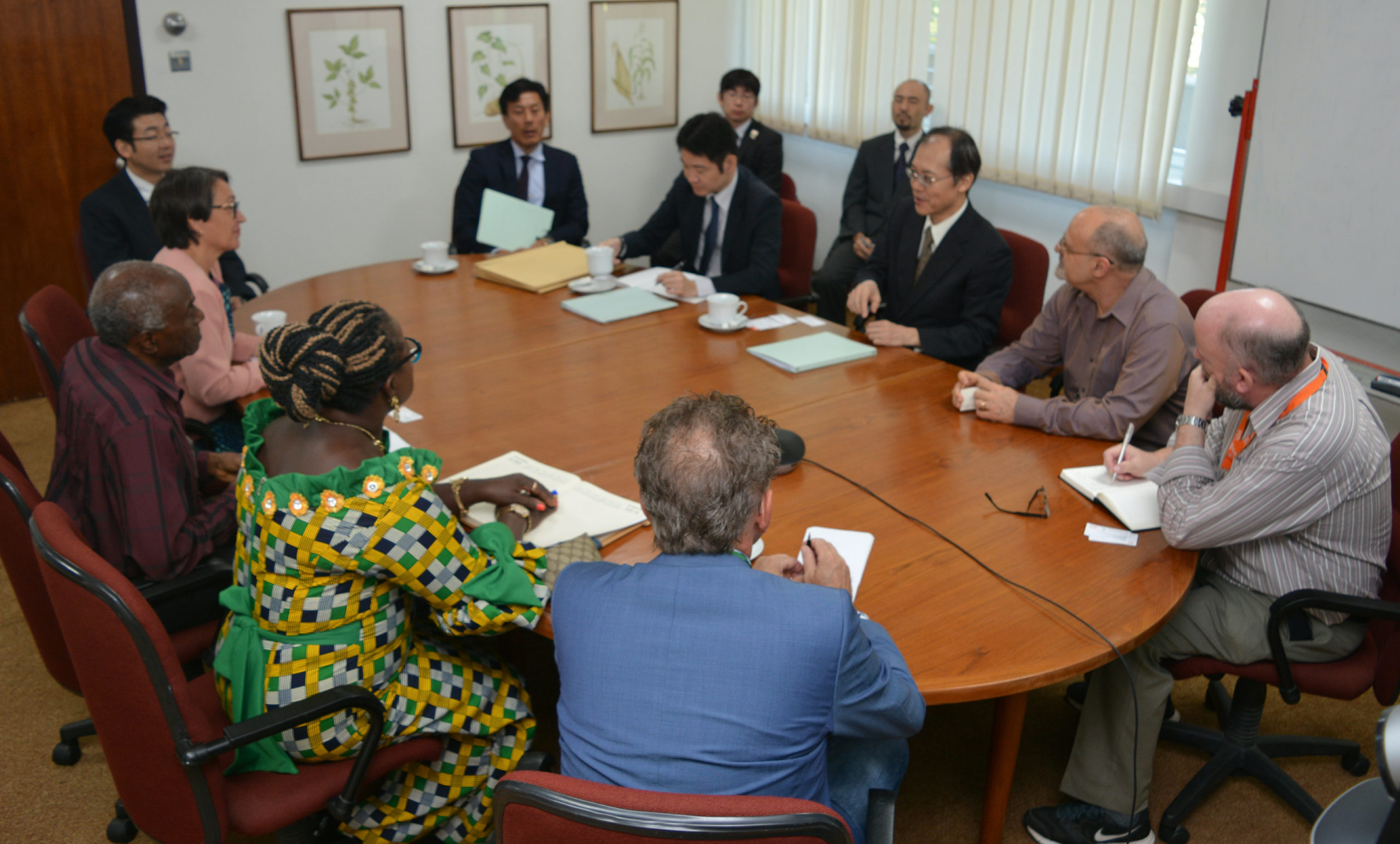 The Ambassador of Japan to Nigeria, His Excellency Yutaka Kikuta, on 17 October paid a courtesy visit to the International Institute of Tropical Agriculture (IITA)Headquarters in Ibadan, Nigeria to meet with senior IITA management.

He was accompanied by the First Secretary, Chief Security Officer Shinobu Okubo, and Head of Development Cooperation Mitsuhiro Inamura.

In welcoming the Ambassador, Saethre expressed delight at the opportunity to have an exchange of scientists from diverse locations including Japan, noting that there are at least three Japanese scientists and one visiting staff from Taiyo Industry Africa (a Japanese private company) currently in IITA as well as a Japanese member of the IITA Board of Trustees, Dr Shuichi Asanuma.

The Ambassador was visiting IITA for the first time and said he wanted to have a firsthand experience so he could personally report on the activities of the Institute. “I was quite impressed with all the people working here, including the Japanese staff. I had the opportunity to have discussions with the researchers and their story was fascinating,” said the Ambassador.

He spoke on a range of issues including women empowerment, sustainable research funding, and business collaboration between Japan and Nigeria. On gender balance, the Ambassador was happy about the increasing interest and involvement of women in the fields of science and technology including agriculture. “The Japanese Prime Minister Shinzo Abe is keen to bring about a society where women can shine. So as an embassy, we ourselves have to do a bit more to increase the female staff at my embassy as well,” he continued.

The Head of Development Cooperation, Mitsuhiro Inamura, highlighted the current downward trend of funding but noted that in spite of a reduced budget, the Japanese government has been supporting (MoFA and MAFF Japan projects) and will continue to support IITA’s work. He also spoke of increasing the current level of collaboration, not just with IITA but also between Japan and Nigeria. He said, “Right now the trade between Japan and Nigeria is limited to very small products. From Nigeria to Japan, it is one product, sesame seed, and from Japan to Nigeria it is also one product, which is mackerel. So as the embassy we will like to expand, not only the items but also the area.”

To combat the funding challenges, the Ambassador pointed out the importance of communication to let stakeholders, including tax payers and politicians, know of the actual impact of funds already spent on development research and projects. “In Japan, very few Japanese know about yam or cowpea. So we invested a lot of scientific knowledge and human resources on research on these but only a few Japanese are aware of that path,” the Ambassador added.
Saethre acknowledged the increased demand for accountability and visible impact markers from highly educated stakeholders, noting that it is a challenge that needs to be taken on. “I think also as an institute here at IITA, we really need to focus more on communicating our own research and development results generally. I think that is a big challenge for all of us right now to be able to actually convince people that we are doing a lot of good things for the funds that we are receiving,” she added.

The CEO of the IITA Business Incubation Platform (BIP), Frederick Schreurs, spoke about combating the downward funding trend by engaging in commercial collaboration where all parties would recognize and enjoy the mutual benefit in the profitable outcomes. “Mechanization is a very important factor. In Japan there are many small-scale equipment which could be applicable here. It might be expensive but if it is set up in a way that various farmers can take advantage of it then more would benefit from mechanization. The more we do, the more people might be linked to fund research projects. It’s a balance,” he concluded.

At the end of the meeting, IITA staff Haruki Ishikawa and Ryo Matsumoto conducted a field tour of the MAFF and MoFA Japan experimental fields and IITA facilities with the delegation.