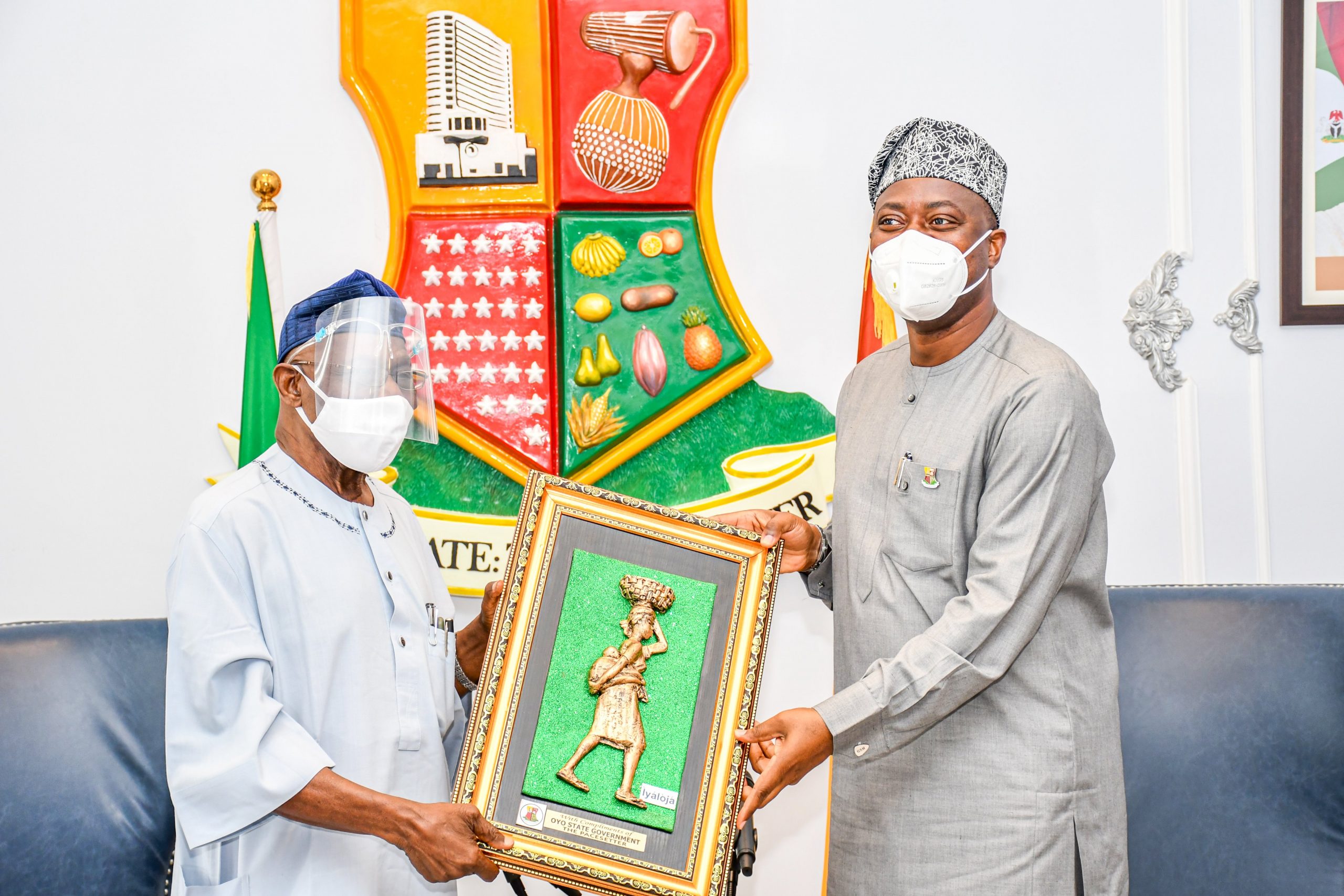 Nigeria’s former president, Chief Olusegun Obasanjo, said on Thursday that he was impressed by the developmental strides being recorded by the Seyi Makinde-led administration in Oyo State.

The former president appreciated the efforts being made by the governor to develop the state, noting that he has seen improvements in the developmental activities in parts of the state.

“I will still want to appreciate the efforts you are making in the development of Oyo State. I really want to thank you in that regard. I have seen in the area of my operation in Oyo State: in Oke-Ogun area, in Iseyin area, I’ve seen some of the improvement in the activities that are going on there,” Obasanjo said.

A statement by the Chief Press Secretary to the governor, Mr. Taiwo Adisa, indicated that the former president stated these during a visit to Governor Makinde at the Courtesy Room of the Governor’s Office, Secretariat, Agodi, Ibadan.

Chief Obasanjo stated that he was in Ibadan to, among other things, condole with Makinde on the death of his mother, Mrs. Abigail Makinde.

He commiserated with the governor, saying: “Your Excellency, let me start, once again, by bringing to you my heart-felt condolence on the demise of Mama. It does not matter how old she was, as children, we still want to keep our mothers with us for as long as possible.

“Those of us who became orphans very early, we normally feel the absence of our mothers. My prayer is that Mama’s soul will rest in perfect peace. That is the first thing I have come to perform here.”

The former president added that he was also in Ibadan to honour the memory of the late High Chief Lamidi Adedibu and to see the developments that have taken place in the Pacesetter State and how the people have been enjoying the dividends of democracy since the inception of the Makinde administration.

“Of course, I want to get acquainted with what is going on in your state in terms of development. “As you know, we are supposed to be seeing what we all own in Ibadan once in a while; to see how you are taking good care of them.

“I will want to appreciate the efforts you are making in the development of Oyo State. I really want to thank you in that regard. I have seen in the area of my operation in Oyo State: in Oke-Ogun area, in Iseyin area, some of the improvement in the activities that are going on there.”

He explained that his administration, which rests on four pillars of education, health, security and economic expansion through agriculture, has been putting-in its best efforts to achieve an all-round development of the state.

He said: “We want to welcome you to Ibadan. We have done quite a bit to follow your footsteps, because the major areas of focus for the government of Oyo State are the areas of health, education, agriculture, physical infrastructure and security. And agriculture, for us, is the only way to take Oyo State off dependence on federal allocation.

“And that is why we are fixing roads to the rural areas. That is also why we are turning some of the farm settlements into farm estates. There is one very close to your farm along Eruwa to Igbo-Ora road.

“I am sure, in another one year and a half, by God’s grace, when we are commissioning that farm estate, we will come back to you to join us to commission the farm estate.”

Th governor added that as part of his government’s desire to build infrastructure that targets the economy, it will build access to the Ikere-Gorge Dam in Iseyin so that the full value from the abandoned project could be derived.

“After I became the governor-elect, I came to Abeokuta to see you and we spoke a little bit about the Ikere-Gorge Dam. In your first coming as the Military Head of State, the dam was built. Unfortunately, from that point till now, we have not been able to realise the potential and objective of that money that was spent there.

“But the road from Iseyin to Ikere is now to be fixed under the rural access intervention programme. It is a world bank project. So, very soon, you will also see the full realisation of the value from that Dam. I make a promise to you that we will see to it,” the governor added.