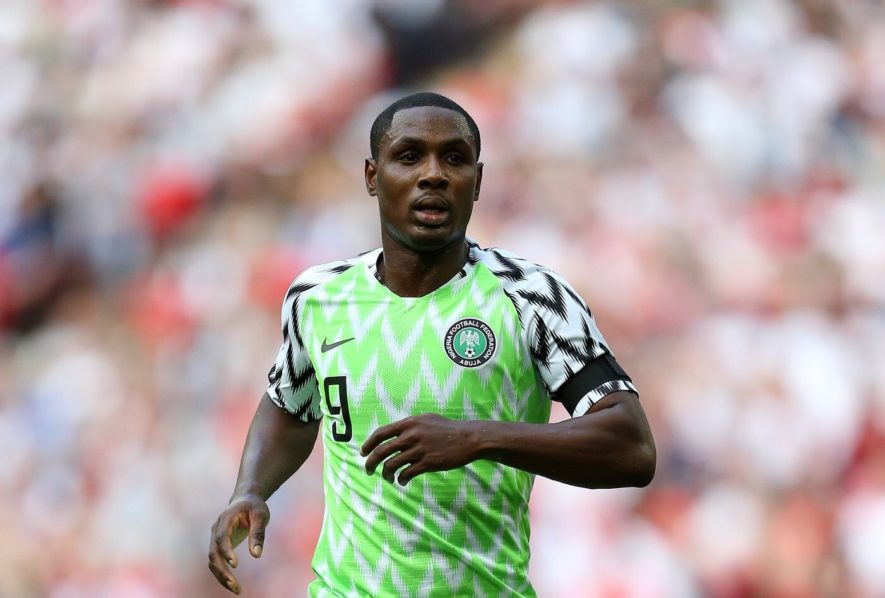 Goals from Odion Ighalo once again helped the Super Eagles to a win against Libya. Nigeria defeated the Mediterranean Knights 3-2 to move top of their Africa Cup of Nations qualifying group.

The Changchun Yatai striker scored a hat-trick in the reverse fixture played on Saturday at Akwa Ibom, Nigeria.

The striker continued on his purple patch as he notched the opener in the 14th minute following an impressive build-up.

Captain Ahmed Musa was in the thick of the action as he started the goal action and provided the assist, however the truly superlative moment of the build up was Alex Iwobi’s slide rule pass back into Musa.

Musa received a pass in the left-hand channel before he slipped the ball to Iwobi in a crowded area centrally. The Arsenal midfielder, reprising his central role behind Ighalo in attack from the first leg against Libya, threaded a perfectly weighted ball back into Musa’s path.

The impeccable pass was passively protested with the hapless hand raise by the defenders who could only watch as Musa squared the ball for Ighalo at the back post to finish.

Three minutes later, it was Ighalo turning provider for the AlNassr winger. Jamilu Collins started a counterattack from deep with a low drive into the channel for Ighalo, the striker fed the ball into Musa centrally.

Musa, crowded out, had a lot of work to do. The winger burst between two defenders, feinted his way past the third before he stumbled to squeeze a shot past the goalkeeper. It was hard work from the captain as he put the Super Eagles in an assured position or so we thought.

The superiority of the Super Eagles wasn’t in doubt as they raced into a two goals lead.

Every thing clicked into gears. The sharp and penetrative passes became routine. Interchange of play was exquisite and the Nigerian fans bawled as they were treat to high quality football. There was a swagger in every pass, spring in every step and even more motivation to hunt the ball back the few times it was lost. It was one of Nigeria’s best half hour in recent times.

Until Libya pulled one back from a header from Nourredine Zaebiaa after Leon Balogun was outjumped at the backpost by Annis Seltou. The goal seemed to change the complexion of the game as the Super Eagles’ grip on the game looked to be slipping off till they lost the handle of the game.

Half time was pined for as Libya piled on the pressure. Zaebiaa got past the thitherto excellent Collins, however his shot was parried by unconvincing Francis Uzoho.

The concerns about Uzoho became more worring as he fumbled a routine save in the final minute of the first half. The Elche goalkeeper needed a second attempt to gather an innocuous shot he could see from several yards out.

There wasn’t much respite for the Super Eagles as they returned from the break. Gernot Rohr’s men suffered a scare as Uzoho saved a 25 yard shot from Mohamed El-Munir following an important block by Aina in the box.

Ahmed Benali frittered away a chance for Libya’s equaliser when his near post shot was saved by Uzoho after he through on goal. The recovering Leon Balogun and Ola Aina made the already acute angle even more difficult for the midfielder.

However, Benali got another chance in the 73rd minute drilling home from inside the box to spark wild celebrations after Uzoho parried a shot into his path.

The celebrations didn’t last long though as Ighalo delivered the match winning moment. Ten minutes to the end of regulation time, the forward produced his trademark move, the Iggy chop, to dribble past a defender before he finished into the bottom corner with his left foot.

Following the win in Sfax, the Super Eagles are top of their Africa Cup of Nations qualifying group after South Africa were held to a draw by Seychelles