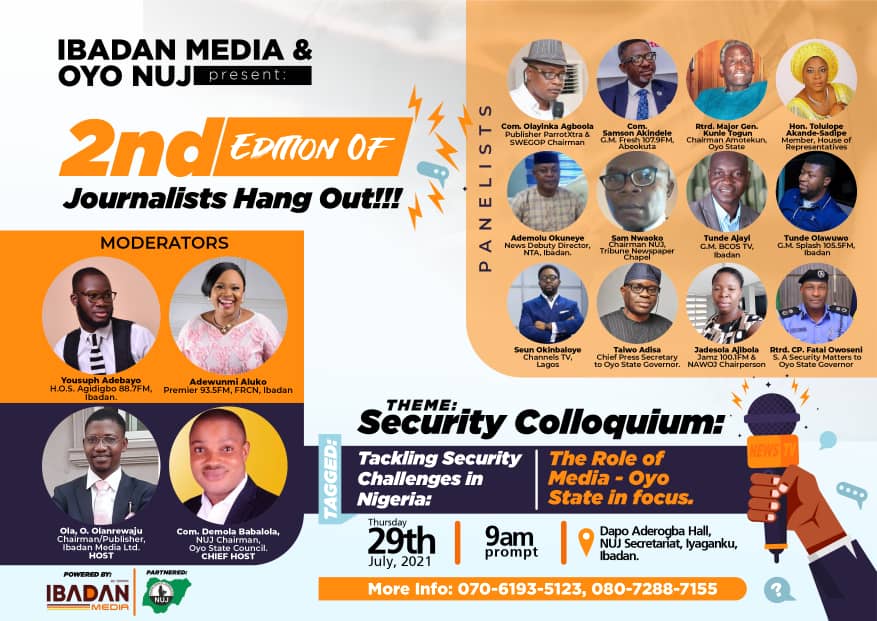 All is set for the much anticipated 2nd edition of Journalists Hang Out event, which is scheduled for Thursday, 29th of July, 2021, at the Dapo Aderogba hall, NUJ Secretariat, Iyaganku quarters, Ibadan.
Seun Okinbaloye, Tolulope Akande-Sadipe, Taiwo Adisa, Fatai Owoseni, others are expected to be on the panelists for the event, according to the convener, Olalekan Olanrewaju Ola.

Olanrewaju, the CEO/Publisher of Ibadan Media however, revealed that up to 12 panelist have confirmed their participation in the event.

“The event, which is in partnership with Nigeria Union of Journalists (NUJ), Oyo State Council, is tagged: Security Colloquium, Tackling Security Challenges in Nigeria: The role of Media – Oyo State in focus, is promised to bring people, especially media practitioners together to give them inspiration about how we can jointly tackle insecurity in Nigeria,” said the convenver.

He added that “We want to provoke discussion through the program and raise awareness, which we hope will also provide solutions to the current challenges we are facing in the country, and Oyo State in particular.”

The discussion will be moderated by: Yousuph Adebayo, Head of Station, Agidigbo 88.7FM, Ibadan alongside Adewunmi Aluko of Premier 93.5FM, FRCN, Ibadan.

Olanrewaju also revealed that, the event, which will starts by 10am will present to all participants the certificate of participation.

“We want impact of the programme to stays in people’s mind forever, the certificate of participation would be given to all the attendees free of charge.”