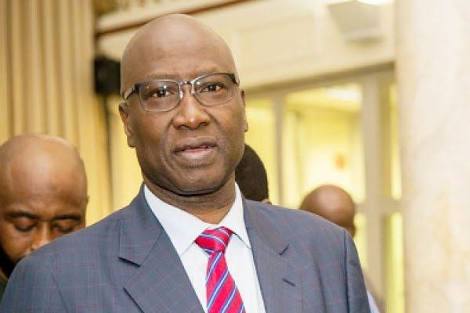 I Never Knew That our Entire Healthcare Infrastructure Is In Such A Bad State- Boss Mustapha, SGF

The Secretary to the Government of the Federation, Boss Mustapha, has decried the poor state of Nigeria’s healthcare infrastructure.

Mr Mustapha, who is also the chairman of the Presidential Taskforce (PTF) on COVID-19, said he realised how bad it was, after he was appointed to head the team. He made this known during a meeting with the leadership of the national assembly on Thursday.

“I can tell you for sure, I never knew that our entire healthcare infrastructure was in the state in which it is. Until I was appointed to do this work,” he said.

While he noted that the pandemic has provided the opportunity to examine the state of the national health care systems which is in dire need of reforms and funding, he said the weaknesses in Nigeria’s health systems became more glaring given the way more established health systems in Europe and America collapsed under pressure.

He, however, assured that there are plans to lay a legacy foundation for the immediate, medium and long-term development of the health system in the wake of the coronavirus pandemic across the country.

To this end, he said, the taskforce has proposed to utilise the resources being mobilised in a “strategic manner.” This includes:

Mr Mustapha added that for transparency and accountability, the taskforce will not be directly involved in the collection and disbursement of the cash donations for COVID-19.

“The Accountant General of the Federation has already published the account details for collection through some commercial banks and also provided the modalities for its utilisation. All the main COVID-19 accounts shall be domiciled in the Central Bank of Nigeria.

“However, all non-cash donations shall be duly received by the PTF, acknowledged, documented and appropriately deployed,” he said.

Mr Mustapha further explained that Nigeria, like the rest of the world, is at war against a dangerous enemy and all hands must be on deck to successfully prosecute the war.

To this end, he charged the national assembly to:

• Develop a legislative framework to prepare Nigeria for any future pandemic;

• Strengthen the legislative framework for economic growth through domestic manufacturing;

• Deepen the legislative oversight during this pandemic and beyond;

• Be part of community mobilization and enlightenment efforts.

While applauding the taskforce for the work done so far, the Senate President, Ahmad Lawan, advised the team to have a better coordination of the donations received from public-spirited individuals, corporate bodies and Institutions to avoid duplications or the relevant bodies working at cross purposes.

Ahmad Lawan, President of the Senate
“First of all, you are supposed to be the custodian of all the challenges that we face as far as COVID-19 is concerned. If any state has a challenge, I am sure there is a proper structure and route for reporting, so that you take down the situation and take the necessary steps.

“I believe that we face one critical challenge today in our fight against COVID-19. We have donations made by various organisations, corporate bodies and so on but it is my candid opinion that there is no coordination.

“The Corporate Nigera, as I was told as at yesterday (Wednesday), has gathered N22 billion; the Nigerian National Petroleum Corporation (NNPC), I was told had 28 million dollars; CBN and the banks, I don’t know how much they have. The National Assembly, the ministers and so many individuals and Institutions have also made donations,” he said.

NNPC Towers: P&ID and the Petroleum ministry signed the contract here
He also suggested that donations should go to just one common platform as against multiple accounts.

“I believe we must have a central body and not the PTF nor the corporate groups should receive and manage the funds but based on what the constitution provides for.

“There could be duplication, working across purposes. At the end of the day, there will certainly be inefficiency in the application of such resources. But this meeting is going to give us opportunity to discuss this and the way forward.”

The meeting, he said, is aimed at ensuring that performance is improved and service delivery is effective and efficient.

President Muhammadu Buhari had approved the distribution of stimulus package to the most vulnerable during the lockdown. He had also ordered that impounded rice be distributed across the 36 states to cushion the effect of the pandemic.

The ministry of humanitarian affairs has since announced the distribution of the first tranche of five billion naira.

The number of confirmed cases in the country has been on the increase. As of 9:30 p.m. on Thursday, the NCDC announced a total of 288 cases including seven deaths.

Historical Events That Prevented Muslims From Visiting The Holy City In The Last 1,400 Years.