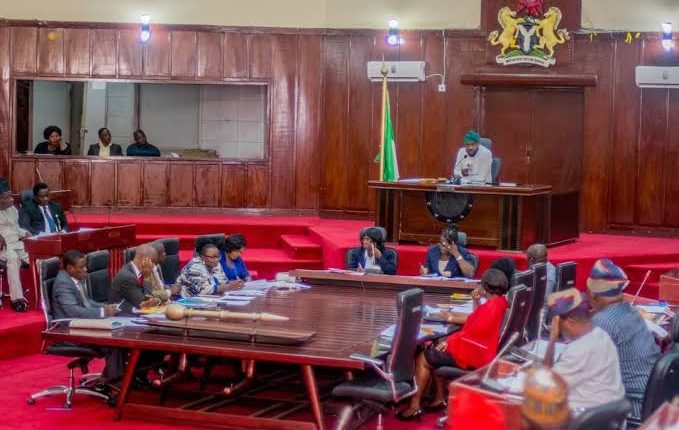 Hon. Oladeji who struggled to hold back tears while paying tribute to former governor Akala at the resumed plenary sitting on January 25 described the late former governor as her mentor and a formidable politician who devoted his life to lifting and helping others attain the peak of their potentials and aspirations.

The two term lawmaker who is also the only female lawmaker of the 9th Assembly is the Chairman, House Committee on Women Affairs and Social Inclusion. She explained that everything she has become as a politician is owed to the late Ogbomoso born political icon.

Speaking earlier during rendition of the glowing tribute at the first plenary sitting of the state house of assembly presided over by the speaker, Adebo Ogundoyin, lawmakers who were visibly sad and emotional during the plenary session eulogized the late Olubadan of Ibadanland, Oba Saliu Adetunji and the late Ashigangan of Iganganland, Oba Olawuyi Adeoye.

The House as part of its last respect held a one minute silence for the departed souls and prayed God to grant affected families and their loved ones fortitude to bear the pain of their passing.

Speaking earlier, lawmakers who recounted how late Akala rose through the ranks from Local Government Chairman to deputy governor to an executive governor maintained that since 1966 when the late premier of the western region, Samuel Ladoke Akintola died, late Alao Akala was the next biggest politician Ogbomosoland has produced.

Oladeji stressed that the good works of former governor Akala will remain indelible in the sands of time and the heart of many for generations to come.

Meanwhile, the house also received the report of alleged killing one Peter Okafor, at Mokola last year from the House Committee on Security after it has concluded its investigations on the circumstances surrounding the tragic death of the 17 year old boy.

The House however, resolved that the Committee on Security matters expedite action on ensuring that the remains of Peter Okafor who is still being kept at the mortuary pending conclusion of investigation since the tragic death of the boy last year be released to the family for his final burial.

Parts of the resolution reached by the House include among others compensation and empowerment for the mother and family of the victim since later Peter Okafor until his death was said to be the breadwinner of the family.

In his brief remark shortly before the House adjourned its plenary session, the Speaker, Adebo Ogundoyin urged lawmakers to double their efforts in discharging their legislative duties in order to achieve more results in year 2022.