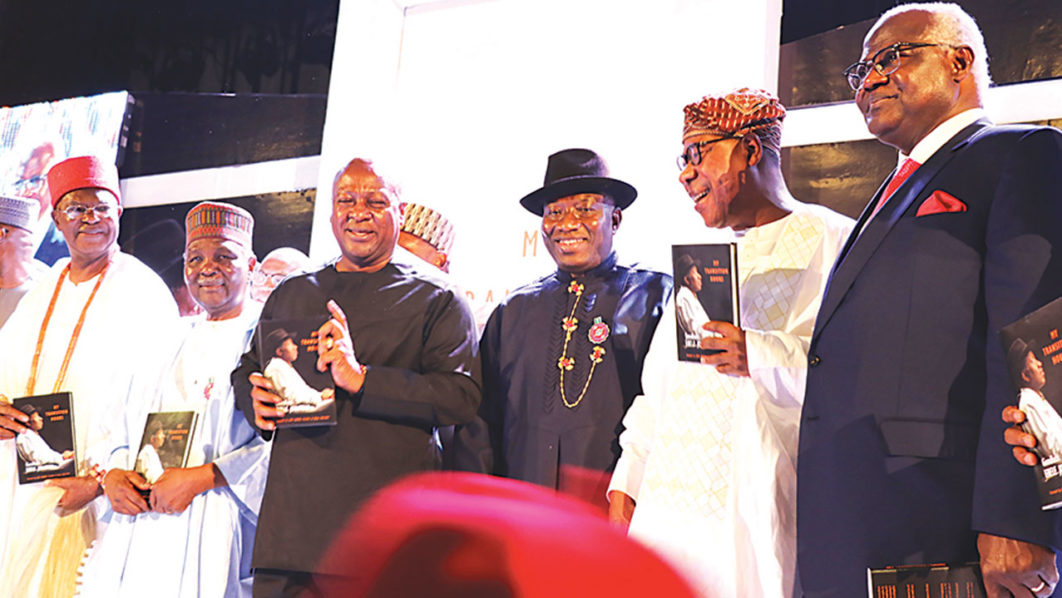 Former President Goodluck Jonathan was the subject of a flurry of encomiums in Abuja yesterday. The event was the launch of his book, My Transition Hours.

The presence of serving and former leaders including former President Olusegun Obasanjo, who was chairman of the occasion, and former Heads of State like General Yakubu Gowon and General Abdulsalami Abubakar, added charm to the five-hour occasion.

President Muhammadu Buhari, who was represented by Secretary to the Government of the Federation (SGF) Boss Mustapha, heaped prayers and praises on his predecessor, noting that his best days are yet ahead. He saluted Jonathan’s statesmanship and courage at conceding defeat even while collation was ongoing. “I thank you for being a true democrat,” he said.

Buhari said Jonathan’s action had made him a patriotic leader and earned him popularity before world and African leaders. According to him, “You (Jonathan) are a leader of the past, of now and of the future; you will rise again. I wish you the best you wish yourself.”

Jonathan, in a brief thank-you remark, said the book has words of advice on how best to fight corruption and vote buying. “The question of vote buying is becoming scandalous. We should be careful with inducement of voters,” he stated.

Obasanjo welcomed Jonathan to the camp of authors and congratulated the celebrant for enjoying a peaceful retirement. He charged Jonathan and other former leaders to discharge their “residual responsibility by continuing to serve the people.”

He said: “There is still no substitute to democracy when all is said and done because it unifies.” He warned: “But if democracy gets to the hands of hooligans in politics, it can be abused and misused.”

Before rounding off on his remarks, he tickled the audience by “acknowledging the presence of my former vice president.” Until their recent reconciliation, Obasanjo and the aforementioned, now presidential candidate of the Peoples Democratic Party (PDP) Atiku Abubakar, had been in a cold war.

In a surprise appearance, the national chairman of the ruling All Progressives Congress, Adams Oshiomhole, showed up about an hour into the programme. He embraced and shook hands with the chairman of the opposition PDP, Uche Secondus, and took pictures together.

Abdulsalami Abubakar, while appreciating Jonathan’s conduct during the 2015 election, said Nigeria is not at war today because of the latter’s decision to concede defeat. “We cannot thank you enough for the peace we are having in the country today, for the peaceful transition we had when you freely and voluntarily conceded defeat. By your decision, you have shown that you love your country more than you love power.”

Former president of Ghana, John Mahama, who wrote the foreword of the book, said Jonathan was more of an academic who found himself in politics. “He is not your typical politician,” he said. Mahama added that Jonathan approached leadership relaxedly, the reason he succeeded.

Sambo described Jonathan as a lover of merit, noting: “He picked me from among many who struggled to occupy the seat of vice president. Another example is the appointment of Prof. Attahiru Jega as chairman of the Independent National Electoral Commission (INEC).”

Saraki said: “The book is not just about your transition hours but it deals with Nigeria’s and Africa’s finest hours. We should all entrench the spirit of the book. Jonathan has set a standard that we all should embrace.”

In his birthday message, former Military President Ibrahim Babangida said Jonathan scored a momentous achievement by conceding defeat. According to him, “He demonstrated absolute leadership by example through his ability to play the game of politics by obeying the rules.”

Dogara told the celebrant: “Your excellency, we celebrate you. Those who chose not to do what you did today are not being celebrated. As a matter of fact, if they were to organise an event like this, nobody will attend. I guess the high point would be the events in Cote d’Ivoire involving Laurent Gbagbo. We all know where he is currently; where he has been confined. That is a lesson to anyone who will not want to follow this legacy of honour and dignity that you have established as a standard.

“We celebrate you today because your executive powers conferred on you the authority to take a seat among the demagogues and the narcissists of Africa. But you refused. You chose instead to take a seat at the table with all those statesmen of Africa. And today, you are celebrated. That singular gracious call you put to your opponent was what brought our democracy to maturity and conferred legitimacy to our political process. Nobody ever is going to change that. We celebrate you today because by doing that, you have brought honour to yourself and you have brought honour to all those that will identify with you.”