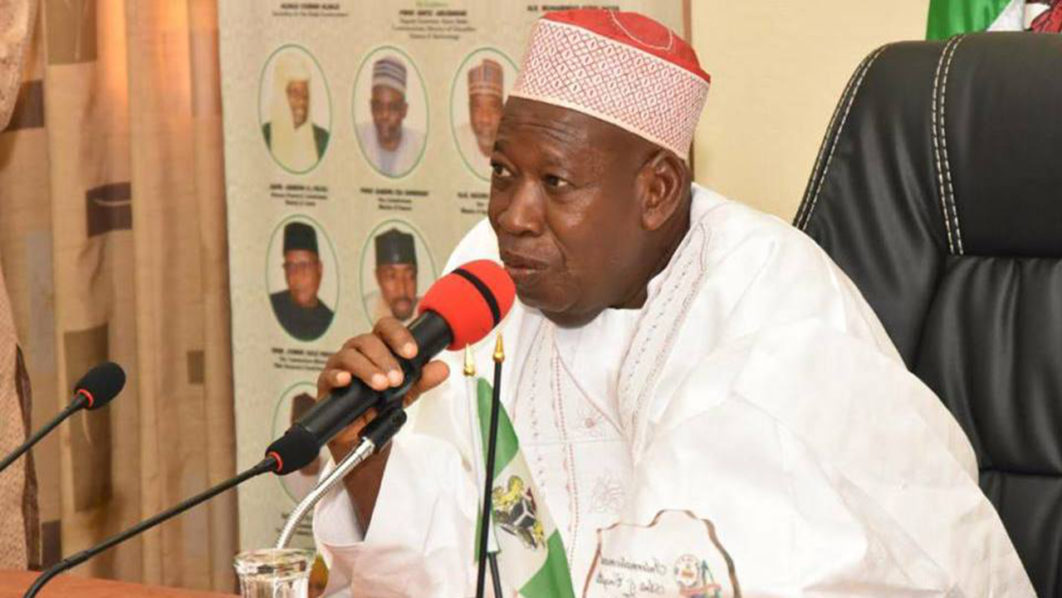 Nigerians have intensified calls for the resignation of Kano State Governor, Abdullahi Ganduje following the emergence of a fresh video where he was allegedly collecting bribe from a contractor.
The two minutes, twenty seconds footage dated January 18, 2017 and posted online yesterday, exposed the contractors, projects and voice of the purported bribe giver with the governor who was dressed in a black kaftan.

This came barely a month after two similar videos were uploaded on an online news platform where the governor was shown collecting bribes in dollars and stuffing the cash into his white babariga, but he had denied the allegation, saying the videos were photo shopped.

Consequently Nigerians are calling for Gaduje’s impeachment or resignation even as they charged the Kano State House of Assembly, Economic and Financial Crimes Commission (EFCC) and President Muhammadu Buhari to investigate the governor to serve as a deterrent to others.

Biola Kazeem said the videos showing the governor collecting bribes on different occasions may dent the All Progressive Congress (APC) crusade against corruption.

Adeyanju Deji in his twitter handle @adeyanjudeji, said President Buhari should order a quick trial and prosecution of the governor if his anti corruption fight is not a mere lip service.

Adamu Garba in his verified account @adamugarba, said, “The shameful video of Ganduje again. I used to respect him and believed that he has a genuine desire for the people.

“Unfortunately, the evidence against him is so great that the only option left is taking the path of honor and respectfully resign. I feel betrayed”

In his twitter handle @SKSolaKuti, Babasola Kuti said, “ More evidence of Ganduje’s Greed aka dollar collection operations. EFCC is in a coma till 2019 on this issue.

But the agency was quick to freeze Ayodele Fayose’s account, while he was still governor. Just imagine this was Governor Nyesom Wike, would the EFCC be this quiet on such an issue? This is why Buhari has to go”

AyoBankole, said, “Anything short of Ganduje’s resignation is a final confirmation of @MBuhari’s accomplice in the criminal dealings that happen in APC.

“To think that the man is a close ally of the President is nauseating. That the President has not condemned this shows the fraud that he is”

However, the governor yesterday commenced the Central Bank of Nigeria (CBN) agricultural business for small and medium enterprises investment scheme for 5,000 youths in Kano.

The two-day empowerment programme targeted at youths across the 44 local government areas of the state was part of CBN’s intervention scheme aimed at jobs creation and self-reliance.

The empowerment programme is being anchored by the National Directorate of Employment (NDE), just as about 4,500 petty traders received N20,000 each under the state employment initiative to improve their micro businesses.

Meanwhile, attempt to get reactions from the state government on the fresh bribery video clip against Ganduje was not successful.

Several calls and text messages send to the Commissioner for Information, Muhammad Garba, were rebuffed.

Also, Director General, Media and Publicity, Government House, Aminu Yasser did not respond to requests to provide reactions to the trending video clip.

2019: Tinubu we cant return to the illusion of PDP, speak on oshiomole’s fate