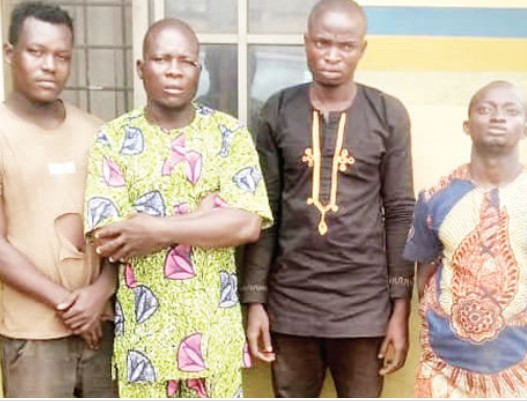 Four Held For Beating Policeman To Death In Ogun

The Ogun State Police Command on Monday said it arrested some hoodlums who allegedly beat a yet-to-be-identified police constable to death in Dalemo, Sango, in the Ado-Odo-Ota Local Government Area of the state.

The Police Public Relations Officer in the state, DSP Abimbola Oyeyemi, disclosed this in a statement on Monday.

He said the suspected hoodlums beat the policeman to a coma with weapons around 9.30pm on Sunday.

He explained that the deceased constable and one other were escorting their principal from Idah in Kogi State to Lagos State when the incident happened.

Oyeyemi said, “Preliminary investigation revealed that the deceased officer and one other escorted their principal from Idah in Kogi State to Lagos State. On their way passing through Sango Ota, a truck driver, Jelili Ismaila, drove dangerously and almost pushed their vehicle off the road.

“While trying not to hit the vehicle conveying the officers, the truck entered a pothole as a result of which its tyre got punctured.

“This made the two policemen to come down and caution the truck driver to always be mindful of other road users. But the driver accused them of being at fault, thereby mobilising hoodlums who attacked the officers and their principal with weapons and beat the deceased to a coma.

“Having realised that the policeman may not survive the attack, the driver and his hired hoodlums took to their heels. But luck ran out on four of them when the DPO and his men on a tip-off stormed their hideout and got them arrested, while four others escaped.

“The remains of the deceased officer have been deposited at the General Hospital Ota mortuary.”

The PPRO said the state Commissioner of Police, Edward Ajogun, described the incident as barbaric.

Oyeyemi added that the CP had ordered a massive manhunt for the fleeing suspects.