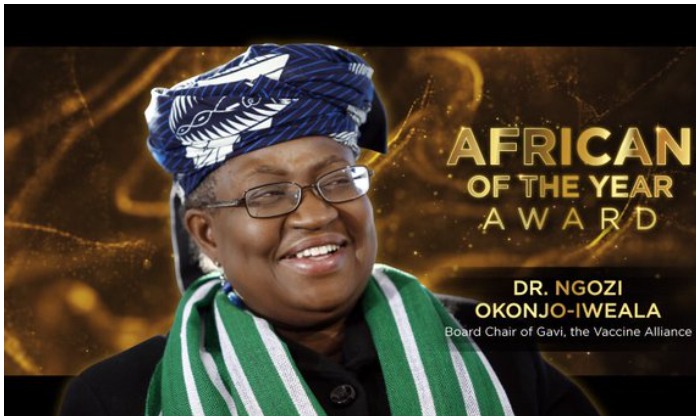 Nigeria’s former Finance Minister, Ngozi Okonjo-Iweala, has been named Forbes Africa Person of the Year 2020, The PUNCH has learnt.

“The 2020 #AfricanOftheYear Award honoree is…Congratulations to Dr. @NOlweala! Board Chair @Gavi; Board Chair @ARCapicity, gracing the cover of @forbesafrica,” the world’s leading voice for entrepreneurial success and free enterprise tweeted on Tuesday.

Reacting to the development, Okonjo-Iweala, who is set to become the first African and first woman to lead the World Trade Organisation in its 25-year history, said she is excited by the prestigious award.

She tweeted, “Thrilled to be named Forbes Africa-CNBC ‘2020 African of the Year’ following in the footsteps of my great brothers Paul Kagame and Akin Adesina.”

Nigerians who have bagged the award in the past include President of the African Development Bank, Akinwumi Adesina; Ex-Governor of the Central Bank of Nigeria, Muhammad Sanusi II; President of the Dangote Group, Aliko Dangote; amongst others.

Okonjo-Iweala, who has been the chair of Board of Global Alliance for Vaccines and Immunisation since January 2016, dedicated the award to all Africans.
This award is for fellow Africans suffering the health and economic impact of #Covid19. The energy and resilience of Africans inspire me!” she wrote.

The 66-year-old former World Bank director, who has a resumé full of qualifications and a bundle of talents, had been selected consensus candidate by the WTO Selection Committee for the role of director general.

The move was, however, opposed by the Donald Trump administration which preferred South Korean Trade Minister Yoo Myung-hee for the job.

The United States unilaterally opposed Okonjo-Iweala despite the fact that the WTO selection committee determined she “clearly carried the largest support by members” and “clearly enjoyed broad support from members from all levels of development and from all geographic regions.”

The selection committee is expected to meet this month in Switzerland to pick a choice between Okonjo-Iweala and Myung-hee.