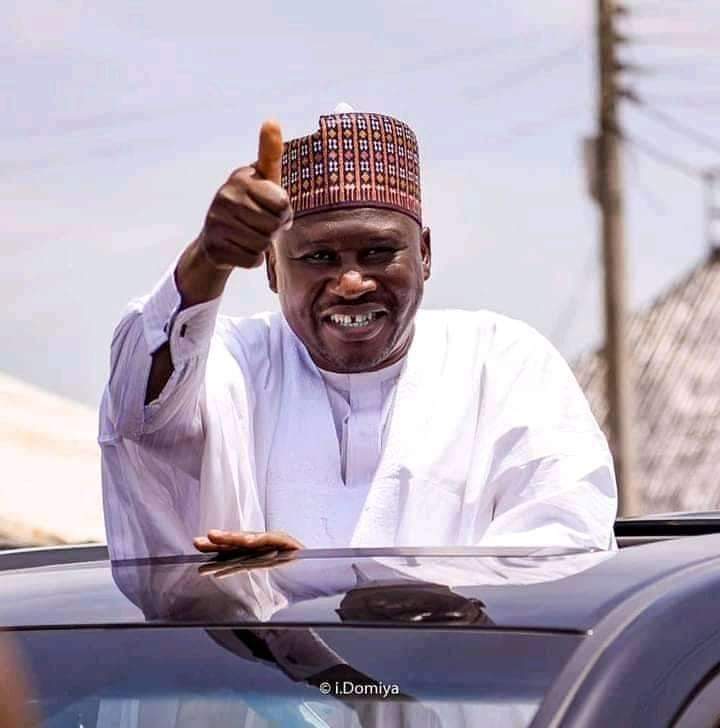 FINTIRI’S 730 DAYS OF ACTION- HOW FAR SO FAR By: George Kushi

Today ,the 29th of May 2021 marks Ahmadu Umaru Fintiri’s two years at the helm of affairs in Adamawa state. After two years of stewardship, it is only time to take stock of what happened in the past couple of years. It is interesting to note that the period is characterized by unprecedented improvement of in infrastructure. Typical of Fintiri in the two months he acted as governor the state when he kick-started beautifying the streets of the state capital and other major towns,the first flyover in the Northeast has been commissioned by Ex- Vice President, Atiku Abubakar as part of Fintiri’s eleven point agenda that made up his promise to the people of Adamawa.

As the last circle of the major projects come to an end,an appraisal of areas covered need to be brought to light.

The network of roads that span hundreds of kilometers from the north to the southern fringes of the and improved commercial and social links in the state. The beauty of the road in Numan has also increased the value property and has reduced the frequency flooding that have over the years ravaged the local communities.The same can be said of Michika,Jimeta ,Yola and other towns not to talk of roads connecting various communities.

Of great note is that the government of Ahmadu Fintiri can be said to have done incredibly well within a period of only two years. In two years,he has kept his promise to get the education sector out of its comatose state.Today,Adamawa has schools that are fed and exam fees paid for WAEC,NECCO etc and over 5000 classrooms built.Teaching materials and furniture have been provided and over sixty scholarships awarded to engineering students to India besides others in other countries.The sector is further to be invigorated by the ongoing process of adding two thousand new teachers to the present workforce to the post primary section.

In the security sector,the most troubling aspect in the Northeast,the government under Fintiri has done much by providing 60 Hi-Lux vans,10 operational vans,drones for surveilance duties and 59 motorcycles for proper policing of the state to check the menace of insurgents , robbers and armed bandits/ kidnappers.

In the same vein 30 operational vehicles have been distributed to local hunters’ associations for monitoring their areas and ensured they received tactical and intelligence training for over 200 hunters at the Police Colleges in Maiduguri and Jos which impacted on intelligence gathering and crime control in the state.

By involving religious and traditional leaders ,herder and grazers clashes has been reduced tremendously.

With the employment of 200 health-care workers and a second batch employment ofMedical Consultants,Medical Laboratory Scientist,Nurses and Pharmacist,the health sector is in good stead to adequately take care of the basic medical needs of the average rural dweller.

All over the state, new cottage hospitals are being built and several medical facilities have been and are being constructed in Numan, Guyuk, Lamurde and Shelleng .

In the field of agriculture,farm imputs were given to Farmers during the 2020 farming season by the government which approved the issuance of 100 billion bonds to farmers and the agrobusiness program in the state.
In the same vein livestock vaccines were purchased and distributed to control diseases in animals.

In the bid to build a viable economic base,the government slashed taxes for businesses to lessen the impact Covid-19 pandemic that negatively affected trade and commerce all over the world.
The memorandum for a 3 million metric tonne capacity factory in Guyuk was also signed to provide building materials and jobs.

The need to ensure that the people of the state stay healthy brought up the need for improved water supply.This about the installation of overhead water tanks,electric motor pumps,transfer pumps ,pipes and general mentainance of water plants with the plants supplying 23 millionlitres per day as against 9milliom litres per day to Jimeta and Yola towns.
Submersible water pumps have also been installed in various parts of greater Jimeta,it’s environments and across towns and villages all over the state.In the light of water challenges caused by insurgency ,295 hand pumps were installed in 7 affected local government areas.

In the same period over 40 Solar powered boreholes were built and Michika and Toungo( Toungo for the first in 25 years)got connected to the national grid.

In line with the much touted demand for local government autonomy,Ahmadu Fintiri has granted the necessary conditions for local governments operate without hindrance and furthermore released 40 million to members of the state Assembly to disburse in their constituencies.Not done with that,the government ensured adherence to the minimum wage as directed.Women ,the aged,the infirm and physically challenged have not been left out scheme of affairs in the state. It should be noted that Adamawa state implemented a policy with a specific amount to cater for the long neglected senior citizens;pensioners an issue that that previous have failed to address for several years.

The advances made by this people-oriented government led by Ahmadu Umaru Fintiri are to many to enumerate and will volumes narrate ,but one thing for sure is that no single person has impacted on Adamawa state so far more than the “Fresh Air” governor who has not reneged on his promises.

George Kushi is the Chief Press Secretary to the Deputy Governor of Adamawa State.