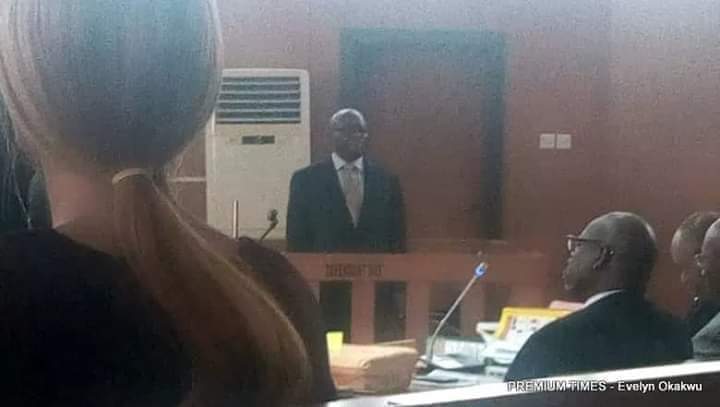 The suspended Chief Justice of Nigeria, Walter Onnoghen, has pleaded not guilty to charges of false asset declaration brought against him by the Nigerian government.

The CJN is facing six charges for the alleged offence.

Mr Onnoghen, who was brought before the tribunal on January 14, is accused of failing to declare bank accounts used for the transfer of foreign currencies aftee his appointment as CJN.

After taking his pleas, Mr Onnoghen’s lawyer, Chris Uche, asked for the bail of his client.

The request was immediately granted by the tribunal chairman, Danladi Umar, without hearing from the prosecution.

An application for an adjournment was made by the defence counsel, and was not objected by the prosecution.

Mr Onnoghen, who refused to take a seat inside the dock, was still standing at the time of filing this report.

Donning a black suit with a brown tie, Mr Onnoghen stood with his hands wrapped around his back for most parts of the proceedings.

He arrived the CCT at about 10.00 a.m. on Friday, two days after the tribunal ordered his arrest.

The justice had boycotted earlier hearings, as he contested the powers of the tribunal to hear the case of alleged asset falsification against him.

On Friday, Mr Onnoghen arrived the tribunal in the Jabi district of Abuja at about 10.00 a.m. amidst heavy security.

His convoy of Toyota Land Cruisers parked outside the tribunal hall for several minutes before Mr Onnoghen walked into the court room flanked by aides and security.