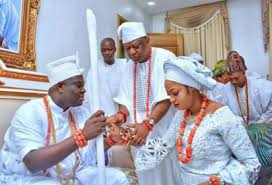 Prophetess Naomi has yet to return to Ile Oodua as the wife of Ooni of Ife, Oba Adeyeye Ogunwusi, after her divorce post on Instagram, the Palace told The PUNCH on Thursday.

This is contrary to a broadcast message on WhatsApp and Facebook stating that the monarch and his wife had reconciled.

The unconfirmed message claimed elders from both families met in Akure, Ondo State, to which she relocated.

Though sources in the palace confirmed that a reconciliation move was made, they claimed it’s gtgnot successful yet.

It was earlier reported in the news that some elders from Ile-Ife made a last-minute move to reconcile the Ooni and his estranged wife.

The prophetess had on Thursday, December 23, 2021, in a statement posted on her verified Instagram handle, announced an end to her three-year-old marriage with Ooni.

When contacted on Thursday over the message circulating on social media, one of the elders said “both parties have been persuaded to return but no feedback yet from one of them.

“The last time we heard from them, they said the family will meet and decide.”

When asked which party is yet to give feedback, the prominent Ife elder replied, “You can’t know.”

One of the aides in the palace added, “No reconciliation yet. We are in the palace. Queen Naomi is not here and her room is still locked.

“We have not been asked to prepare to welcome her.”