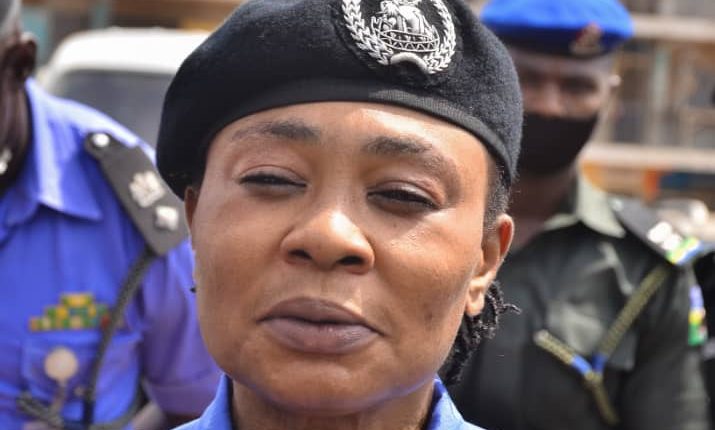 Following reports across various sections of the news about a planned commemorative protest in remembrance of the unfortunate EndSARS saga, the Oyo state Commissioner of Police, CP Ngozi Onadeko, has appealed to residents and planners of the protest to have a rethink.

The Police boss reiterated the commitment of her State command to deploy every means necessary within the purview of the law to deal decisively with whoever attempts to gather anywhere in the state to disrupt public peace and orderliness.

The Oyo State Police Public Relation Officer (PPRO), DSP Adewale Osifeso who made this disclosure on behalf of the Commissioner of Police in a signed press release made available to Sunrisebulletin.com on Tuesday October 19 described the memories the unfortunate EndSARS crisis left in the minds of the public and the Nigerian Police as ‘trail of sorrow, anguish, and painc’.

Sunrisebulletin.com recalls that The protest which derived its name from the slogan started in 2017 as a Twitter campaign using the hashtag #EndSARS to demand the disbanding of the unit by the Nigerian government witnessed a renewed outraged and expression of frustration and anger by rhe Nigerian youths who took to the streets across the country to demand an immediate end to what was described as Police brutality emanating from Killings, assaults, and harassment by SARS officials in Nigeria and lack of freedom of expression.

This news medium also recalled that on October 3rd large scale protests sparked up by a viral video allegedly showing SARS officers, a unit in the Nigerian Police now disbanded, killing a young man in the southern Delta state.
Authorities claim the video was fake and arrested the man who made it which provoked even more anger and the eventual outrage expressed via the protest which started on October 8, 2020.

The unfortunate incident of the EndSARS protest recorded a number of deaths and casualties involving both protesters and members of the Nigerian Police leaving behind memories of wanton destruction of lives and properties.

However, in a bid to forestall a recurrence of such event CP Onadeko has urged all residents in the state especially the youths behind the planned protest to have a rethink stressing that the Command would not hesitate to use any legitimate means necessary within the ambit of the law to enforce sanity and prevent needless loss of lives and wanton destruction of private and public properties including critical government infrastructures which could emanate from the proposed protests.

“The Oyo State Police Command through intelligence availed to it has unraveled clandestine plans by groups of misguided people to embark on large scale violent protests in parts of the State in commemoration of one year anniversary of the unfortunate October ENDSARS saga.

“Consequent upon this, the Commissioner of Police, Oyo State Police Command, CP Ngozi Onadeko fdc, is appealing to individual(s), groups and most importantly architects of these sinister plans, to have a rethink as the Command would not hesitate to use any legitimate means necessary within the ambit of the law to enforce sanity and prevent needless loss of lives and wanton destruction of private and public properties including critical government infrastructures which could emanate from the proposed protests.

“Recall that the October 2020 EndSARS incident left a painful trail of sorrow, anguish and pains in the minds of Nigerians inclusive security agencies.

“In furtherance to the above, the Commissioner of Police has directed extensive visibility and aggressive patrols by Area commanders and Divisional Police Officers while adequate deployment of operational, intelligence and tactical assets would be strategically positioned across every nook and cranny of the State to compliment and neutralize any threat or act(s) capable of truncating the relative calm enjoyed by the citizenry.

“Furthermore, Parents, guardians and leaders that wield various degrees of influence in religious, educational and traditional capacities are passionately advised to warn their wards and proteges against been used by merchants of anarchy as violators would be thoroughly sanctioned and prosecuted.

“Lastly, the good people of the State are advised to go about their lawful daily activities as comprehensive security measures have been emplaced to forestall breakdown of law and order.” The Oyo Police Command said.

JUST IN: You Have Our Support To Run For 2nd Term – Oyo ZLP Tells Seyi Makinde, Appeals To Aggrieved PDP Members