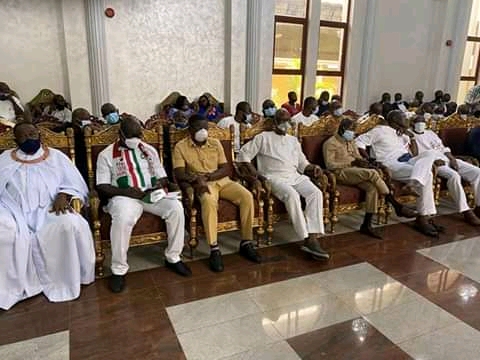 The Oba of Benin, Oba Ewuare II, has asked leaders of the Peoples Democratic Party (PDP) and the All Progressives Congress (APC) to emulate ex-President Goodluck Jonathan who congratulated President Muhammadu Buhari after losing the 2015 polls.

The monarch gave the charge on Wednesday during a meeting he had with the leading candidates ahead of the September 19 governorship election in the state.

Speaking during the meeting, the revered traditional ruler expressed his displeasure over the attitude of some politicians stressing on the need to exhibit the spirit of sportsmanship regardless of the outcome of the election.

According to the monarch, he is unhappy that the state has been in the news for the wrong reasons.

Oba Ewuare admonished the political actors to avoid heating up the polity, adding that they must put the interest of the state first.

The custodian of the Benin culture is shocked that the relationship between Oshiomhole and Obaseki, which was very close and thought to bring peace and tranquillity and progress to the state, has turned sour bringing bad image to the state.

While appealing to the political actors to sheathe their swords, the king asked them to avoid violence.

He thereafter demanded an assurance from the politicians that there will be peace before, during and after the elections.

The Oba explained that the move is necessary to ensure that Edo State will not become a laughingstock.

Stressing further, the monarch asked the politicians to stop bitter comments capable of heightening tensions, reiterating that the Benin throne remains non-partisan as it has always been from time.

After the meeting, the political leaders took turns to assure the traditional ruler that peace will reign in the state.