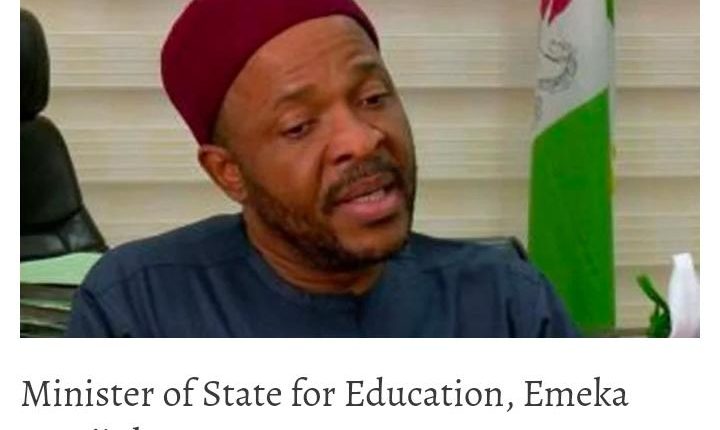 The Minister of State for Education, Emeka Nwajiuba, has said it doesn’t make sense for members of the Academic Staff Union of Universities to continue to earn salaries while on strike.

The PUNCH reports that ASUU began one month warning strike on February 14, 2022 and since then has not suspended its industrial action.

“If you refuse to even pay them, by the time they call off the strike, they will still come back to fight for the payment of the period they refused to work.

“You can air your grievances, come to the negotiation table without refusing to work. The issue of the strike has become a thing of concern. I have four children; two have graduated while the other two are still in public universities. I feel for them, I feel for other students who are at home. I feel the same way other parents feel, but can I bring money from my house and give it to ASUU?

“The Ministry of Education isn’t the employer of the lecturers, we are a supervisory body, and there is no way we can fire or hire someone. Universities have governing councils that supervise the activities that go on, our job as in the ministry is to supervise, we can’t meddle in.

“On the issue of the Integrated Payroll and Personnel Information System, I am also paid via the IPPIS, it is owned by the government, there is no way you can tell the government to throw away its platform and pay you with another platform.”

Meanwhile, the President of the Senior Staff Association of Nigerian Universities, Mohammed Ibrahim, has accused the Federal Government of focusing on frivolous things and neglecting the education sector and the youths.

Speaking during the 2022 May Day celebration in Abuja on Sunday, Ibrahim said the universities were forced to shut down due to government insincerity, adding that the standard of education had continued to go down.

He stated, “Our universities have been forced to shut down due to the insincerity of the government to keep to its promises. The standard of education continues to go down due to the insensitivity of the government and the inability to provide a good teaching, learning and work environment through lack of basic facilities that will make them compete favourably with their peers in other parts of the world.

“The morale of university workers is dampened by the poor pay package and the government appears to be paying lip service to education. It is very clear that government pays more attention to frivolous things and has neglected youths that are said to be the leaders of tomorrow.’’

The SSANU President lamented the condition of Nigerian workers whom he said were going through perilous times in form of insecurity, economic hardship and other challenges.

He noted, “This year’s Workers Day comes when Nigerian workers are passing through perilous and dangerous times. Nigerian workers and indeed members of our great union are confronted with diverse challenges like rising spate of armed banditry, kidnappings, insurgency, economic hardship and worst of all, the inability of the government to keep to agreements it entered into with all the university-based unions in 2009.

“Our members have been denied payment of new Minimum Wage Consequential Adjustment arrears and backlog of earned allowances in addition to other violations of our rights and privileges. Our universities have been forced to shut down due to the insincerity of the government to keep to its promises.”

He admonished the government to resolve the ongoing strike by university workers and also tackle the challenges facing the country.

“Toying with the future of our children will spell doom for our dear country. I call on the government to look into the demands of all the university-based unions and take urgent steps to address them so that our children will go back to school,’’ the union urged.