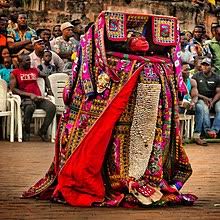 The Oyo Police Command has warned residents in Ibadan, the capital city of Oyo state against disrupting the existing public peace currently being enjoyed by residents in the course of celebrating the annual Egungun festival stressing that violators of public peace in the state will be decisively dealth with.

The Oyo State Commissioner of Police, CP Ngozi Onadeko made this known in a press statement signed by the Force Public Relation Officer, (PPRO), DSP Adewale Osifeso on Wednesday 9th of June, and made available exclusively to sunrisebulletin.com.

Sunrisebulletin gathered that a part of Oyo state in the Ibarapa axis has been faced with security challenges which has raised some level of apprehension among residents across the state.

This online news medium earlier reported that some unknown assailants in a midnight attack invaded Igangan community in Ibarapa North Local Government Area of the state on Saturday 5th of June till around 11pm till about 3am of Sunday 6th of June leaving no fewer than 11 persons gruesomely murdered.

CP Onadeko, during her on the spot assessment visit to the area had commiserated with the people and appealed for calm urging them not to resort to taking laws into their hands in the interest of public peace and orderliness.

However, reports of celebration of the annual Egungun festival which has been described by many as a global phenomenon and could be hijacked by unscrupulous elements to forment trouble.

The Oyo State Police Command has however, reiterated its resolve to deal decisively with anyone or group who may want to use the occasion of the celebration to forment trouble in the state.

“The Commissioner of Police through diligent intelligence has been intimated about plots by criminally minded persons in the State to deliberately violate one of the richest displays of trado-cultural heritage in the Continent.

“The meeting was to predominantly review past processions and to harp on actions necessary to ensure a hitch-free festivity. The event was concluded with the official signing of a peace-pact, legally binding before, during and after the festivities.

“Consequent upon this, the Commissioner of Police wishes to affirm the Command’s position of not folding its hands in docile stupefaction while the historical event evolves into a “free-for-all” avenue for bloodletting, Arson, Stealing, Rape and other vices. To this effect, the Command promises to deal decisively with anyone that breaches the relative tranquility enjoyed in the State.

“Therefore, the Commissioner of Police wishes to emphatically assure the good people of Oyo State that effective and proficient deployment has been made to ensure heightened levels of security in the State. She therefore appeals to all and sundry to go about their lawful businesses without fear of harassment or molestation.

“The NPF rescue me app is also available for free download on both Android and Apple IOS, for Android and I phone users respectively.” DSP Osifeso said.