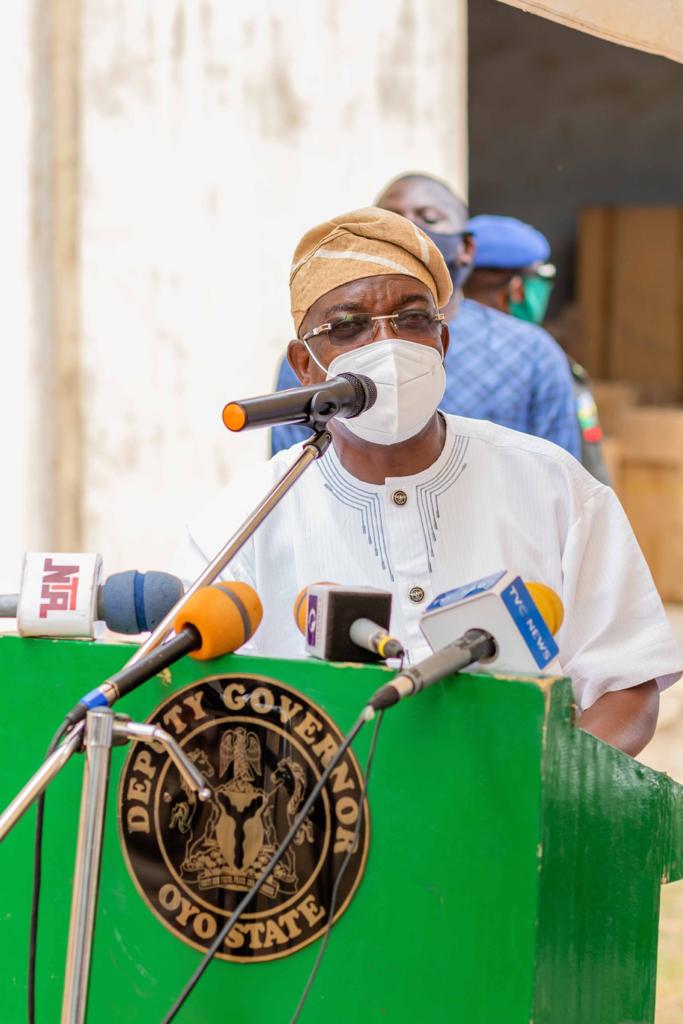 Covid-19: Oyo receives N250 million CACOVID support
Governor of Oyo State, Engineer Seyi Makinde, has declared his readiness to turn around the standard of the 100-bed isolation and treatment Centre in Saki, Oke Ogun part of the state.

A statement signed by the Chief Press Secretary to the governor, Mr. Taiwo Adisa, indicated that Governor Makinde gave this assurance while receiving support of medical equipment worth N220 million from the Coalition Against COVID-19 (CACOVID), a private sector initiative supporting Federal Government and state governments in fight against COVID-19.
The governor, who was represented by his deputy, Engr. Rauf Olaniyan, said that when completed, the treatment and isolation facility in Saki will be an improvement on the one existing in Olodo, Ibadan.

CACOVID had earlier promised the state N220 million worth of medical equipment and a cash gift of N30 million.
The private sector-driven CACOVID, the statement said, is in partnership with First Bank of Nigeria.

The governor explained that the Saki isolation centre to be completed and commissioned soon, will be for both treatment and research, adding that the facility will have provisions for observatory, isolation and treatment sections.

He appreciated the CACOVID team for the initiative and donations, assuring that all the facilities are to be deployed to the Saki isolation centre, because of the peculiarities of the axis, which shares a border with neighbouring West African countries.

He said “The Saki Isolation Centre is going to be three-in-one. It will have what you call an observatory, isolation and treatment centre.

“The reason we need to have an observatory is because Saki is a border town and many people come in from different parts of the West African states, especially Burkina Faso and Benin Republic, they come in through that area.
“So, when patients come in, what we do is to create an observatory. An observatory is not available in Olodo as I speak. So, Saki is the only one that will have an observatory, an isolation and a treatment centre.
“What that means is that the bed capacity of Saki ideally should be more than that of Olodo. Saki already has a hundred capacity bed, divided into Intensive Care Unit (10), High Dependency Unit (20), general male and female ward (70).
“But because we want to add an observatory, where patients who come in with no symptoms but have had a contact and may be worried that they may have contracted the infection. What we need to do is to bring them to the observatory, take their samples and within 48 hours get the result and decide whether they will get into isolation or go home.
“So, Saki by all standards, is going to be bigger than Olodo even though the structure is the same. But we have harnessed some areas specifically for the observatory and that will take ten extra beds.
“It will take about six weeks to put the place in shape, because the governor has approved the funding, which will be utilised. We are installing everything that will make the place fully functional as soon as we take off.”
Justifying the decision to move all the donated facilities to the Saki Isolation centre, the governor said “why we are taking all the facilities to Saki is because we want to give everybody the same sense of belonging.
“We have built the Olodo centre and we must also care for those outside of Ibadan. When test results of people come out negative, nobody wants to know which part of the state they are from but are more concerned that they are from the state.
“We don’t want to see any COVID-19 patient dying in any part of the state. So, if we now say after all we have done in Olodo and we decide to put other structures in place in other parts of the state, is there anything wrong in that?”
While appreciating the CACOVID team for the donations, a member of the Oyo State COVID-19 Task Force, Professor Temitope Alonge, in his remarks described all the equipment donated as appropriate for the treatment pattern being followed in the state in the fight against COVID-19.
Alonge said “What thrilled me is that the CACOVID team took cognisance of the disease pattern that we are managing and decided to provide equipment that are appropriate. On many occasions, people have made donations that are good on paper but in terms of usefulness, probably not as good.
“But what they have done is to provide everything from the most mundane to the expensive ventilators, which are all going to be utilised for the management of this disease.
“And to top it all, they brought us about 40 cylinders of oxygen, meaning for the next one year or thereabouts, there may not be need for the Saki Centre to run to Ibadan to come and collect oxygen.”
Speaking while making the donations, the CACOVID Team Lead in charge of Oyo and Osun states, Dr. Timothy Aroowogun, said the objective of donating the equipment is to “support the state government in eliminating COVID-19, help the citizens and also help the health workers to contain the pandemic in the state.”
Aroowogun, who also represented FBN Chief Executive Officer, Dr Adesola Adeduntan, maintained that the bank is a frontline partner in the extensive measures that the Federal Government-led public and private sector partnership have taken to treat the sick and to stop the spread of Coronavirus in the country.

JUST IN: Miyetti Allah Hints At Establishing Own Vigilante Group To Counter Amotekun