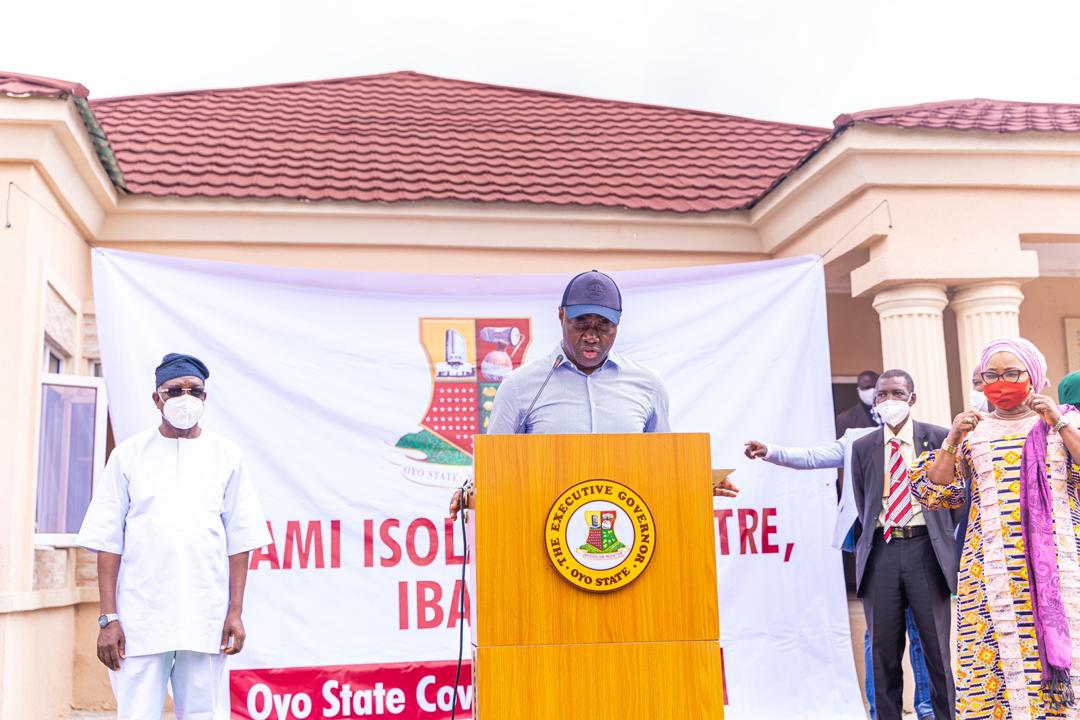 …curfew now 12 midnight to 4 am, as Aawe isolation centre reverts to PHC
The Oyo State COVID-19 Task Force, headed by Governor Seyi Makinde, has announced a review of the 10 p.m. curfew imposed on the state in the wake of the COVID-19 pandemic.
A statement by the Chief Press Secretary to Governor Makinde, Mr. Taiwo Adisa, which contained details of the report of the Task Force meeting held on August 31, 2020, and presided over by the governor, indicated that the curfew will now run from 12 midnight to 4 a.m.

The Task Force, however, specifically warned operators of Night Clubs to desist from accommodating anyone on their premises during the period of the curfew.
According to the statement, an advisory would be sent to night clubs, warning that guests should not be allowed into their enclosed areas.
The statement further indicated that the Task Force issued another warning to residents of the state to continue to follow the OWN YOUR ACTION initiative of the state’s COVID-19 Task Force, as, according to the Task Force, the state “is not completely out of the woods with regards to COVID-19.”
It explained that the decision by the Governor Makinde-led Task Force to relax the curfew was premised on the need to reduce the burden on business owners in the state, whom, it said, has been affected by the curfew, especially since the COVID-19 situation has begun to improve in the state.
According to the Task Force, though it appeared that COVID-19 cases are coming down in the state, “the confidence interval could not be determined yet.”
It warned residents of the state not to jettison the guidelines on the prevention of the virus, including washing of hands, social distancing and use of nose masks.
The statement also informed that Governor Makinde has directed the Emergency Operations Centre (EOC) of the state not to relent in data gathering and analysis in order to appropriately situate the context of the virus within the state.
The statement added that the governor has also approved the conversion of the Aawe Isolation Centre to a Level 3 Primary Health Care Centre (PHC), directing that the facility should be decontaminated and handed over to the Hospital Management Board.
Similarly, the statement confirmed that the Task Force has approved that except for the Infectious Disease Centre, Olodo, Ibadan, other isolation centres in the state could be converted to Level 3 PHC.
It, however, stated that whenever a spike in COVID-19 cases is noticed in the location where any of the facilities is situated, such a facility would be re-converted as an isolation centre or a part of it will be so utilized as an isolation centre.
The statement also indicated that the Task Force has directed the Oyo State Hospital Management Board to identify a Primary Health Care Centre around Olodo axis of Ibadan, which would be upgraded to take care of residents in that axis, as there are no designated government hospital facilities around the Iwo Road-Olodo axis.
While briefing the Task Force meeting, former Chief Medical Director of the University College Hospital and Coordinator of the Oyo State Isolation Centres, Professor Temitope Alonge, maintained that upon the decline in the number of COVID-19 patients on admission at the isolation centres, the staff strength of the healthcare workers should be reduced to a tenth of the current size.
He added that the health care workers in the Oyo State service have been adequately trained to manage the reduced cases of infection, saying that health workers from the UCH would be put on the reserved list and called upon whenever the need arises.
In its briefing at the meeting, the EOC reported that it has, in collaboration with the Information Communication Centre of the state, developed a portal for the registration of NCDC-licensed private laboratories for the conduct of COVID-19 tests.
In all, the Task Force noted, a total of 15,700 COVID-19 tests have been conducted, with 3,118 confirmed cases and 37 fatalities.
The Special Adviser to the governor on Health, Dr Funmi Salami, also hinted that there has been a spike in the cases of stroke among the elderly in the state largely due to being confined to their various homes in order to avoid COVID-19 infections.
The Task Force, therefore, approved that advisory messages on how to avoid stroke will be rolled out through designated media outlets.
The statement further said that the state is already designing an advisory guideline on voluntary compliance with COVID-19 protocols, while the Commissioner for Education, Barr. Olasunkanmi Olaleye, reiterated that concerted efforts have been made to ensure that schools complied with COVID-19 safety protocols upon resumption.
The statement concluded that so far, the state has received donations in cash, agricultural goods and health equipment to the tune of N1.273 billion since the outbreak of COVID-19 in the state, while the governor appreciated everyone who supported the state in different ways during the pandemic.
Signed:
Taiwo Adisa
Chief Press Secretary to Governor Seyi Makinde
September 3, 2020.