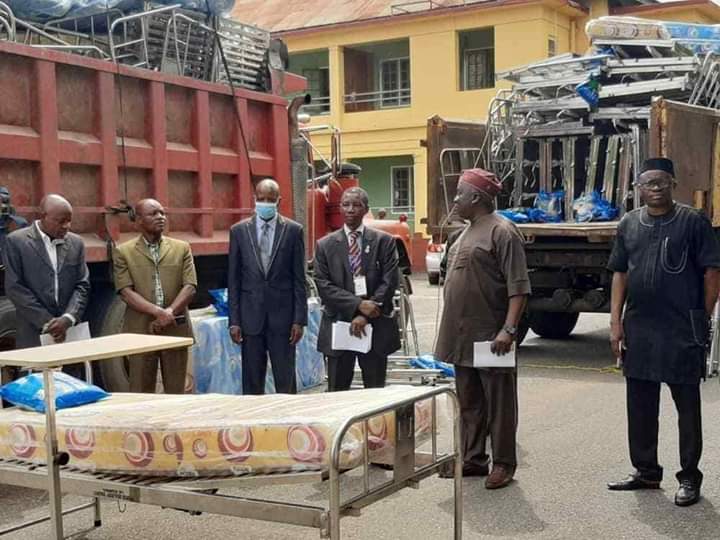 
Acting chairman of the Oyo State COVID-19 Task Force, Prof. Temitope Alonge said on Friday that efforts of the state government at curbing the spread of the virus are yielding results.
Prof. Alonge, who addressed newsmen at the newly completed Infectious Disease Centre, Olodo, Ibadan, stated that due to the efforts of the Task Force, cases of infection are not on the rise in the state.
A statement by the Chief Press Secretary to Governor Makinde, Mr. Taiwo Adisa, quoted Prof Alonge as saying that the state was flagging off the training of health workers and volunteers to man strategic sections of the Olodo Centre on Saturday.
The disclosures were made on the heels of the growing interests by well-meaning individuals and companies who have been making donations to the State in cash and kind.
Prof. Alonge, who received a delegation of Zard Holdings at the Olodo Centre appreciated the representatives of the company for making huge donations to the state in aid of its efforts to combat COVID-19.
The Group Property Manager of Zard Holdings, Prince Taiwo Oriowo, said the organisation comprising Zartech, Sweetco and Kopek construction company stopping the spread of COVID-19.

He said the items cost the organisations about N20million but that it is not too much to give back to the society.
He listed the items to include 100 hospital beds, pillows, mattresses, bedside lockers and drip stands among others, said that the company was concerned about the need to tackle coronavirus frontally in the state.
He said that the items donated were worth N20 million.
Another key contributor to Oyo State was the Central Abbattoir, Ibadan, which also donated hospital beds, mattresses and other items worth N15 million Naira.
Mr. Oladayo Oladipo, who represented the company said that the management of his firm was concerned about the scourge of coronavirus, adding that it had to present its contributions to help the state fight the spread of the virus.
Prof. Alonge, who told journalists that it was expensive to fight coronavirus, said that the state government was determined to fight the virus by making significant financial commitments to all the eight units involved.


According to him, measures put in place have started yielding fruits as the state has remained stable as new cases have not been on the rise.

He added that the list of infected people in the state stands at eight, with one person discharged and two others doing exceptionally well.
He also stated that two infected persons are awaiting re-testing before they can be declared negative publicly.
Prof Alonge also stated that the remaining five infected persons are also doing well and responding to treatment.
He reiterated the fact that the State’s Infectious Disease Centre at Olodo will be operational from Monday.

Alonge said, “Whilst we are hopeful that the measures that we are putting in place at the moment are yielding results with very few numbers of patients recorded as having been infected, and our contact tracing is ongoing.

“We still do not want to take chances and that is why we are preparing for a case scenario that may not be pleasant, meaning that we may have a lot more patients than we have at the moment.

“As at today the third day of April, 2020, we have eight cases that are positive, one has been discharged, two of the patients have done exceptionally well and hopefully we will do their test again … and the remaining five are in excellent health.

“We believe that the measures put in place by the Task Force is yielding results and with the donations to complement the efforts of the government, we are very grateful for these donations.

“And I want people to know that Governor Seyi Makinde is putting all efforts in place. Olodo is primarily a treatment centre, meaning that all the worse case scenario will be managed here, but as I speak the same efforts are put up in Ogbomoso and Saki.

“There have been loads of requests from various organisations and individuals asking that they have various locations that we can use. A solidarity group yesterday donated a whole bungalow in Felele area of the state in the event that we need to use. We also have private companies who are partnering with us.

“For instance, Oyo state has the first private intensive care unit located at Iyaganku, a five-bedded facility. A company headed by medical doctors have approached us that in the event that we have challenges, they are more than willing to leave their doors open. At whatever fees we will be more than happy to ensure that people get the best of care.

“And so these donations will go a long way not only to augment the efforts of government but also to reinforce the goodwill that is been generated.”

Speaking on the contact tracing, Alonge said:  “As at yesterday, we are tracking close to 140 people and the concept is not to track them and ask them to leave their homes. The level of contact is variable. If I am speaking to you from about three to four metres, that is not a contact because I am not sneezing into the air. That level of contact is so low that we are not going to begin to test you.

“But, if I am sleeping in the same bed with my wife and I have tested positive, that is close contact and that kind of person can be monitored and quarantined. If there is no symptoms, we wouldn’t belabour the issue.”

He assured that the materials donated will be shared among the centres across the state adding that efforts are not being concentrated in Ibadan, the State capital.

“I can assure you that this place (Olodo Infectious disease Centre) will be functional by Monday. The functionality of a system is not only in the structure but what you need to put in place first is the system. The system must flow appropriately.

“Training is going to commence tomorrow (Saturday) for the health workers who are going to work here and once I am through with the training, I have water supply, electricity, oxygen pipes installed, ICU installed and others I am functionally ready. It does not mean that the patients are going to be referred here, unless they need it. However, if patients need to be admitted, we will be more than ready to admit them.

“We have fragmented the healthcare personnel that will be working here into four categories, we expect to have maximum of 90 people, because healthcare delivery is not only for doctors, we have doctors, nurses, physiotherapists, medical Lab scientists and we are encouraging training programmes with the clinical physiologist because fear has captivated people’s attention so much so that even the health care workers are scared.

“We are aware that facility like this requires people, but those in the ministry of health are not enough for the work. They are all working across the 56 hospitals across the state and we don’t want to belabour them with extra loads and that is why we are engaging volunteers.

“As I speak, we have written to Nigeria Medical Association (NMA) Chairman, Nurses Association, Physiotherapist Association, Medical Lab Scientist Association, all in Oyo state chapter and even pharmacists and all those we know will work with us here and they have all shown interest to work as volunteers.

“We have prepared where they will stay and what they will wear and we expect that they work for a week in a stretch and some other people will relieve them so that they won’t break down.”

While speaking on the structure of the Centre, he stated that the treatment centre has three areas, the most expensive part where the very sick patients will be is called the intensive Care unit with ten beds. The step down to the intensive care is called High Dependency Unit.