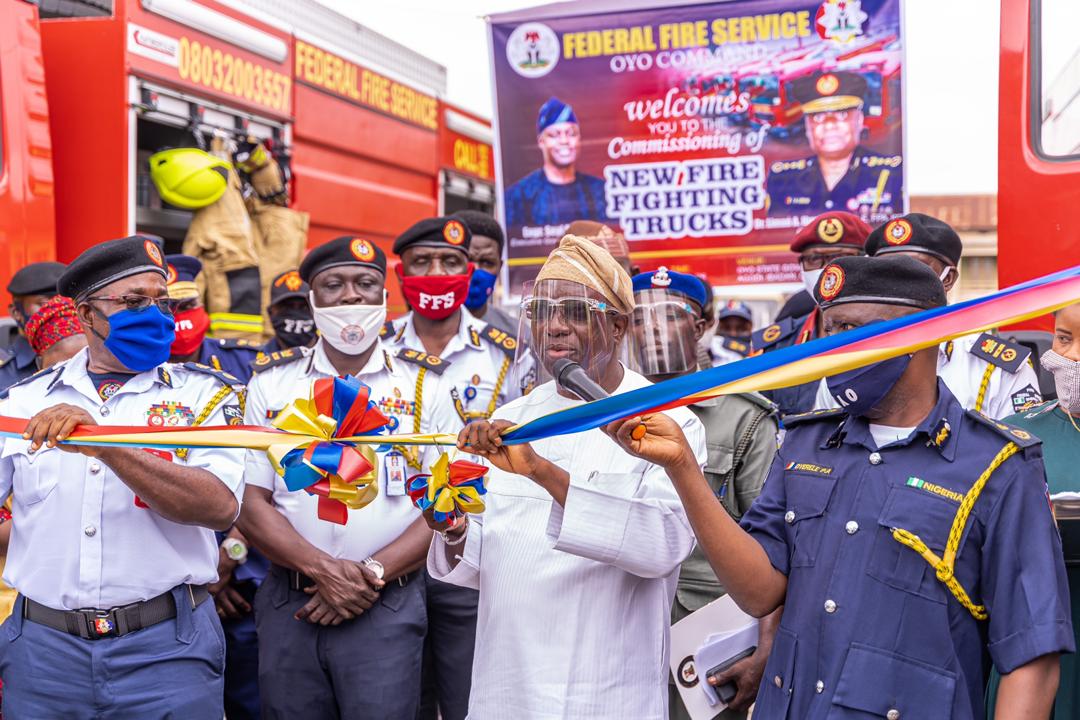 In the face of the recurring fire disasters ravaging markets and other public areas in Oyo state, the governor of Oyo State, Engineer Seyi Makinde, has urged all relevant authorities and individuals to collaborate in order to prevent fire outbreaks.
The Governor gave this charge through his Deputy Engr. Raufu Olaniyan today at the Commissioning of two brand new state of the art firefighting trucks deployed by the Federal Government for use by the federal fire service in Oyo state, The Commissioing of the trucks took place at the state Secretariat Ibadan.

The governor lamented the series of fire outbreaks which led to loss of human and material resources adding that such occurrences could be averted if individuals took more precaution to prevent this.

The state helmsman said the state has improved infrastructure and is daily growing more metropolitan, with human activity, “there is bound to be increase in fire incidents” as a result of this government is building a formidable and effective fire prevention and firefighting outfit.

Governor Makinde averred that the state is at an advanced stage to procure five state of the art firefighting trucks to complement the rehabilitated and refurbished equipment the state initially had.

He further appealed to the federal government to increase the number of firefighting trucks deployed to the state such that the state has at least one in each of the state geopolitical zones.

He appreciated the Federal Government and Minister for Interior, Ogbeni Rauf Aregbesola for collaborating with the state government in the bid to prevent fire disasters and by tension support national and economic development.

The Comptroller General of Federal Fire Service, Alhaji Lehman Ibrahim, who was represented by his Deputy, Mr Callistus Agu said the recent fire outbreaks expedited the FG’s decision to deploy the trucks to the state.

He said the FG hopes the trucks will help in combating fire disasters and the attendant destruction of infrastructures.