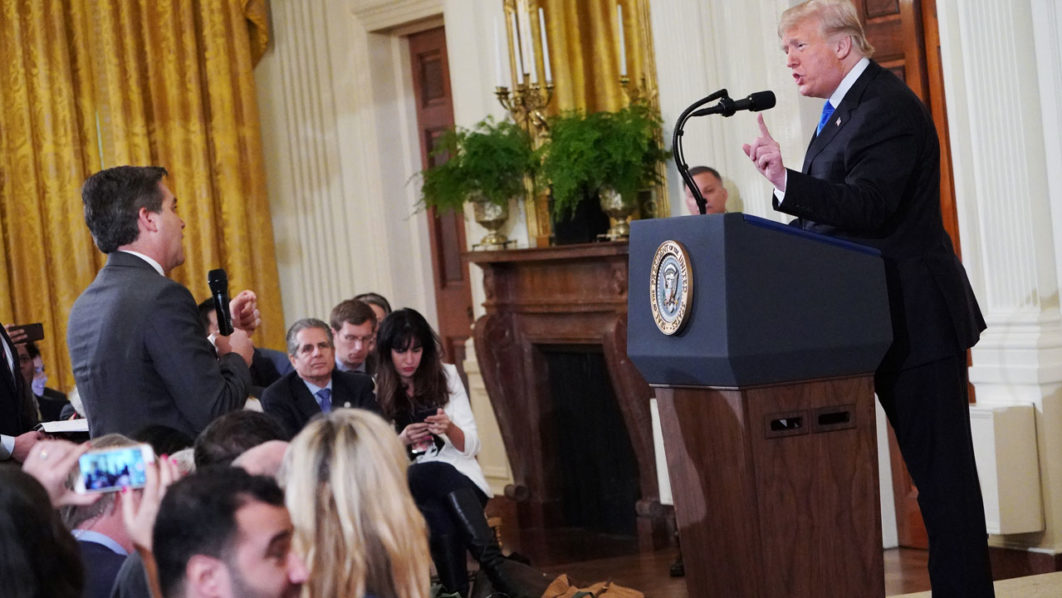 A federal judge will hold a hearing Wednesday on CNN’s lawsuit against Donald Trump’s administration alleging the White House violated correspondent Jim Acosta’s constitutional rights by revoking his press credentials following a heated exchange with the US president.

The White House dismissed CNN’s complaint as “grandstanding” and vowed to “vigorously defend” against the lawsuit.

The row on live national television and Acosta’s resulting banishment triggered a wave of accusations that Trump is stifling the free press, and marked a sharp escalation in tensions between the president and CNN, a frequent target of his ire.

“The wrongful revocation of these credentials violates CNN and Acosta’s First Amendment rights of freedom of the press, and their Fifth Amendment rights to due process,” the news network said in a statement announcing the lawsuit filed Tuesday in federal court in Washington.

CNN asked for a temporary restraining order, warning that Acosta’s credential suspension could set a precedent for future attacks on other outlets.

“If left unchallenged, the actions of the White House would create a dangerous chilling effect for any journalist who covers our elected officials,” it said.

US District Judge Timothy Kelly ordered the Trump administration to respond by 11:00 am (1600 GMT) on Wednesday and set a hearing for 3:30 pm.

Kelly, a former chief counsel for the US Senate Judiciary Committee, was appointed to the bench by Trump last year.

The White House had suspended Acosta’s hard pass after he sparred at a news conference with the president, who demanded that the reporter yield the microphone and called him a “rude, terrible person” when he did not immediately comply.

Acosta pushed back with more questions and a White House intern tried to take the microphone from the CNN journalist — an incident the Trump administration characterized as misconduct against the woman.

‘Grandstanding’
Hours later, White House press secretary Sarah Sanders announced Acosta’s hard pass had been suspended, a rare if not unprecedented move that she justified by claiming the reporter was inappropriately “placing his hands” on the intern.

Sanders then tweeted a video that she said backed up her narrative of the incident — but analysts said the footage was sped up to make it appear that Acosta struck the intern.

The press secretary on Tuesday dismissed the CNN legal complaint as “grandstanding,” vowing that the White House would “vigorously defend against this lawsuit.”

She alleged that Acosta “physically refused to surrender a White House microphone to an intern,” softening the earlier misconduct accusation and then casting blame on the journalist for his persistent questioning.

“The First Amendment is not served when a single reporter, of more than 150 present, attempts to monopolize the floor,” the press secretary said in a statement.

“If there is no check on this type of behavior, it impedes the ability of the President, the White House staff and members of the media to conduct business.”

CNN lawyer Ted Boutrous said the White Houses’s suspension of the press pass made “clear it was based on the content of the reporting.”

“CNN’s argument is very straightforward,” the lawyer told the US network. “We can’t have the White House tossing people out because they don’t like what they are saying or what they are reporting.”

“That is what happened. That is the First Amendment.”

‘Unconstitutional’
Both Acosta and CNN are plaintiffs in the lawsuit, which targets six defendants: Trump, Sanders, White House chief of staff John Kelly, deputy chief of staff William Shine, the Secret Service and its director along with the agent who took the banned journalist’s credentials.

In addition to requesting the return of the journalist’s pass, the network is seeking “a declaration that the revocation of Acosta’s press was unconstitutional,” according to the filing.

“The president of the United States should not be in the business of arbitrarily picking the men and women who cover him,” WHCA president Olivier Knox said in a statement.

Trump is no stranger to fights with the press: the president regularly labels unfavorable coverage as “fake news” and has threatened to ban certain media organizations from his events.

The New York-based Knight First Amendment Institute, which sued Trump and his communications team after the president blocked several people on Twitter who were critical of his policies, called CNN’s lawsuit “entirely justified.”

“It would be terrible for the public, and for our democracy, if reporters questioning the president had to operate under an ever-present threat of this kind of retaliation,” said the institute’s executive director Jameel Jaffer.