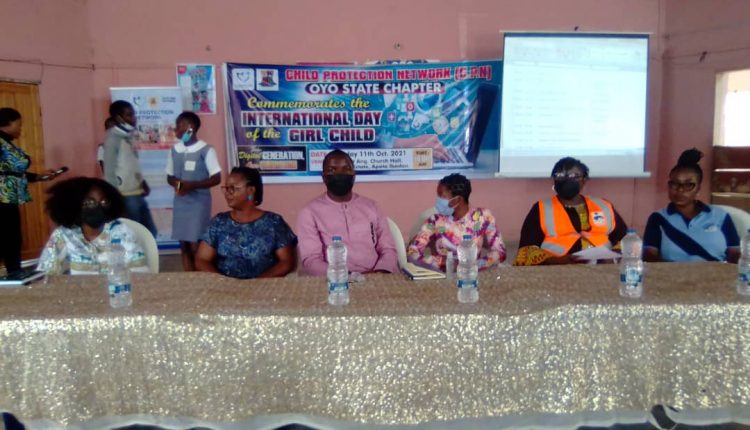 Experts, Lecturers in higher institutions, other critical stakeholders of child protection and Artificial Intelligence have stressed the need for the girl child to emulate prominent women in Nigeria who have made impacts in their various endeavours, saying she should not be constrained by discrimination and inequality she faces in the society.

They include the Chief Executive Officer of Robotics and Artificial Intelligence of Nigeria (RAIN), Dr. Olusola Ayoola ; a lecturer at the University College Hospital, Patricia Abokede, Mrs. Oluwatoyin Ogedengbe and others who spoke at an event organised by Child Protection Network (CPN) in Oyo State in commemoration of this year’s International Day of the Girl Child held in Ibadan.

At the programme which had the theme: ”Digital Generation, Our Generation”, the speakers urged the girls to emulate icons like Dr. Ngozi Okonjo-Iweala, Amina Mohammed, Obi Ezekwesili and wives of governors.

The speakers emphasised that girls would become prominent if they see those people as models.

Dr. Ayoola, said:” Do not be distracted and discouraged by community issues and the unpleasant news we hear all over the world.

Rather, they should have their focus on the fact that there are many females doing greatly well in the world today.

We have Dr. Ngozi Okonjo-Iweala who is the Director-general (DG) of World Trade Centre (WTO); Amina Mohammed who is the Deputy Secretary General of the United Nations (UN) and so many great women.

This should be the motivation, women should prepare themselves for the future without bothering about the constraints. When you don’t limit yourself to the current situation in the environment, you will be a great woman”.

A child protection activist and lecturer at the University College Hospital, Ibadan, Abokede, also urged them to rise above discrimination and abuses.

The Oyo State Coordinator of CPN, Mrs. Oluwatoyin Ogedengbe, said if they see those prominent females are as models for them, they would be inspired, motivated and inspired.

She therefore urged the Government to play its part in motivating and inspiring them, using people like Okonjo-Iweala Amina Mohammed and first ladies to encourage them.

Mrs. Amina Ayoola, said: “The child is very important. She is the mother of the nation. You can’t do without the girl child.

As female you can reach your potential. I want all to support the girl child and they should not be limited.

There are a lot of successful women in the nation and the world like Okonjo-Iweala, Amina ,Obi Ezekwesili and governor’s wives and that of the President and so many success women”.