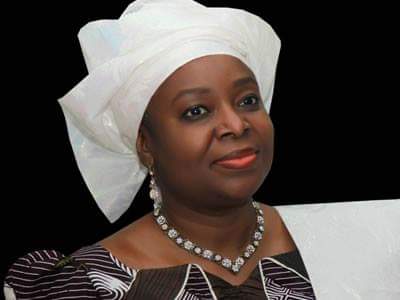 Chief Mrs. Jumoke Akinjide At 60: A Beacon Of Light: By Deji Ola

Over these years, women from different generations and locations, west,  south,  east and Limpopo north have proven their strength and independence.

Today, women have made exceptional contributions in all ramification which includes government, religion, arm forces, business world and so on. Around the world, there have been many women in positions of power with exceptional profiles mixed with various achievements.

No doubt *OLOYE JUMOKE AKINJIDE* is one of the powerful women in Nigeria. She has over these years proven to be worthy of emulation.  As she celebrates her 60th birthday,  no amount of rhetorical expression can be enough to celebrate her and I have decided to make this epistle expository as many people are not informed enough about her achievements as Special Assistant,  Minister and even in her private business.

Before going further,  it is important to fix my search light on her biography.

– Oloye as fondly called was born on the 4th of August, 1959. The former Minister of State for FCT, had her primary and secondary school education between 1963 and 1974 at Maryhill Convent School and St Louis Grammar School both in the city of Ibadan respectively.

– She also attended Kings College, London and University of London where she bagged a Bachelor of Law ( LLB) with Second Class Upper before she later proceeded to Harvard Law School where she obtained Masters of Law degree .

– She also attended the Nigerian Law School, Lagos campus where after which she was called to the Nigerian Bar in 1982.

– She passed her English Solicitors Final Examinations at the College of Law, London with first class Honours.

Verily, she performed excellently and this availed her opportunity to  be appointed as State Minister for FCT under former President Goodluck Ebele Jonathan regime. Her achievements in this office can never be over-emphasized. Because of this medium of communication, I will try as much as possible to be meticulous while I pick few out of her many achievements:

– She worked closely with her boss to construct a standard mini stadium at Kuje, Bwari and Abaji Area Councils.

– Under her watch,  FCT U-13 boys won the National U-13 Football Competition organized by the NFF two consecutive times.

– In FCT Area councils, several youths got employment through her clean and green initiative, Agriculture empowerment programme, Youth Empowerment scheme and Sure P this was also extended to Oyo state expecially her senatorial district.

– She was able to help over one hundred youths to secure job in various MDAs. The loan scheme she organized for market groups is still incomparable. She also assisted farmers in their numbers to mechanized almost all their processes.

We do not need to consult any oracle to know that these are qualities of a good leader who choses to serve people with all her strength.

The mother of all achievement is the initiative of Jumoke Akinjide Foundation which is rendering selfless services in the FCT and Oyo state.

One of their many activities that I found difficult to forget is the youth development and capacity Building initiative they take as their mission and vision statement.

The foundation organized series of health outreach, free surgery among others. Without mincing words, I can confidently say that  Oloye Jumoke is fulfilled and accomplished.

Aside the above mentioned achievements, I will like to itemize some uncaptured public services.

2. Chaired White Paper Committee on the report of the committee on Land Records and Allocations in FCT.

3. Developed Guidelines and Contracts documentation on public private partnership (PPP)  for provision of Mass Housing and

4. Developed and Implimented the Abuja Investment and Development forum.

5. Facilitated the medical mission of the Association of Nigerian Physicians in the Americans to Kaduna state.

I can’t agree less that her profile, educational background and landmark participation in governance has brought light in darkness.

What always baffles me is that, despite her wealth of  experiences, she is adorned with utmost humility, void of any oppression, backbite or conspiracy. She is a listening leader.

*Madam,  forgive those who insulted you, neglected you in the face of trial, attacked you, belittled you or take you for granted. But more than this, forgive yourself for allowing them to hurt you*

Surely,  they will soon realize their inadequacies and come for unconditional forgiveness. Continue to be our inspiring figure,  motivator, leader and  role model.

How I wish I can declare a public holiday just to allow your ardent followers to celebrate this uncommon age of yours. You are indeed a jolly good leader,  I say Live long!!!

We Will Not Increase Tax To Improve IGR – Oyo Govt