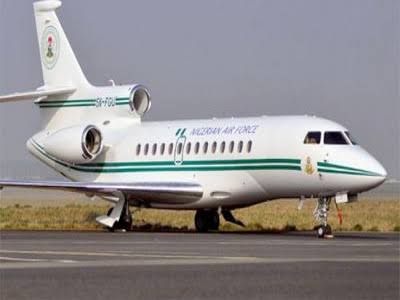 Under the regime of the President, Major General Muhammadu Buhari (retd), the Presidential Air Fleet has so far cost taxpayers a total of N41.9bn, contrary to the promise Buhari made during the 2015 presidential election campaigns to reduce waste in governance by downsizing the presidential fleet.

By the Presidency’s own admission, Buhari’s promise to sell some of the aircraft in the fleet was aimed at minimising the cost of governance.

In October 2016, the Senior Special Assistant to the President on Media and Publicity, Garba Shehu, assured journalists that some of the presidential jets would be sold in line with Buhari’s directive that aircraft in the PAF be reduced to cut waste.

Shehu added that some aircraft in the fleet would also soon be handed over to the Nigerian Air Force for its operations.

He said, “When he campaigned to be President, the then APC candidate Muhammadu Buhari, if you recall, promised to look at the Presidential Air Fleet with a view to cutting down on waste.

“His directive to a government committee on this assignment is that he liked to see a compact and reliable aircraft for the safe airlift of the President, the Vice President and other government officials that go on special missions. This exercise is by no means complete.”

Later in October 2016, the Buhari regime advertised the sale of two of a Falcon 7X executive jet and the Hawker 4000.

However, in March 2018, Shehu told Saturday PUNCH that the bid amounts agreed upon by the two preferred bidders for the two aircraft stood at $24m, which was the projected sales figure.

The presidential spokesman, however, said the unnamed winners of the bids reneged when they were asked to pay. According to him, they came up with a new figure of $11m for the two jets.

Describing the preferred bidders’ attitude as absurd, Shehu said under the Buhari regime, no one would be allowed to “take a public asset and run away (with it) for nothing.”

He added that the Presidency was still determined to sell the jets, which he said were still available for “serious buyers.”

The proposed sale recorded a lull in public attention until September 2020, when the Federal Government announced that the Hawker 4000 aircraft, with registration number 5N-FGX/: RC 066, had again been put up for sale

But purchase of the business-size jet, which entered into service in December 2011, has yet to be confirmed by the Presidency.

Upkeep of presidential fleet rises by 243% in six years

By comparison, the 2015 budget, which was in effect upon Buhari’s inauguration, earmarked N5.190bn for the presidential fleet. The appropriation for the PAF in 2021 indicates a 243.6 per cent increase from the allocation six years prior.

Each of the Falcon 7X jets were purchased in 2010 by the Federal Government for $51.1m, while the Gulfstream G550 costs $53.3m, according to a former Minister of Information, the late Prof Dora Akunyili.

Estimates from online listings and airline executives showed the factory prices for the other aircraft in the fleet as follows: Boeing Business Jet – $59m; Hawker 4000 – $22.9m; AgustaWestland AW139 – $12m; and AgustaWestland AW101 – $21m.

Meanwhile, Buhari’s frequent trips to the United Kingdom have drawn the ire of many citizens for the costs incurred in airport parking charges for the presidential aircraft.

Based on a tally of public announcements of Buhari’s visits to the United Kingdom for medical care, as of Friday, when he returned from his last trip, the President has spent 213 non-consecutive days having foreign check-ups.

Using the airport’s estimate, the Federal Government may have spent between N2,898,056.70 and N20,235,404.70 on parking a single presidential aircraft, just for the period the President has been in the UK on medical trips.

In January 2020, viral photos showed one of the President’s daughters, Hanan, disembarking from one of the presidential jets to the warm reception by Gombe State officials, reportedly to attend a traditional event in Bauchi State.

The President’s daughter, who had just graduated from Ravensbourne University, London with a first class in Photography, was said to have been invited by the Emir of Bauchi, Rilwanu Adamu, as a special guest of honour.

The durbar was reportedly organised specially to avail the President’s daughter of the opportunity to take photographs of the events, Bauchi architecture and other cultural sites in the state.

The Executive Director of the Socio-Economic Rights and Accountability Project, Mr Adetokunbo Mumuni, in an interview with Sunday PUNCH, criticised Buhari for failing to keep his promise, saying “litanies of un-kept promises” were typical of “our so-called leaders.”

Mumuni added, “It is fitting for a man (president) to make promises that can be kept so that, at any point in time he pretends to have forgotten and the citizens of Nigeria remind him that ‘this is proof of what you said earlier,’ he will then hasten to fulfil those promises.

“In any case, I don’t know what the Presidency or the President would be doing with all manner of presidential jets in an era when Nigerians are suffering, Boko Haram is ravaging the population, and there is kidnapping and insecurity all over Nigeria. It is important that those who rule us should pause for a moment to think of the general interest of Nigerians.

“Section 16 of the constitution of Nigeria, which deals with fundamental objectives and principles of state polity, says the primary purpose of government shall be the welfare, security and happiness of the people. It is only a government or a ruler that is able to provide these things that can lay claim to effective governance of Nigeria and not otherwise.”

The SERAP director added that it was important for Nigerians to impress on their leaders that their own comfort was more important.

Expressing dismay at the use of the presidential jet by Buhari’s daughter, Mumuni added, “When a public servant’s children flaunt the position of their father, it is an indication of their personal values and that is reflected in what we’re going through in Nigeria.”

Similarly, the Executive Director, Civil Society Legislative Advocacy Centre, Mr Musa Rafsanjani, argued that it was important for the President to fulfil his promise or own up to his failure.

Rafsanjani added that if the President did not reveal the challenges, Nigerians would not be able to appreciate or understand whatever challenges.

“I think public taxpayers’ monies are not being given the necessary responsible approach in terms of spending. For me, it is important that all other sectors in government that were wasting taxpayers’ money, especially in the face of recession and other economic challenges we are facing, find a way to minimise wastage and extravagance,” he stated.

On the use of the presidential jet by Buhari’s daughter, Rafsanjani added, “We have not seen this practice in Britain, the United States, and other countries even in Africa. We have not seen this constant and regular use of presidential jets by family members. As a matter of fact, when (the late President) Shehu Shagari was in government, his family was not even seen, not to mention always using government facilities (for personal activities).

“I think development happened when democracy came and so many things have been misunderstood and turned upside down; so there is a need to bring some level of sanity to the way public assets are used in Nigeria. In so many countries where democracy is practised, you don’t actually see this way in which our officials are taking public facilities as their personal facilities.”

The Presidency, however, defended Hanan’s use of the presidential jet, saying she had received approval from her father to be flown in the aircraft, who in turn informed the National Security Adviser.

Shehu said, “It’s true that a member of the first family was flown to Bauchi on a mission duly authorised. It wasn’t an impromptu or improper trip, because it followed normal procedure. The Presidency informed the National Security Adviser of the mission who in turn informed the Commander of the PAF.

Also commenting, the Executive Chairman, Centre for Anti-Corruption and Open Leadership, Mr Debo Adeniran, decried Buhari’s failure to fulfill his promise of shedding some of the presidential fleet.

Adeniran stated that for the sake of winning votes, politicians were fond of promising heaven and earth all in a bid to sell to the electorate the assurance that they would install good governance and make life more abundant for the constituents when they take office.

“But when they get there, it is a different ball game altogether. There are so many other interests that influence what they do and what they don’t do. Because they cannot act alone, all of these interests will prevail on them to do or undo. That might be what has affected President Muhammadu Buhari.

“Some people see him as someone who lives an austere life and doesn’t bother himself with all the ostentations of multiple luxuries. But then, there are so many people working with him who believe that they will benefit from what they met on the ground and would have prevailed on him.

“However, his integrity should allow him to be able to live up to his words, to distinguish himself as a politician with a difference,” the CACOL chairman said.

Adeniran, however, said Nigerians should not begrudge Buhari for his foreign medical trip.

He said, “We cannot say because of political promises, the President should stay here and die here if there are aspects of the healthcare delivery that are not readily available here.

“We believe that Rome was not built in a day. To redeem the health care delivery from what it was to what it’s supposed to be may not be a feat that could be achieved overnight.”

He, however, called for a policy directive showing that the government was serious about upgrading the health care system beyond the familiar rhetoric.