The government of Oyo state has said that only Junior Secondary School III students who passed at least six (6) subjects including English Language or Mathematics at Credit (C) level are qualified to be promoted and transit from junior school (JSS III) to senior school (SS I) across the state.

This was contained in a circular dated 11th November, 2020, addressed to all secondary school heads and secondary school administrators by the Oyo state ministry of Education on Thursday and signed by its Permanent Secretary, Mrs. A. B. Atere.

The ministry noted that Science Class should posses at least credit pass in basic science and technology and five (5) other relevant subjects.

It noted further that humanity class should posses credit in National Values and five (5) other relevant subjects. 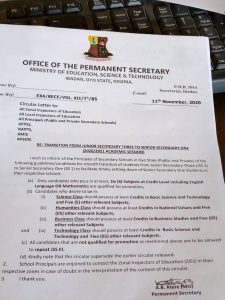 The ministry maintained that all candidates that are not qualified for promotion into senior school as specified should be allowed to repeat JSS III classes.