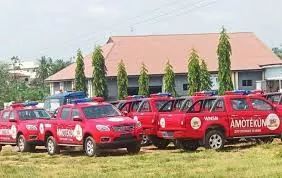 The long anticipated Western Nigeria Security Network codenamed operation Amotekun has been officially launched in Ibadan, the Oyo state capital today 8th day of January with the aim of providing adequate security for the south west region as a compliment to the statutory security provided by all the Nigerian security outfits.

The host governor of the launching Engr Seyi Makinde, the executive governor of Oyo state while delivering his brief address stated that if a mighty man faces its fear headlong even fear would vanish which was why the governors f the southwest are taking the bull by the horn by the official launching of Amotekun.

Governor Makinde stated further that as governors of these states it is their priority to ensure that all residents and visitors within the boundary of the region can carry out their legitimate business activities under a secured environment because security of their lives and properties are of paramount importance to the governors.

He added that no meaningful economic achievement can be recorded in a volatile and an unsecured environment noting that it was for this reason that the south west governors forum has followed through on its initial security summit held in Ibadan six month ago which birthed Amotekun.

“Our regional integration should be seen in one light and in one light alone, that we are coming together to fight a common enemy, that enemy is not Nigeria, the enemy and the element among us and their affiliates who are determined to cause commotion within the borders of our states and threatening our collective coexistence.”