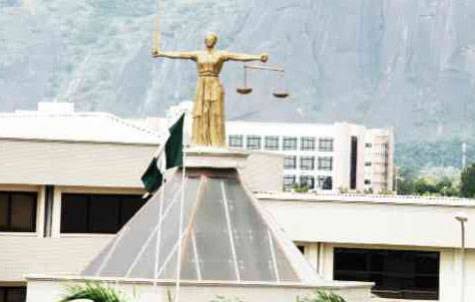 The Abuja Division of the Court of Appeal, on Wednesday, vacated the high court judgment that stopped the National Assembly from re-ordering the proposed sequence for the 2019 general elections.

The appellate court, in a unanimous judgment by its full panel of Justices, held that the Federal High Court in Abuja lacked the jurisdiction to entertain the suit that challenged the constitutionality of section 25 of the Electoral Act Amendment Bill, 2018, which sought to alter the sequence for the impending general elections.
It discribed the legal action that was instituted by the Accord Party as a deliberate attempt “to padlock” the NASS from carrying out its constitutional duties.
According to the appellate court, the high court ought to have dismissed the suit for being frivolous, premature, inchoate and non-justiceable.
The President of the Court of Appeal, Justice Zainab Bulkachuwa, who delivered the lead judgment, held that the lower court was bereft of the vires to assume jurisdiction and void a bill that was still undergoing the legislative process of becoming a law.
Though the appellate court noted that section 4(cool of the 1999 Constitution imbued the judiciary with the powers to review the exercise of legislative functions and determine the constitutionality of acts of the NASS, it said such judicial powers does not negate the principle of separation of powers enshrined in sections 4, 5 and 6 of the Constitution.

While upholding the appeal that was lodged by the NASS, the Justice Bulkachuwa-led panel stressed that a Bill does not become an Act of the NASS until it is assented to by the President pursuant to section 58 of the constitution.

It maintained that the constitution gave the President the right to the decline his assent to a Bill, following which such document would be returned to the NASS for further legislative action that could result in dumping of the proposed law or an override of the President by two-third majority vote by both chambers of the legislature.

“A court of law has no jurisdiction to decide on a Bill still undergoing legislative process. Such decision becomes null and void since it is not yet a law or an Act of NASS”, Justice Bulkachuwa held, adding that doing otherwise would amount to the court “unwittingly interfering with the doctrine of separation of powers”.

“The court cannot grant an injunction to restrain the legislature from performing its legislative duties. It should however be sounded clear that the court has the jurisdiction to strike down any law or Act of the NASS when found to be in contravention of any section of the Constitution”.

The appellate court held that the suit by Accord Party was “an action that was designed to obstruct the legislative powers of the NASS to make law”.

It further observed that as at the time the suit was filed before the high court, the NASS had yet to conclude its legislative duty as far as Amendment of the Electoral Act 2018 was concerned.

The appellate court warned that a situation where suits are filed to challenge Bills that are still undergoing legislative process, was capable of disabling the legislature.

It held that Accord Party failed to show how the proposed amended election sequence would affect its right as a political party, adding that the Independent National Electoral Commission, INEC, which was listed as the 3rd Respondent in the appeal, did not file a suit to challenge the purported infringement on or urspation of its powers by the NASS.

“The plaintiff’s locus standi in this case has not yet been disclosed. A claimant must have some justifiable interest that would suffer or show that he has an injury or damage to suffer.

“I am satisfied and I hold that this 1st Respondent’s action at the lower court was not justiceable. The suit was an academic exercise that did not raise any live and genuine issue in controversy for determination.

“The suit is frivolous and clearly an abuse of court process. I resolve the issue in favour of the Appellant. The judgment of the Federal High Court delivered on April 25 is hereby nullified.

“On the whole this Appeal succeeds, it has merit. The judgement of the high court is hereby set-aside”, the appellate court held.

It will be recalled that the NASS had in the Appeal marked CA/A 485/2018, which was filed on June 14, prayed the court to declare that it has the constitutional powers to amend the Electoral Act to re-order the election sequence already released by INEC.

In its 17 grounds of appeal, the NASS insisted that its decision to re-order the sequence for the 2019 general elections was in the overriding interest of the nation.

Under the proposed order, election of State and Federal lawmakers would be held first, followed by Governorship election, while Presidential Election would be conducted last.

The proposal was kicked at by those who believed that it was targeted at President Muhammadu Buhari.

However, in its appeal, the NASS, argued that, “The effect of Section 76(1) of the Electoral Act is that the power of INEC to fix dates for election must be exercised in accordance with the Electoral Act. And unquestionably, it is the Appellant that is constitutionally empowered to enact an Electoral Act for Nigeria – by virtue of section 4(1) and (2) and Item 22 on the Exclusive List.

“Respectfully, we submit that unlike under the original constitutional provisions, the 3rd Respondent (INEC) no more enjoys the freedom to fix dates for elections at will: such fixtures MUST be in accordance with the Electoral Act enacted by the Appellant. That is what the Electoral Act (Amendment) Bill seeks to achieve; yet the 1st Respondent we submit rushed to Court to challenge the National Assembly – when the conduct of the latter is constitutional.

“Respectfully, contrary to the conclusions of the Federal High Court in the judgment under review to the effect that it is only INEC 3rd Respondent herein that can fix the date for elections and move the sequence and therefore the Appellant is imposing on the 3rd Respondent a sequence of elections to the various offices listed therein. My lords, we submit that the lower court’s conclusions in this regard is, with respect, in error.

“We submit that by no stretch of legal imagination can it be contended that the new section 25 of the Electoral Bill is contrary to the provisions of paragraph 15(a) of the Third Schedule. Paragraph 15(a) of the third schedule is simply stating the powers of the 3rd Respondent to organize and supervise elections.

“Consequently, we submit that the proposed section 25, or clause 25 does not in any way breach the provisions of paragraph 15(a) of the Third Schedule to the Constitution or any other provision of the 1999 Constitution”, NASS argued.

The high court had in the verdict that was delivered by Justice Ahmed Mohammed, adduced reasons why the election timetable that was released by INEC could not be altered by the legislature.

Justice Mohammed held that INEC was the only body constitutionally empowered to organise, undertake and supervise elections in the country, adding that such responsibility included fixing dates for polls.

The high court maintained that moves to amend the Electoral Act commenced after INEC had released its timetable for elections, stressing that action of the NASS was in breach of paragraph 15a of the 3rd Schedule to the 1999 constitution, as amended.

the Attorney General of the Federation, INEC and Accord Party had through their respective lawyers, urged the appellate court to dismiss the appeal which they argued had turned academic.

The office of the AGF, via a letter dated June 18, notified the appellate court that the NASS had since expunged section 25 of the Electoral Act Amendment Bill, 2018, which sought to alter sequence for the impending general elections.

The AGF argued that the offending session was the subject matter of the suit that was decided by the lower court, upon which the instant appeal by the NASS was based.

He insisted that the issue had been overtaken by events since the NASS has already transmitted a revised version of the Electoral Act Amendment Bill to President Buhari for his assent.

The Accord Party had in its suit marked FHC/ABJ/CS/232/2018, posed nine questions for the lower court to determine, among which included whether, “Having regard to the combined provisions of section 79, 116, 118, 132, 153, 160(1) and 178 of the Constitution of the Federal Republic of Nigeria, 1999, as amended, read together with paragraph 15(a) of the Third Schedule to the same Constitution, whether the 3rd defendant is not only institution or body constitutionally vested with the powers and vires to organise, undertake and supervise elections to the offices of the President and Vice President of the Federal Republic of Nigeria, the Governor and Deputy Governor of a State, membership of the Senate, the House of Representatives and the House of Assembly of each State of the federation, including fixing the sequence and dates of the elections to the said offices?”

12 Lawmakers in Sokoto Pledges loyalty to Buhari, As Tambuwal defects to PDP