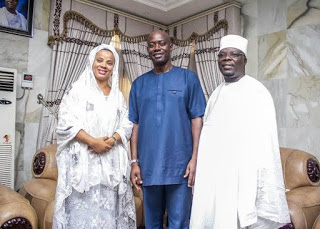 Bolanle Aliyu Sarumi Defects To PDP, May Emerge As Commissioner For Women Affairs

Bolanle Aliyu Sarumi the beautiful and amiable candidate of the National Interest Party, NIP, in the just concluded governorship election in Oyo State,

Has defected to the People’s Democratic Party,  And may  emerged as the commissioner for Women affairs.

Given reasons for her defection three days after The Anchor Online exclusively reported that she was calling it quits with the NIP and fusing her BASA political movement with the PDP, Sarumi-Aliyu explained in a statement that “the decision was arrived at after due consultation”.

It was reliably gathered that the Oyo State governor-elect, Engr. Seyi Makinde and Sarumi-Aliyu met at the Ikolaba home of the Aare Musulumi of Yorubaland, Edo and Delta States, Alhaji Dauda Makanjuola Akinola De-Damak shortly after the March 9, 2019 governorship election. A meeting sunrisebulletin.com learnt was initiated by the highly respected Aare.

She said “what we stood for, even in NIP was that Oyo State indigenes deserve the very best in terms of governance. And I am sure many people will agree with me that things can be better than what obtains presently. The conscientious efforts of the Governor-elect, Engineer Seyi Makinde to make things better over the years, even when he was not holding any elective position have proved him to be a honourable, forthright and noble spirited person”.

Continuing, Sarumi-Aliyu, who prides herself as the ‘Jagaban of the masses’ also stated that “I cannot hold in all the good plans I have and I will gladly give them to the Governor. I am drawn to him mainly because of his philanthropic activities and secondly, he didn’t get there through the effort of any godfather, God Himself made it possible. So, he is a good choice”.

Inferring that there might actually be a working relationship between the NIP and the PDP, Mrs. Sarumi-Aliyu pointed out that “our presidential candidate actually stepped down for Alhaji Atiku Abubakar. And I must also state that the move is in the interest of the people. I will assist the Governor if given the opportunity so he can serve well”.

She also urged the people of Oyo State not to use the Ajimobi administration’s eight year-rule as a yardstick for measuring the success of the incoming administration. “Four years may not be enough to make the desired change in Oyo State as a lot of work needs to be done. The earlier we start to tackle the challenges facing our dear state, the better. I look forward to living in a robust state that provides ample opportunity for her citizens to thrive”, she concluded.

Sunrisebulletin.com also gathered  Bolanle Sarumi Aliyu may be one of the candidate the Aare Musulumi has penned down to work with the Oyo state governor elect Seyi Makinde.