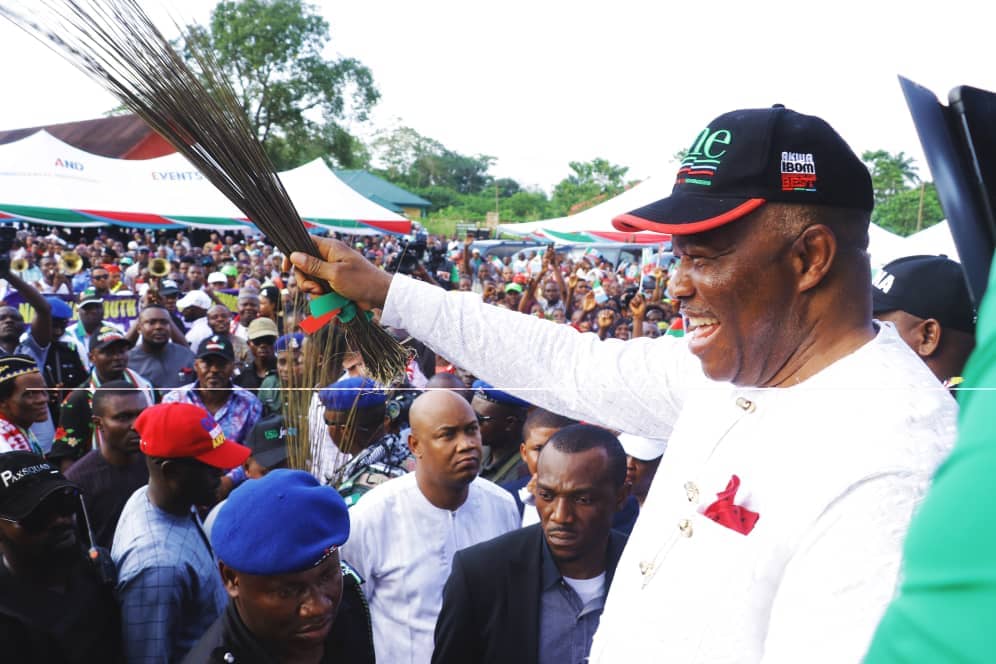 According to him, there cannot be meaningful progress in the country in the absence of peaceful co-existence between people of diverse political leanings.

Akpabio, who was speaking during the official reception of decampees from the Peoples Democratic Party (PDP) to the All Progressives Congress (APC) at Odot, Nsit Atai Local Government Area of Akwa Ibom State, condemned the spate of destruction of political campaign billboards in the state, and lauded members of the All Progressives Congress (APC) for not following suit.

A release from Senator Akpabio’s Media Office and signed by Jackson Udom, special Assistant of media to the Senator, quoted the former governor of the state as saying, “If you look outside this venue, you’ll see the posters of the outgoing governor, Udom Emmanuel, they are not torn, it shows that APC is a peaceful party. While coming down here, along the Airport Road, you’ll notice that the billboards of the APC are all torn.

We are for peace, Nsit Atai is for peace. Let me assure us all that they can only tear your posters and billboards but they cannot tear your votes come 2019.”

He said APC will record a landslide victory in Akwa Ibom State as reward for the goodwill done the state by President Muhammadu Buhari, highlighting that Akwa Ibom people have benefited from the federal government through employment, projects, and social intervention programmes like N-Power. PDP did nothing for the state in 16 years.”

Receiving the decampees, Mr. Ini Okopido said their defection signalled the demise of PDP in the area, and assured them of equal privileges.

In their separate responses, the trio of Chief Sunny Elijah, Rt. Hon. Udo Darby and Hon. Sarah Elijah, said Nsit Atai people have been betrayed by the PDP.

They frowned at the dismantling of the single term zoning arrangement for House of Assembly by the PDP.

They assured the APC flagbearer for the House of Assembly, Princess Blessing Osom, of their support.

In her remarks, Princess Blessing Osom assured the APC of victory in Nsit Atai in 2019. She reiterated her resolve to offer effective representation to the constituents, if elected.