Ataoja Calls On Federal And State Governments To Commit More Funds For The Upliftment Of Osun Oshogbo Groove.

The Ataoja of Osogbo,Oba  Jimoh Olanipekun Oyetunji has called on the federal and state government to devote  more resources to the Upliftment of the UNESCO world heritage site ,the Osun Osogbo Groove .

To Oba Oyetunji ,more resources committed to renovation and upgrading of the  groove will help promote tourism which will in turn generate wealth for the state and the nation at large. 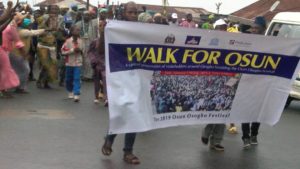 The Ataoja said this while addressing newsmen in Osogbo  shortly after receiving residents of the town and devotees who thronged out on a road show tagged ‘Walk For Osun ‘to herald the commencement of the 2019 Osun Osogbo Festival .

The Monarch who later received the guests consisting of both Devotees from the Diaspora and Nigerians from across the country   blessed the worshippers as they paid homage to the Traditional Ruler .

Oba Jimoh Oyetunji used the occasion to debunk the rumour that Osun had been sold out stating that   Osun Osogbo is a spiritual,  deity and an emissary of God which cannot be sold or bought by anybody. “In fact, it is not a physical property,” he said .

‘I want people to realise that the festival of Osun will come up in 2019/in August as we usually celebrate every year ,that is why we are starting that of this year with a special program which is walk for OSUn .the people living in Osogbo Comprising all ethnic groups now have moved round Osogbo to tell the people that Osun still remains where it had been since the time of Larooye Gbadewolu ,the first Ataoja of Osogbo who came in contact with the spirit and the Spirit commanded him by way of covenant that it will be supporting him tonlet his town develop and grow and the children that will be producing will be offsprings that will have good benefit and that his city will remain the largest in his environment which we have realised today ‘he added .

“So Osogbo being the state capital has been a great city since then .The walk is just an awareness that we are creating .The state and Federal government have really been encouraging the Osun Osogbo festival in many significant ways since it has been made an Heritage site ‘he explained .

‘I will only implore that the Fedral government pays more attention in terms of funding to the site to make it a site that will generate funds for the state and the nation .If the federal government supports further that there will be better development for the Grove whereby there will be inlet and outlet gates separately ,so that we can get people to be paying token to see the place and thus will generate revenue for the government .We have been planning it for the past five years but we need government to embark in construction of new road that will separate the pedestal toad from thatbof the visitors who will come as visitors or tourists and people who want to receive blessings from Osun .so government is encouraged to promote tourism at all levels ..

The consultant for the 2019 Osun Osogbo festival Toye Arulogun told newsmen that the walk for Osun is a show of the difference about this year’s festival .The walk according to him is to foster unity among the residents of the state .

‘You would see that apart from creating awareness ,the walk is also a statement in peace ,unity and oneness among the ethnic nationality and the people of Osogbo .’Arulogun stated .

“We are also working on a better event plan  management of people to ensure that people come and have a good time .Also we are assuring the people that despite all that is happening in Nigeria now as regards security, we are working so hard to make sure that anyone who comes for this festival is safe and everything goes peacefully .’He added .

The  2019 Osun Osogbo festival is expected to have various programs such as the Iwopopo (Traditional cleaning of the city) ,The Osun festival Youth Symposium (ONSU),The Lighting of the Mystic 16 Points Lamp known as the Olojumerindinlogun ,the Iboriade (Ataajo’s crown Assemblage ),Ayo Olopon Contest amongst others before the grand finale which is the Grand procession to the groove  .