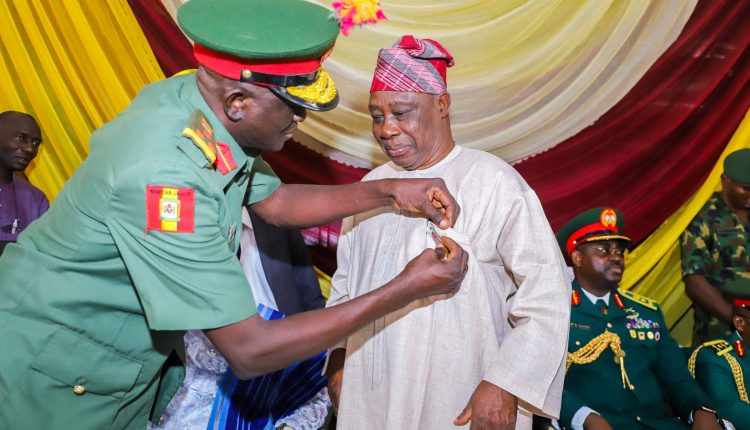 Governor Seyi Makinde has drawn attention to the Pathetic plight of some of our heroes and the need to cater for their Welfare, the governor who was speaking through the Deputy Governor Barrister Bayo Lawal at this year launch of appeal week emblem for the year 2023 Armed Forces Remembrance Day held at the Parliament Building at the State Secretariat, noted that

“This Occasion Apart From Being Designed To Honour Our Gallant Veterans Dead Or Alive, Its Also Meant To Sensitize The Public To The Pathetic Plight Of Some Of Our Heroes And The Need To Cater For Their Welfare. In a statement signed by Omolere Omoetan Senior Special Assistant Media to the deputy governor, Makinde maintained that ” Indeed Surviving Veterans And Families Of The Fallen Heroes Deserves More Than A Fair Treatment From All And Sundry.”

The statement further quoted the the governor as stressing that ” It is important to note that armed forces remembrance day celebration (afrdc) is a solemn celebration meant to honour our fallen heroes who laid down their lives and lost Their Limbs While Serving Humanity During The First And Second World Wars, Nigerian Civil War And Those Who Served Or Are Still Serving At Various Theatres Of Conflicts, Peace Support World Wide And Even Internal Security Operations”.

“Going Down Memory Lane, This Event Was In the past celebrated On the 11th Day Of November, That Is “11/11” and was otherwise referred to as “Red Poppy Day” when funds were raised from sales of Red Poppies For Veterans Of The World Wars.
He however noted that in Nigeria, It Is being celebrated on the 15th Of January, every year and more importantly to commemorate the end of the civil war In which many Soldiers lost their lives to foster the unity and peace of our dear nation.

Governor Makinde also noted that “This Contemporary Time, Global Peace And Security Have Been Under Constant Threat, Many Peace Keeping Operations Are Ongoing, Involving Combined Military Forces In The World. Nigeria Being A Prominent Member Of The Global Body Has Found Herself Involved In Many Of These Peace Keeping Missions Within And Beyond The Borders Of Africa. However, It Is On Record That Many Of Our Soldiers Lost Their Lives In These Exercises Leaving A Lot Of Responsibilities For The Unprepared Families.”

He applauded the concerted efforts of both the Federal and state governments at combating insurgency, brigandage, and Kidnapping in the country.

“It Is Imperative To Mention That There Is The Need For All And Sundry To Consciously Care For The Needs Of Maimed Soldiers, Their Widows, Their Children And Other Dependents Of The Fallen Heroes. The Week Long Remembrance Activities Include Amongst Others; The Launch Of Emblem Appeal Week, Special Prayers In Churches, Mosques, Honouring The Veterans, Empowerment Of Widows And The Disabled Which Will Reach A Climax At The Grand Finale And Wreaths Laying Ceremony On 15 January, 2023 At The Remembrance Arcade, Agodi, Ibadan.

He commended the Oyo State Chapter for their various activities aimed at improving the lives of veterans and dependents of falling heroes.

Makinde appealed to Industrialists, commercial firms, Organizations, Philanthropists And All Individuals To Donate Generously To The Armed Forces Remembrance Emblem Appeal Week Fund, so as to support the Disabled And Less Privileged X-servicemen And Women. Whatsoever Help You Rendered”

The governor launched the 2023 Emblem And Other Activities With A Sum Of N 3 Million.

Barrister Bayo Lawal who represented the governor also made a donation of an undisclosed sum amount at the emblem launch.