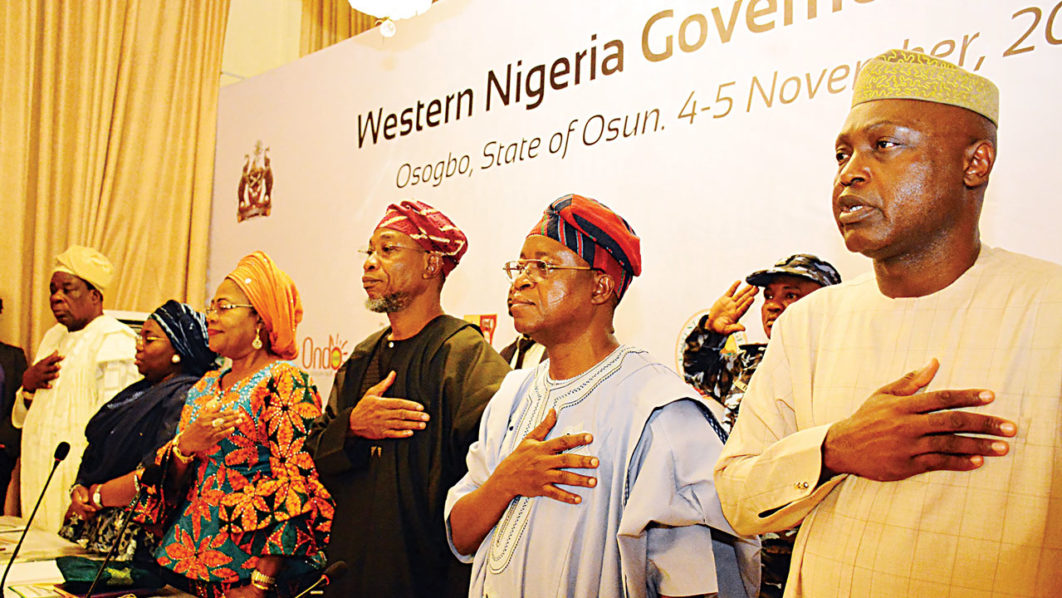 The Southwest Governors’ Forum has expressed concern on economic and security challenges posed by gridlock in the Apapa port and urged the Federal Government to create alternative routes.The forum said the planned alternative routes linking Tin Can Island through Tomoro Island to Ibafo in Ogun State should be revived urgently. In the interim, it suggested that government should enhance the capacity of the Nigeria Railway Corporation (NRC) to evacuate goods from the port to alternative terminals.

In a statement at the end of its meeting in Osogbo, the Osun State capital, yesterday, the forum reiterated its commitment to regional integration as a key to sustainable development in western Nigeria.The statement, read by the Secretary to the Ekiti State Government Biodun Oyebamibi (who represented Governor Kayode Fayemi), urged the Development Agenda for Western Nigeria (DAWN) commission to initiate processes to tackle decline in critical sectors in the region.

The forum said the recent report by the United Nations Children Fund (UNICEF) on out-of-school children in Nigeria should be addressed properly. It urged the Odu’a Investment Group to champion food security in the region. The forum also asked the DAWN commission to engage institutions and development partners in accessing soil features in the region to boost agriculture.

“A realistic balance between governance, competing local interests and profitability must be of utmost consideration in factoring Odu’a Investment Group’s presence in states. Regional integration as a model for sustainable development is in the enlightened interest of Western Nigeria and the people should eschew divisive elements and actions,” the forum said.

The host, Osun State Governor Rauf Aregbesola urged the forum to show greater commitment to regional integration. He said this was key to creating a formidable front to enhance development.He re-echoed calls for restructuring of the country and urged member states to remove barriers to quick development. His deputy, Titi Laoye Tomori, urged the forum to use agriculture as a means to engaging youths and women in the region.

President Muhammadu Buhari meanwhile restated his administration’s commitment to developing the country’s transport and power infrastructure. He spoke when he received members of the Association of Retired Career Ambassadors of Nigeria (ARCAN) led by their president, Oladapo Fafowora. Buhari, according to his Special Adviser on Media and Publicity, Femi Adesina, told the retired ambassadors that Nigerians will never forget the “lost opportunity between 1999 and 2015,” when the nation had huge resources at its disposal.

He said: “There is no part of the country I haven’t been to, having attempted to be president four times. I know the condition of our roads. The rails were literally killed. There was no power despite the admittance by some previous leadership that they spent $16 billion on the sector.
“Today, we are getting our priorities right and we believe that of the three fundamental issues we campaigned on – security, the economy and fighting corruption – we have remained very relevant and Nigerians believe we have achieved something.”Buhari also used the occasion to appreciate the People’s Republic of China for financing some of the rail and power projects in the country through concessionary loans.
“I will do my best to see that where there are possibilities of making a quick improvement on infrastructure, we will do it,” he said.The president took note of some concerns raised by the retired ambassadors including an appeal for the adjustment of their pension entitlements, retention of diplomatic passport for retired career ambassadors, allocation of land for ARCAN headquarters in Abuja and adequate funding of the foreign affairs ministry.