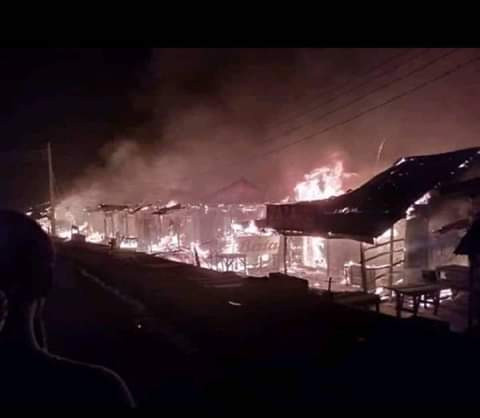 Oyo State attacked a fire station in protest after the popular Akesan market went up in flames in the early hours of Sunday.

Akesan market is famous for sale of wide range of food items, local artifacts, clothing materials, household utensils and more. Goods and valuables worth millions of Naira were said to have been destroyed in the fire.

Eyewitnesses said that the inferno started around 12:30am. Although the immediate cause of the fire is yet to be confirmed, some people, however, attributed the incident to electric spark.

Traders were seen wailing and weeping profusely as all efforts to quench the fire did not yield positive response, it was learnt that the firefighters from Oyo could not move to the scene of the incident because their equipment was not in good shape. The Fire Station in Oyo is only 20 meters to the market.

The people of the town reportedly went wild with rage when the official on duty told them that they could not do anything to quell the raging fire because there was no water in their fire truck. Some of the traders called for help as they stated that most of them borrowed loan from Microfinance banks and need to repay.

The enraged mob reportedly set up the truck and other property at the Fire station on fire in protest.

Firefighters from Ibadan had arrived at the scene with a backup from Ogbomoso to battle the inferno.

A community leader who was also at the scene, urged the government  to reconstruct the market and support the traders with no interest loan.

Osun Battle Of Supremacy: Oyetola And Aregbesola Tears APC Apart, Loyalists Rage At Each Other